It’s been quite a week! And not just for Massively Overpowered. Right as our original site was sunsetting, SOE announced that it was bought out and would be doing business under the new moniker Daybreak Games Company. Talk about shaking things up! Breaking free of Sony and going under the umbrella of an investment firm is just a wee bit of a change, and it is one that understandably had players nervous about future of the studio’s games. What will happen to the older titles like EverQuest and PlanetSide? What about those in development like EverQuest Next and H1Z1? CEO John Smedley assured players via Twitter that all the games will continue on. Time will tell. However, there was one immediate casualty in this whole changeover: SOE Live. And then in a huge punch to the fan gut came many more casualties in the form of multiple dev layoffs.

What will this all mean for players? As far as the convention side of things, a group of fans refuse to let 2015 go by without an annual gathering of Daybreak Games players and is organizing a summer get-together. But will we even have games to celebrate come summer?

While it may take a little time to get used to a new name (DGC just doesn’t roll off the tongue like SOE does), the change didn’t really affect me too much at first– emphasis on at first. I didn’t feel I had too much tangible cause for concern… until the announcement that SOE Live is canceled, that is! (I’ll get to that more in a minute.) Then came the part that truly like I was slugged: key folks from the dev teams were dismissed. I can’t say let go because that feels too benign, and this was definitely more painful. Though they weren’t fired, it feels like a firing squad was dispatched! Honestly I am shocked, dismayed, and a lot more concerned than ever about the future of my favorite worlds. 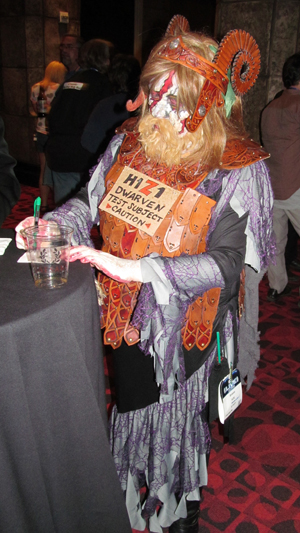 The first wisp of news came literally as I was heading out the door to catch my flight: Linda “Brasse” Carlson, the head of DGC’s community management department, was no longer employed. I seriously couldn’t believe it! I thought, “You’ve got to be kidding? She’s the face and personality of the company. I mean, the only other person who fills that role more is Franchise Director Dave Georgeson.” Yeah. I could kick myself for jinxing things; I couldn’t even get out the door before Georgeson confirmed he, too, was off the team. I stewed in that knowledge until I landed, only to find that so many more great people were also dismissed. Worst start of a vacation ever.

The joke about Daybreak Games meaning “Dey Break Games” is no longer so funny. I have serious concerns about how the games will be developed going forward and even whether the games will be developed. Will my wonderful worlds of Norrath even be around when I get home, let alone years down the line? I never really imagined there could be an end to EverQuest and EverQuest II. I mean, these games were the pet projects, the babies of the company. They would easily be around as long as SOE was… oh. Right.

I can’t even totally process what all these changes will mean for the games. No lore dev for EQ Next? Losing the creative director for EQ and EQII? How can there even be an EverQuest title without Georgeson? I mean, look at the shock we experienced just when we lost Georgeson’s ponytail, so now to lose Georgeson himself? I have to say, I am just incredibly heartsick. These people were all amazing people, excellent at their jobs, incredibly passionate about the games. Their enthusiasm was contagious, which helped bring more people into the fold as well as buoy players when things were hard. We had faith in the games at times because the devs had faith in them. They loved the games, and you had to love them for that.

I’ll be able to collect my thoughts more, but for now all I can say is that this sucks. Freaking blankity blank blank blank sucks. And to all those affected by these dismissals, I feel for ya. I know the feeling of surprisingly losing a job you love. And I sincerely wish you the best in all you to. I will be watching where in the gaming world you land. Our worlds will not be the same without you.

Fan Faire returns to its roots

Now for the one bit of bright news. If you couldn’t stand the thought of not meeting up with your guildmates and friends at the annual convention this year, you don’t really have to. Because a collective group of fans is working to bring it back, old school style.

Of all the gaming conventions that I have attended, SOE Live was my favorite. With its genuine family reunion feel, it was an experience that I thought everyone should be blessed to have. I was really looking forward to this year’s gathering, not just for the news and dev interaction but also because I was going to be meeting up with some Massively Minions guildmates as well as another Massively staffer. Needless to say, I was bummed at the cancellation.

It seems others were just as sad to see it go as I; in no time at all, fans had resurrected the idea of Fan Faire. You see, before SOE Live became SOE Live, it was a fan-created gathering of EverQuest players who wanted to revel in their shared passion for the game. From those humble beginnings the event grew into the massive officially sponsored weekend convention that we’ve known these past few years. The 2015 incarnation, dubbed Project Fan Faire, is slated for the weekend of August 14th through the 16th in Las Vegas.

It isn’t just fans reviving this gathering, either. Although the con isn’t officially endorsed, Brasse showed support for the initiative prior to her layoff by inviting folks to follow the project on Facebook. Could there be more of an official presence once everything is put together? Maybe. (If folks from the new parent company show up, however, their welcome might be less than cheerful.)

Fan can be short for fantastic

I can understand that after all the glitz and glamour of the past two years, some folks may not be as excited about the convention because it is not being sponsored by the studio itself. I, however, am enthused to see that players don’t want to see this massive reunion skip a year. I certainly do not want to! We’ve already seen what great things happen when a community bands together to save something they love and appreciate — just look at our very own MOP Kickstarter. Indeed, it is the communities that make gaming great, and I have already mingled with many of the players of this DGC community, so I am looking forward to how this community pulls together for this event. My only worry right now is hat there won’t be any games left by then for there to be fans of! There is also a chance that the latest news derails the plans for this event, but it might also bring people together in a time of mourning to show solidarity as a community and commiserate together.

Will I be able to attend? I can’t say for sure yet, but I really hope to! Maybe I’ll get to see you there.

Speaking of changes, you might have noticed that the column moniker of Norrathian Notebook has been altered a bit. But don’t worry; it’s going to be the same great news and thoughts about all things Norrath — just less of a mouthful to say!