END_OF_DOCUMENT_TOKEN_TO_BE_REPLACED
In the midst of this rebirth of Massively, I found myself suddenly placed in charge of my Star Wars: The Old Republic guild. We are on a roleplay server because we like to be friendly to roleplayers, but we are not strictly a roleplay guild. I’m actually happy with that stance. I would like there to be more roleplay in my guild on a roleplay server, but being accepting of non-roleplayers allows us to recruit the player and not the character. And that’s the way guilds should be, right? With my taking over as guild leader, it’s a time for new beginnings.

Right now just happens to be a good time to get into the game for the first time or as a returning player. In fact, let me give you eight reasons why now is the perfect time to jump back into Star Wars: The Old Republic.

I know that everyone says that his or her favorite game’s community is the best community in all of MMOs. I concede that some MMO communities are really great. I am a fan of the Guild Wars 2 community and the Elder Scrolls Online community myself. But in Star Wars: The Old Republic, the community that’s playing the game right now is the core community. There are no big expansions or patches coming out. The double experience weekend just ended. The people who are playing right now are the people who play it because they love the game, no gimmicks, and that passion shows through in chat, grouping, and guilds. 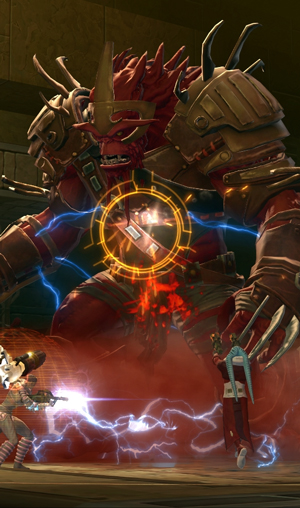 Many people like to say, “There is nothing to do in the game anymore. I’ve already done everything.” I guess it’s possible that some people have done everything. But the truth of the matter is that there is so much endgame that most people really haven’t done it all. For instance, have you found all the holocrons on Rishi? I don’t think most people have. What about defeating the bonus boss in the Battle of Rishi hard-mode flashpoint?

The community team for SWTOR recently announced the schedule for the next couple of months. Season four of PvP started last week. The Gree event starts fresh at level 60 next Tuesday. Today, you can catch the tail end of this most recent Bounty Contract week, but if you miss this one, a new Bounty Contract week starts on March 10th. There’s plenty of fresh stuff to do.

This might not seem like a good reason to come back to the game, but a major complaint from endgamers is that the hard-modes and nightmare-mode operations have been too easy for certain guilds to pass. At the time of this writing, only a handful of guilds have passed hard-mode Temple of Sacrifice. That’s hard-mode. Even Fridge, a raid leader from Death and Taxes, believes that the last boss is overtuned. I challenge those raid guilds who think that SWTOR raiding wasn’t tough enough to do the new hard-mode operations and stick around when nightmare-mode is launched.

I have had a hard time getting into the new flashpoints because I have had so many other things going on, but the times I’ve hopped in, I’ve had a blast. I understand that the Republic side likes to complain a bit more than the Imperial side (which is why everyone should play Imperial), but overall even the tacticals are extremely enjoyable. There’s enough challenge that you have to pay attention but not so much challenge that it seems like work.

I don’t want to give the impression that everything in PvP is perfect. I have been a major critic of the Discipline leveling system, but I’ve seen surprisingly few complaints about one or two classes completely dominating PvP like I used to. Of course, not every spec of an Advanced Class is viable, but all healing classes are good for PvP, and at least one spec of every AC works well.

You might be thinking, “I’m not in a guild, so why would I want to do conquests?” Although conquests are a great way for guilds to show unity, individuals can do conquests, too. Many of the conquests fall in line with the event of that week. Right now, the conquests focus on Section X, Oricon, Rishi, and Yavin 4, which are amazing solo areas. And as a solo player, you can earn Jawa mats, which can be traded for crafting mats that can be sold or used yourself.

I know housing isn’t everyone’s cup of blue milk, but I am in love with strongholds. The breadth of customization is a lot larger than I ever expected. Of course, there are still a few hitches, but I have personally been able to make some great-looking homes for my characters.

I always recommend that newcomers join The Ebon Hawk server because I like the idea of roleplayers (and my readers!) being within playing distance, but the Harbinger and Jedi Covenant servers are wonderful for PvE too. PvPers will likely want to jump on the Bastion. On the European side, I suggest Progenitor for roleplayers and The Red Eclipse for those who want a little less RP in their MMORPGs.

Lastly, I just want to mention that I am always hunting for topics for the Hyperspace Beacon. Sure, I have plenty of ideas because I can’t not talk about this game, but I want to know what interests you too. Let me know in the comments what you’d like to read, or send me a tweet or email. And may the Force be with you.