It’s been said that The Secret World is more like a single-player game. And it’s true: You can definitely enjoy many aspects of the game solo or with just a friend or two. But there may also come a time when you want to be a part of a larger group, especially when trying to run nightmare-mode dungeons or crawl through the lairs. In that case, a cabal becomes pretty desirable. Just like guilds in other games, TSW’s cabals are a conglomeration of fans who usually have a common thread that ties them together, be it play times, playstyles, or whatever else. (It wouldn’t surprise me to see a cabal of just fashionistas!) The trick is actually finding folks who have those commonalities.

That’s where the player-run Cabal Pride event on February 21st comes in. Starting at 2:00 p.m. EST on Saturday, this event is all about matching unguilded players with potential cabals. 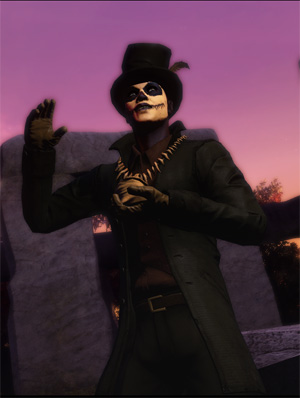 Other than randomly bumping into the perfect group in game, most players are limited to finding a compatible collection of friends to game with through shout-outs in chat forums. Even when you find a few possibilities, you can have trouble connecting with people to learn more. That’s why having one large gathering can be helpful.

Building off the success of last year’s recruitment event, three entities are taking part in pulling off this parade/carnival/party extravaganza. The cabal Nine Swords is hosting and has teamed up with Grid Stream Productions to broadcast the event live. The Sanctuary, an in-game chat channel and accompanying forums that offer a place for the whole community to come together, is sponsoring and getting the word out. It’s a community effort for the community to build more community.

As a cabal-less player, you may wonder what your part is in this whole shebang. It’s pretty darn easy. Basically, you show up to the procession in London, listen, and see what catches your attention. If you like something you see or hear, go talk with cabal representatives after the parade. You might very well come out of it all with a new cabal chat channel and a group to do collaborative things with.

What if you are a cabal wanting to attract the attention of future members? Your part to play is a bit more involved. First, a representative of your cabal needs to contact the hosting cabal Nine Swords with some pertinent info; this can be done right on the thread in TSW’s official forums. There, you share your cabal name, a main contact person, and your faction, as well as a brief overview of your cabal that the broadcasting DJ from GSP will read to promote you during the event. Additionally, you’re requested to divulge what your cabal will be doing as it strolls down the parade route (suggestions offered are dancing, waving, marching in uniform, etc.).

On the day of the event, cabals will literally parade past London’s Albion Theater, flanked by spectators who line the streets, all while being announced audibly over the airwaves and by text in a special event chat channel (/chat join cabalpride). When the parade concludes, both cabals and prospective members can meet up in the park and chitchat while GSP continues to entertain.

Community is as community does

I am always impressed with The Secret World community. Even though there are always detractors and trolls and other not-so-nice sorts, on the whole the community in TSW is top-notch. And community-run events are just one manifestation of that. I am proud to be a part of this community! If you are as well, jump in and support this community-building event; it’s sure to be an entertaining time. Rumor has it there will be competitions and prizes involved as well!

I recently came back to TSW for the first time since launch.

Huldra seems very quite, but I’m am looking for an aussie cabal and was wondering if anyone in here had any info on one. It seems the recruitment thread are very very old and last coment seen to be from 2012.

Estranged I ended up going with the League of Monster Slayers. I really wanted a multi-faction cabal, as I’m more about finding a fun group of people to play with, than any faction-specific stuff. They were really friendly, happy to answer all my questions, and their site shows a lot of activity, which tells me their cabal is active, too.

Hopefully, this means more dungeons for me, and some help in some of those Transylvania missions where one person (even with a good build) has a real uphill climb. :)

Estranged Me, too. Seriously huge turnout, and found a new cabal. :)

El Furioso Actually scrap that.  Brain straighteners would be better.  AND no she does not read Massively…. ;p

El Furioso CultOfXtc No problem. Actually my gf could do with some of those – Head (not hair) Straightners!

Thanks for the head straightening!

El Furioso Well you’re in luck as it doesn’t start for 14 hours :)

I couldn’t make it today, unfortunately. My old cabal has fallen by the wayside, so was hoping to find a new one. How did it go?

SomewhatEclectic mysecretid Mh FFXIV only allows one guild BUT also a number (8?) of linkshells, which are almost guilds. TESO is 5 per account though, not per character, since you sign with account (GW style). Then there’s also games that allow custom channels, like TSW and Aion, whichcan supply some function too…can’t think of any others that allow many guilds, although I’d like it. Wildstar maybe? I remember something similar for it.