It might be premature, but I’m pretty sure that the Revenant is my favorite profession in Guild Wars 2. And strangely, it’s because it offers a twist on the usual process of swapping between skill sets.

When the Revenant was first announced during this year’s PAX South, I was more than a little leery. At a glance, it was yet another figure in heavy armor with vaguely death-related powers, the sort of thing that’s so ubiquitous now as to beat out characters named after figures from Game of Thrones. It also evoked the Ritualist, which was one of the classes from Guild Wars that a lot of people loved but held no real resonance for me. Having played it now, though, I think it was a bit undersold because I was reminded of one of my favorite classes from the original Guild Wars as I played, and I was pleasantly surprised at just how novel the game’s take on a rather familiar lineup of tropes felt in action. 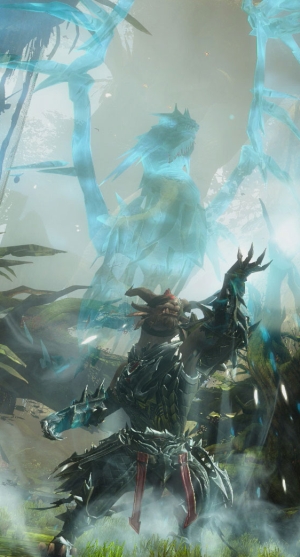 At this recent game demo at ArenaNet’s studio in Seattle, the playable Revenants had two choices of weapons: two-handed hammers or a paired mace and axe. Unlike many other physical classes, though, the Revenant has no option to switch between weapon sets; any swaps had to be done manually, so only one could really be used in combat at a given time. No, what the Revenant swaps are secondary skills.

Again, the demo limited me to a single pairing; I could take on the aspect of a legendary dwarven king or a legendary demon, both of whom are familiar to any veterans of the original Guild Wars in terms of lore. Each one has a different set of secondary skills, presumably with several abilities available overall; in practice, it meant that I had a choice of two different secondary sets of skills at any given time. My dwarven skills included lashing a great chain to enemies, laying down stone roads to grant Stability, and setting whirling hammers spinning about wherever I ran. Demon-side, I had access to skills that allowed for transferring conditions back and forth, heals that became more powerful when under the effects of conditions, and so forth.

In theory, this sounds like the class has a dearth of offensive options compared to being able to swap weapons. In practice, however, the setup meant that the class had access to two heals, two Elite skills, and a variety of maneuvers that could be tailored to the situation.

For example, during the big show-stopping Wyvern fight at the end of the PvE demo, I got a lot of mileage out of standing in fire for at least a second to start burning. I could then use my demon skills to hoover up Burning effects, get some notable boons, and then heal for big numbers, followed by a swap to dwarven mode to top off my healing if needed and lay down a stability road just in case a wind burst was incoming.The whole thing is nicely balanced by the class energy mechanic, which will again feel familiar to fans of the original Guild Wars. Several skills cost energy up-front, but several others either add or remove energy regeneration. As a result, tricks like the whirling hammer aura have more strategic deployment. Turn it on, but turn it off before your energy gets too low. It’s basic, but it kept the whole setup from feeling overpowered even with the constant access to two heals and two Elites at a tap.

Weapon-wise, the two-handed hammer was the ranged option, with a ranged attack, a shockwave attack, and the option to throw the hammer to create a knockdown field. Dual-wielding a mace and an axe, meanwhile, was much more focused on getting into melee and applying conditions; combined with several mobility options that allowed for quick and efficient traversal of the battlefield, this setup was a joy in PvP.

I asked about other weapons, but my query about swords was met with a non-answer in the form of vague nodding and “well, Rytlock has a sword.” Draw your own conclusions now that Necromancers can look forward to greatswords. 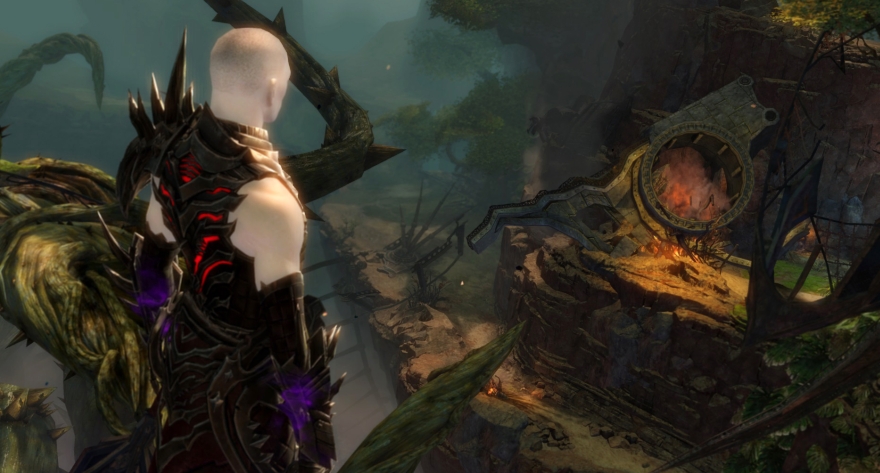 Obviously, what was on display was a small cross-section of what’s going to be in the full game, and as a result it was immediately clear that not every segment of play will see equal use elsewhere. Having the ability to grant stability and swiftness on demand was very useful in exactly the scenarios the demo provided; they could very well be less useful elsewhere. But the most important aspect of the class, I found, was the simple breadth of its toolkit.

Much like the Dervish (or, I’m told, the Ritualist), the Revenant at its core will focus less on managing a field of attacks and more on managing states of being and planning ahead. The first two options in the demo provided a variety of combinations, and while they didn’t make the class more powerful than other options, they did make it feel more flexible. I didn’t wind up dropping once during the big fight at the end, and I held my own in PvP despite the fact that I am a mediocre player at best; the breadth of options available and the responsiveness at play meant that careful attention won the day more often than insurmountably powerful strikes blazing out of the gate.

Originally, I was leery. After playing the class, I’m pretty excited. It’s responsive, it’s fresh, and it brings out a lot of elements that had been sadly absent from the game until now. And it reminds me of my favorite class in the franchise, so that helps. Of course, now I need to figure out how in the world I can fit it into my play rotation, so that’s not altogether a good thing.

Stay tuned for more coverage from the event later today!

Disclosure notice: Travel and lodging for this event were paid for by ArenaNet, as was most of the food. I also hung out with some friends and got a big hug from content marketing manager Rubi Bayer. The in-flight movie on my trip back was Whiplash, and it was kind of bland, but I liked watching J.K. Simmons shouting at people.
Advertisement