Albion Online has released one of those number-cruncher infographic things. Tidbits include the total rabbits killed in the sandbox MMO (656,535), the number of PvP kills (21,636), and the total hours of playtime (267,937). All of the stats were pulled from Albion’s winter alpha.

The devs also revealed that players from 114 different countries took part in the test, with the top five countries from first to fifth being the United States, Germany, Canada, Great Britain, and Russia. 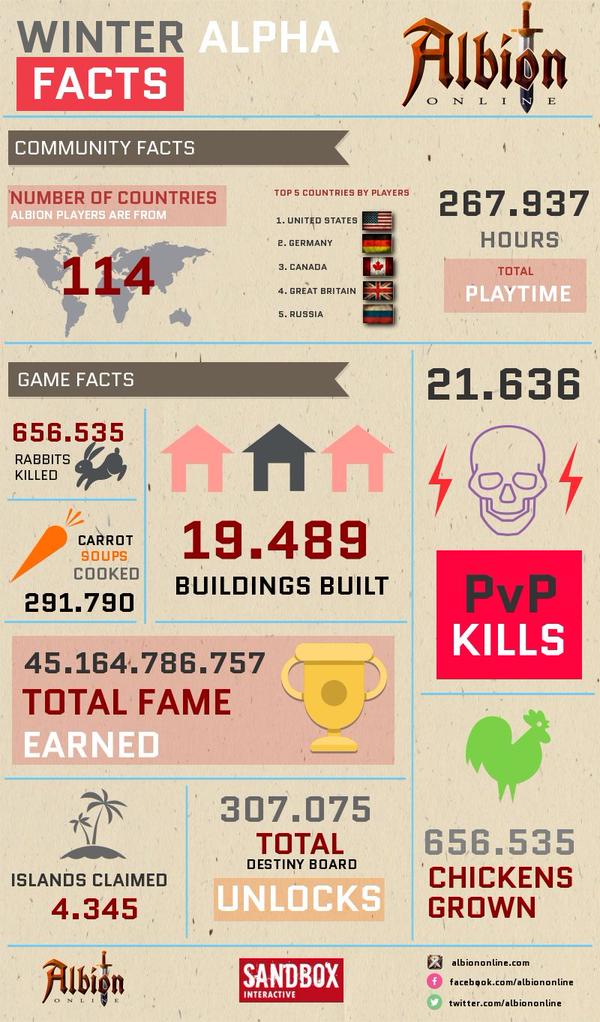 Tierless Lol, I think you should name your toon SirRobin, and I’ll play as your minstrel.

Pashgan Honestly given the early food numbers required to maintain properties I wouldn’t be surprised if they were real.  All Food was 1:1 ratio of nutrition:silver so it didn’t make any difference if you were cooking Chickens, Goats, Pigs or Cows it all worked out the same.  What wasn’t the same was the HUGE cost of items like baby Goats and baby Pigs later on compared to baby chickens which were common and cheap at the end there.

Oh my, poor MJ is going to cry when she sees those rabbit death numbers.  I can’t count how many of those are from her though. :D

rabbits killed = chickens grown? I don’t know the game, but why are these two munbers the exact same?

The rabbits were suicidal. I killed at least 20 trying to chop down a tree but they moved in front of my cursor.

Germany – the home of hardcore PvP!

Pashgan Lol, I don’t think the numbers were made up, I think the designer who made the graphic made a mistake.

Numbers were made up – at least some of them: amount of chickens is equal to amount of rabbits. Unless dead rabbits spawn chickens.