END_OF_DOCUMENT_TOKEN_TO_BE_REPLACED
Update 3.2 for Star Wars: The Old Republic is, in a lot of ways, my update. From the beginning of the game, I wanted to visit the planet Ziost. My favorite Star Wars comic book of all time is the Tales of the Jedi series. The part of the series appears to revolve around Gav and Jori Daragon, but the truth is that Tales of the Jedi is about the old Sith Empire. The wintery world of Ziost was the capital planet of the old Sith Empire. I’ve always wanted to know what happened to that world during the time of The Old Republic, but the writers have been rather silent about it.

As many of you are aware, I’m a big roleplayer in all the MMOs that I play. I like to immerse myself into the world, the lore, and the community of each MMO. That’s probably one of the reasons that I can play only one or two MMOs at the same time. Unfortunately, SWTOR has never been particularly roleplay friendly. It’s always seemed that we roleplayers RP in spite of the mechanics of the game. And now, for the first time in the history of the game, we have been given a tool that is completely designed for roleplayers: the Outfit Designer.

I’m not in the mood to spoil too much for you right now as far as the story is concerned, so I will stay away from talking about Ziost for a bit. But the Outfit Designer deserves some ink, so I’m going to tell you everything you need to know about this new addition to the game. 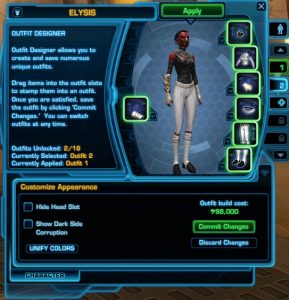 Unlike some other appearance tabs, the Outfit Designer gives you multiple tabs for outfits. The Outfit Designer actually gives you access to up to 16 different outfits, clearly for your night out on the town, the morning after, the walk of shame, the eventual wedding, and everything in between. Each outfit has its own hide-head-slot and show-dark-side-corruption buttons that work independent of each other.

How much does each tab cost? Just like the crack that it will ultimately be for me, the first one is completely free when Update 3.2 goes live. The second, third, fourth, and fifth tabs cost 20,000 credits each. (The Cartel Coin cost hasn’t been implemented yet). The sixth to the 10th tab will cost 40,000 each. The 11th to the 15th will cost you 80,000. And the last tab will cost 200k. All total, it’s only 880k credits. Bear in mind, however, that this is how much it costs per character, and there are other stipulations and costs that I will mention in a bit. But overall, that’s really easy pricing.

I have seen many systems in MMORPGs to make one outfit look like another. Most of the time, it is super simple and not as effective as you’d like it to be, or it tries to be a credit sink and becomes so convoluted that no one wants to mess with it. I think SWTOR‘s “appearance tab” hits a sweet spot.

As I mentioned, each outfit cost in-game credits or Cartel Coins, but it also costs credits to put an item into the Outfit Designer — 14,000 per item, to be exact. Each outfit can have up to seven items, so if you replace every piece in your outfit, it will cost 98,000 credits. As far as prices go, that’s not too bad. I spend that much every time my guild runs into a new hard-mode boss encounter. (Yes, I’m saying we wipe a lot.)

You don’t have to replace every piece of armor. You can, for instance, just replace your chestpiece. It will then pull all other clothing articles from the items you are wearing for stats — par for the course. Also, the item used in the Outfit Designer stays in your inventory so that you can use it in multiple outfits.

One thing that I heard several streamers on the PTS this weekend say about the outfit designer is that the color-match-to-chest was broken. I thought the same thing at first, too. But it’s not. When you’re placing items into the outfit tab, you will not be able to match to chest from there, even though the buttons show up. However, once you’ve committed the outfit, you will be match the color to the chestpiece as normal. You can also unify colors, hide your head slot, and show your dark side corruption without a cost. However, if you replace a clothing item in a tab, it will cost 14,000 credits apiece. 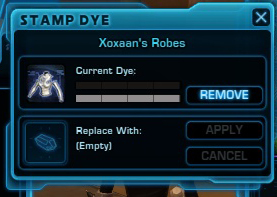 There is another special option for the outfit designer called Stamp Dye. This allows you to use a dye on an outfit item without affecting the base item. Let’s say your chestpiece is black and red normally when you put it on. If you commit that item to an outfit, you can change its dye color with another dye from your inventory. You can now change the dye color for that outfit to black and blue, for instance. This will not affect the base color dye. In fact, if you want your character wear the same outfit in 16 different color patterns with each armor piece being a different color, then you can do that.

I had hoped that the Outfit Designer would allow us to start actually creating our own outfit designs, but this is a wonderful compromise. You can use any gear that you’d like in the outfit designer, assuming that your character could wear it normally. Sorry, Inquisitors; you can still wear only light armor. And it does bind to you when used in the Outfit Designer.

I am already mapping out my characters’ future outfits and making dyes to sell. Let me know your thoughts on this new addition in the comments below.