Slowly but surely, Skyforge has climbed my interest ladder until I was genuinely eager to check it out in its beta state. It’s an interesting position to be in when you are excited about an MMO and yet are not so deeply invested that its potential failing would throw your world into disarray. If anything, I’d love for Skyforge to be a strong sleeper hit simply because we have so little in the way of full-fledge traditional MMOs coming out in 2015.

With a beta key in one hand and an optimistic spirit in the other, I logged onto the second Skyforge closed beta test to see how it looked, how it played, and how it felt. So what’s the verdict? No shortcuts — you’re going to have to come along for the ride!

One of my favorite parts of playing a new MMO is tinkering with the character creation options, but at least for the moment, that was to be denied to me. Instead, I was put into a fully armored (and masked) Templar on a sort of futuristic barge that was coming to dock with a city platform. An NPC acknowledged — with the best mediocre voice acting a budget can reluctantly buy — that I was an immortal. So I’ve got that going for me at least.

I took a few minutes to test-drive my character and get a feel for the controls. It’s a mess of good and bad news, as the graphics look terrific, but the running and jumping animations look and handle a little janky. Apparently Skyforge is also one of those mouselook-only games (similar to Neverwinter), a fact that instantly put me into a claustrophobic panic as I wanted to move my cursor around the screen. Plus, there’s no scroll-to-first-person-view feature, which felt like an additonal kick in the pants. There wasn’t any apparent way to disable mouselook or get a clean, character-free screenshot, so I made my peace with it and moved on.

Naturally, I did try to jump off the barge to my death thousands of feet below, but invisible walls and/or high-tech force fields kept me from doing that. Instead, I used a nifty feature of the game that allows you to target an objective (marked by a diamond) and then hit the spacebar to have my character automatically run there. Well, not directly there; pathing proved an issue. I got a laugh as my character ran back and forth for a bit, then juked down a ramp, then overshot the NPC before turning around to talk to her. A second attempt proved a lot smoother with this system, so maybe I was standing in a bad place the first time.

Dialogue isn’t terribly interactive, with only the occasional spacebar press to move things along. Oh, so apparently I have had past traumatic pain. Time for a tutorial flashback (with, I kid you not, one of those classic “under construction” icons from mid-1990s websites)! 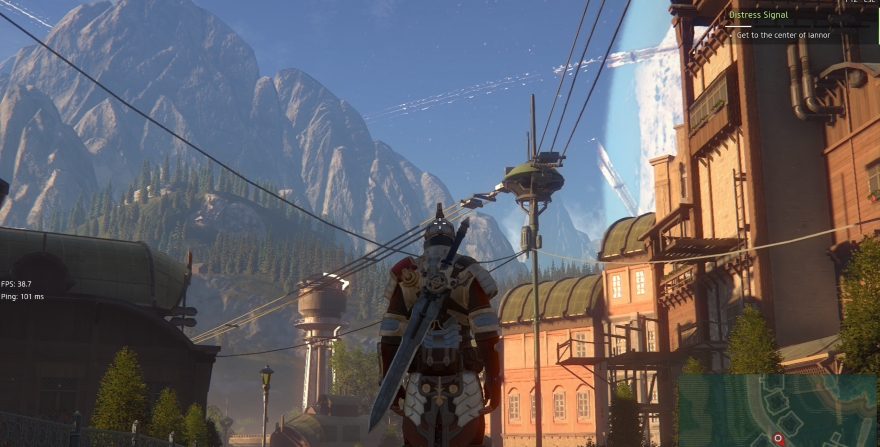 A cutscene and a slow pan over a lovely looking town introduced me to Iannor. Despite its tranquil appearance, Iannor is a hotbed of bad guys whom my squad was tasked with eliminating. Futuristic though my armor was, it definitely had the look of a classic Roman soldier, if Roman soldiers wielded swords encrusted with circuitry.

Finally, a little combat! As I jogged through town, some of the Virds targeted me. My sole option was to left-click for sweeping sword slashes to dispatch my foe. After he dissolved, leaving only the pleasant scent of pine, a Pokémon ball appeared in the air and spat out a few credits. That’s really the only way I can describe it.

It’s as straightforward as you can ask for, culminating in a fight with a giant rat-soldier. This was actually a little tough, since his power attack took a massive chunk out of my health. I guess it’s a good time to learn to move before being hit, eh?

I want to say a quick word about the physics in Skyforge. For the most part, the physics system is quite welcome and well-deployed, especially in combat and cutscenes. However, the team got overzealous in applying the tech to breasts because they (the breasts, not the team) bounce and jiggle like bags of jello with springs inside. “Distracting” is putting it lightly.

So long tutorial short, I got killed, then was reborn as an immortal, and then used my newfound room-clearing powers to take revenge on the totally gnarly Reaper of Death. I promise you that’s his name. He’s as dorky and non-threatening as you might imagine. 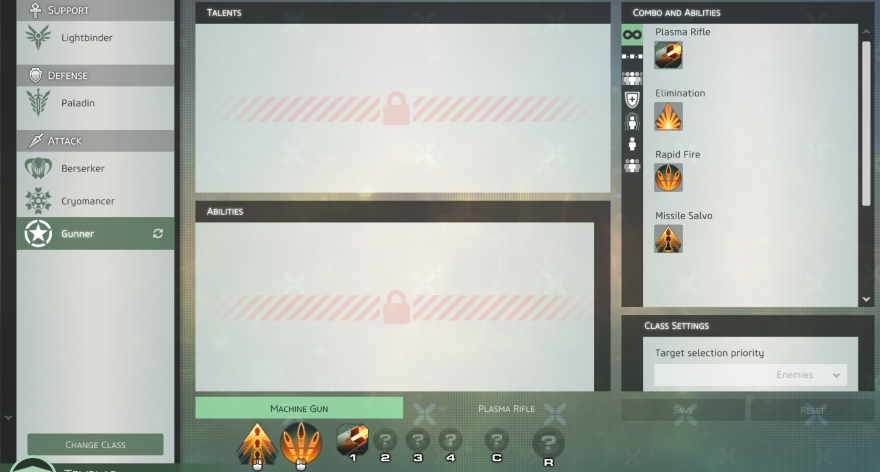 With that flashback out of the way, we finally got down to making my character in a Mass Effect-looking virtual room. A hologram named Flavius guided me through picking a class. There are currently five available in the beta (two of which are limited by which founder’s pack you bought), and all of them can be swapped on the fly. I chose Gunner because that big cannon will compensate for my noobness.

After this came — oh joy! — customizing my looks. There’s actually a lot to consider here, from clothes to to makeup to voice to running animations. I suspect that there will be a subset of players who will get eternally trapped on this screen when they realize they can increase bust size to “Playboy” and have their character endlessly run toward them while the physics engine goes hogwild.

Then the game turned me loose to test out my newfound class abilities on a whole bunch of different drones. I deeply appreciated this; I always want MMOs to let me have some breathing room toward the beginning to get my game legs. This was perfect, and the Gunner impressed me with the powerful animations and variety of attacks. Unleashing a missile swarm at a foe quickly became my favorite move.

With the tutorial and character creation (in that order) out of the way, it was time to head out into the larger world and seize my destiny. But for that, you’ll have to wait for part two of this impressions report!