I’d like to play devil’s advocate about this whole ArcheAge dolphingate thing. First, though, let me start with a disclaimer. If you’ve read this column for any length of time, either here in our new home or over the years on Massively-that-was, you know that I don’t pull any punches when it comes to Trion’s ArcheAge buffoonery.

But this was not that.

Was this a big deal?

And as I’ve mentioned previously, the only reason I returned from my initial rage-quit in the first place was because the rest of the MMO industry has its head firmly up the arse of too-busy types who can’t deal with virtual worlds, non-combat gameplay, and ambitious feature sets. ArcheAge delivers those goods, but it delivers them in the smarmiest way possible thanks to Trion’s gamble boxes and XL’s RNG-flavored idiocy. As such, I’m basically biding time on my boats and my farm until a triple-AAA sandbox happens by that’s less concerned with monetization and exploitation and more concerned with sandbox gameplay.

So the fact that a bunch of game-hoppers received a bunch of cash shop potions and a pink dolphin didn’t rustle my jimmies in the slightest. I’ll still be over here in my own little corner of ArcheAge’s megahuge world doing some tractor racing, some roleplaying, etc.

But boy, am I in the minority!

ArcheAge patrons raised such a stink on the official forums and on Reddit that producer Merv Lee Kwai felt compelled to offer an apology post, and later, restitution. In the end, I got a dolphin mount for nothing and a bunch of free gold thanks to the selling price of the trinkets that Trion doled out to pissed off patrons. This, of course, will only drive the game’s runaway inflation to ever more ridiculous heights, but hey, why start caring now?

Let’s be clear about this, too, in case my intro didn’t get the job done. Trion has in fact made an unacceptably large number of mistakes in its handling of ArcheAge. From the alpha-to-launch gameplay switcheroos to the Auroria launch debacle to letting exploits (and exploiters) linger, the firm has more than earned the voracious criticism directed its way in recent months.

Except for the criticism surrounding dolphingate.

Because, see, that wasn’t criticism. It was pure jealousy of the sort that causes people in every hobby, profession, and walk of life to look at their neighbor and think “how dare he have something that I don’t have.” 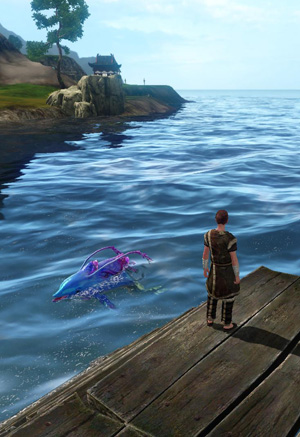 Every MMO company in the history of ever has bribed game-hoppers to return with the promise of shiny virtual junk. That so many players got so upset about Trion following suit via some item mall accoutrements and a dolphin mount is indicative of how many players are simply doing ArcheAge — and MMOs in general — wrong.

It’s not about the fun of playing in a virtual world to all of these complainers; it’s about being better than the next guy when it comes to artificially scarce virtual crap or meaningless PvP or similarly meaningless raid world firsts.

And it makes me incredibly sad to see ArcheAge’s mechanics wasted on such a silly, petty group of gamers.

Seriously, guys, who cares if your neighbor got a dolphin mount for coming back to the game? I mean, really, does that cause you to have less fun with the game mechanics? If you answered yes, then you weren’t having fun to begin with, and you should just take a cue from your neighbor and quit. It’s a pink mount, for funk’s sake!

Similarly, who cares if returning players got all the sunpoints and starpoints and whatever? The only possible downside is the effect on what passes for ArcheAge’s economy. “What passes for” is the key phrase, by the way. ArcheAge’s economy was a bad joke from the moment that Trion (or was it XL?) decided to put gameplay-affecting items in the cash shop. This isn’t a new thing; it’s been going on since launch, and ArcheAge clearly favors spending over playing. This makes in-game economics completely pointless, so let’s stop pretending that anyone would have gained (or lost) an advantage over dolphingate as it was originally presented.

For the fun of it

Ultimately I just don’t understand people who base their happiness on comparisons with others. In this particular case, bawling patrons got their dolphins and their cash shop gunk, presumably because Trion felt it had to do something for the people after six months of clownshoes mismanagement. The episode was pretty revolting all the way around, though, particularly the waves of entitlement wafting off the patrons who acted as if their 15 bucks (if they’re even paying that) wasn’t already compensated by terms that they themselves agreed to.

I hate to defend Trion even a little bit because the studio is largely responsible for turning the most promising virtual world of the past decade into a casino and a playground for wallet-wielding detestables who can’t admit that they’ve outgrown MMOs. But dolphingate shouldn’t be on the company’s comically long list of failures.

It was a player failure, and all the outrage from one group of people regarding pixel rewards for another group just shows how many shallow busybodies are goofing at MMOs these days.

Jef Reahard has been playing ArcheAge since the 2011 Korean CBT and writing Massively’s Lost Continent column since 2013. It chronicles one man’s journey through XLGAMES’ fantasy sandpark while examining PvE, PvP, roleplay, and beyond.
Advertisement