It’s 1989. My buddy and I are in a comic store and raising our eyebrows at this odd little one-shot called Gotham by Gaslight. You probably know it; the cover is all greens and blues with a gargoylish and scarier-than-usual Batman perched on a 19th century rooftop.

We didn’t realize it at the time, but we were looking at the first in a series of Elseworlds entries that transported familiar heroes and villains into exceedingly unfamiliar locales and circumstances. Fast forward to 2006, when DC’s Infinite Crisis arc officially dubbed this weird steampunkish world “Earth-19.” Fast forward some more to 2015, where three of the 41 champions in Turbine’s new Infinite Crisis MOBA hail from this alternate earth.

Let me state up front that prior to the past two weeks and 10 protector levels of Infinite Crisis, I hadn’t the first clue about MOBAs. Why would I, really, since I’m typically a sandbox MMO economy nerd and typically not a fan of PvP? If any character could help me overcome my longstanding MOBAphobia, though, it would be Batman, in particular the Victorian gun-toting Gaslight Batman who serves as your tutorial champion in Turbine’s latest effort and who tickled my newfound steampunk fancy so many years ago.

Infinite Crisis follows the basic gameplay formula well-established by League of Legends and Dota 2. Most matches feature two teams of five players, with each side tasked with protecting its power core and traversing both lanes and the (urban) jungle to reach the enemy’s core and destroy it. Actually, let me back up. I’ve been playing IC’s Coast City map almost exclusively, which is a two-lane setup as described above.

The devs do occasionally enable other game types including Gotham Heights, another two-lane setup that involves control point management, and Gotham Divided, which is a three-lane map. There’s even a 1v1 map called Crime Alley, but for the past several weeks Turbine has funneled its entire solo population into Coast City, I’m guessing to reduce queue times. If you’re lucky enough to be playing IC with a large group or guild, you can queue together for the publicly disabled maps, but as of today you can’t queue for them on your own.

Got all that? Good. As I was saying, IC takes the standard MOBA formula and tweaks it a bit. Coast City, for example, features a couple of power relays in the jungle and one above the top lane. These things open for business periodically and add a bit of strategy/chaos to the standard lane-pushing game by providing elite drone bonuses to the side that controls the most relays. Oh, if you’re a MOBA newb as I am, know that drones are effectively NPC henchmen that march through the lanes toward the enemy power core, attacking anything unfriendly in their path be they opposing player champions or NPC defense turrets that can ruin your whole day if you’re not careful. Alternatively, they can save your ass if you manage to get back to one after over-extending behind enemy lines.

The Doomsday Device is another Coast City wrinkle. If you and your teammates manage to down a center-of-the-map raid boss before the opposing team, you get a free nuke that you can chuck in the direction of an enemy turret for what amounts to an insta-kill.

All 10 player champions start a match at level 1, and killing enemy drones, players, turrets, and neutral jungle NPCs provides gold, which is used to grow a character over the course of a match. Gaslight Batman is a marksman, which means that I typically stay at max range and snipe enemy players and drones, with the goal being to last-hit them and thereby maximize both gold drops and e-peen.

And yes, “last-hit” is exactly what it sounds like: getting the last hit that finishes an enemy. Gaslight Batman features a powerful auto-attack called echoes as well as three active attacks and an “ultimate,” all of which are housed in an MMO-style hotbar and leveled up over the course of a match. 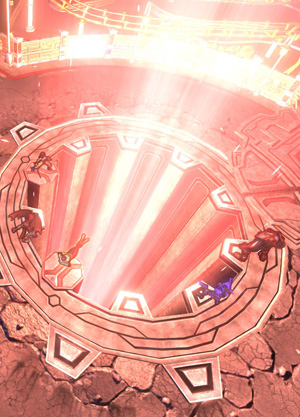 The character progression process can be a little confusing at first, due mainly to IC’s busy itemization interface and the sheer number of choices at your disposal. Do I take Joe Chill’s Revolver or an Atomic Axe? And should I stick with the default stolen powers, or do I want a heal and maybe some temporary invulnerability? These are all questions you’ll be asking yourself, and there’s not a lot of time to waste on deciding in the heat of a match.

I tend to focus on purchasing (and later upgrading) items that buff my attack damage first and attack speed second, but part of IC’s charm is the way that it requires you to progress your champion dynamically in response to both the makeup of the opposing team and how said team is building its champions. Theoretically no two matches will be the same, but there are of course best practices for playing each champion as well as determining what role your champion will fill on your current team.

In addition to marksmen (ranged damage), there are bruisers (melee damage), enforcers (tanks), assassins (stealthy melee damage), controllers (CC and support), and blasters (burst damage), all of whom are represented by a dizzying array of DC universe heroes and villains.

Fortunately there are a lot of good guides out there for scrubs like yours truly, and so far I’ve found IC’s community to be far less toxic than I’d imagined. Yeah, I got yelled at a couple of times during my earliest matches, but more often than not, typing, “I’m a newb” in the pre-match chat box will earn you some slack and usually some advice. 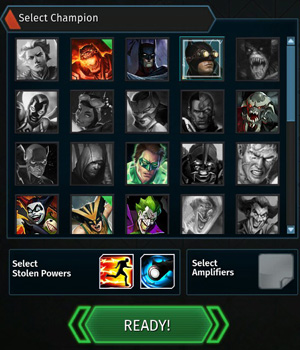 In-match progression isn’t the only progression, though. Each time that you play a match, you’ll earn protector XP, where “protector” is Turbine’s attempt at lore, at explaining how mortals like the players are aiding superheroes as they battle across time, space, and the multiverse. In gameplay terms, it’s your account level, and ranking up earns you everything from cash shop currency to avatars and the like. And of course you can level up every individual champion for similar rewards.

IC’s business model is the usual free-to-play with a selection of basic champions plus a rotating assortment of paid heroes that routinely become available for you to try on a weekly basis. Turbine is presumably making its money on the cash shop currency needed to unlock both additional champions and spiffy costumes.

And that’s Infinite Crisis in a nutshell. A commenter in one of my recent IC-flavored Daily Grinds cautioned me that Turbine’s MOBA is a gateway drug to the real thing, given its relative accessibility compared to kingpins like Dota 2 and League. Though I’m still a neophyte, I already see the truth in his statement, as I find myself thinking about IC when I can’t play it and trying my damndest to log at least two matches every day. Not only that, but my ever-wandering game eye is already casting furtive glances at more established MOBAs and making me wonder whether or not I’d enjoy them without one of my favorite IPs sweetening the pot.

If the rest of the MOBA genre is basically Infinite Crisis only better (or at least, more complex), then my free time is in big trouble! The laser-focused format is incredibly appealing to someone who’s still competitive but who is also too old for twitchy shooters and too bored with ill-conceived MMO gankbox PvP.