Since the last edition of WoW Factor, two big things hit World of Warcraft in quick succession. The first is that the much-discussed WoW Token finally went live, meaning that anyone who wants to buy gold legitimately or buy subscription time for gold has an option to do so. The second is that patch 6.2 hit the test server, and unlike the rather anemic patch 6.1, it promises to have a bunch of stuff for players to digest and enjoy.

It doesn’t have flying, but then, we just had that discussion.

There’s a lot to unpack here, so it’s best to start from the oldest point and work our way forward, and that means the token. On the one hand, tokens represent a big shift away from how the game has always operated, but at the same time it’s also a fairly minor shift in the grand scheme of things. And if you had the gold to afford one, you’re even helping the game’s somewhat stymied economy. 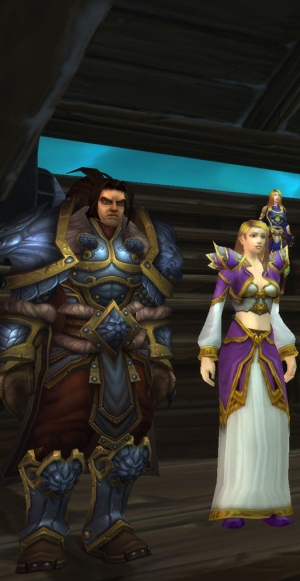 Before the tokens launched, I saw a lot of folks arguing that the default price for the token was far too low because 30,000 gold was hardly a drop in the bucket. Apparently, the market feels otherwise; at the time of this writing the tokens are down to a bit less than 23,000 gold, and even with peaks and valleys the tokens have been going briskly.

The reason that the tokens seemed cheap, of course, is that for a lot of players gold is a limiting factor only in the broadest sense. For a long time now, if you’re a veteran player, you’ve had virtually nothing to spend it on. There’s little reason to buy things at the auction house and not much that’s going to make a dent in your bankroll other than mount collecting, and if you play on a daily basis, you’re almost certainly accumulating that money faster than you’re spending it.

Short of a crafting overhaul and some massive changes to the game, there would never be a way to make gold sinks that could keep up with that level of player wealth other than funneling it straight to other players.

The bright side of having the token in the game is that it’s a net benefit for players who haven’t been playing as long as well as for the veterans; that gold that was just sitting in place becomes useful, while newer players aren’t left with an enormous money sink that they cannot pay through. The game’s economy has stagnated for a long while partly because this expansion made crafting almost irrelevant for anyone other than your character. This at least gets money moving through the game again, even if it might not be the best possible means to do so.

And for those of you who now get to play the game as more or less a buy-to-play title, of course it works out fairly well for you.

Supply is always going to be high, since for many players $20 is a pretty reasonable price for what they can’t earn otherwise. I do wonder about the long-term impact it’s going to have, since many players have likely made their extended subscriptions almost irrelevant. It’s a cash infusion now, but it shuts down some future revenue, which makes me wonder what the net impact will look like for Blizzard in a few months.

Still, it’s an evolution, and that’s a good thing. How well it works out over the game’s lifespan remains to be seen, but it’s going to add an interesting dimension going forward and keep gold a bit more relevant.

Mythic dungeons, timewalking, and other excitements that aren’t

As soon as I read about Mythic difficulty for dungeons, I found myself thinking that I should be excited about this. This is something that I’ve wanted for a long while, and now it’s here. Why don’t I want this? Why am I not shouting from the rooftops about how great this is? Why do timewalking dungeons not make me super psyched?

That question is probably the easiest to answer, on the surface: because the dungeons are available only during certain weekends, not simply a new aspect of the gameplay. It’s too limited to be considered as a new element or something that’s going to stick with the game in the future. And much like far too many aspects of this expansion, it feels as if the game is looking into the past because the present is far less interesting.

And then I remember that every timewalking dungeon is going to be an exercise in hoping that something relevant drops all over again, and I start to get a sense for why this might not be something I find exciting.

Categorically, the idea of Mythic dungeons is something I like quite a bit. But in practice, I would be surprised if the dungeons didn’t require a Gold medal in the Proving Grounds to access the queue, and that’s an aspect of the game that’s problematic at best. It’s a spectacular idea, a good way of trying to make sure that players going into high-end dungeons can actually do the content, but in practice it comes out to a gating mechanism that requires a specific skillset that may or may not be relevant and a particular set of tools. It locks people out of content.

That’s ignoring the fact that the gear requirements for it are likely going to require either extensive clearing of Heroic dungeons (something that players have not had much motivation to do for some time) or a hefty dose of LFR at the very least, which undercuts the entire idea that players want this as a progression path. It’s a solution to the problem that neglects the solution that already was in place and working back at the end of Wrath of the Lich King.

Lest all of this seem like grousing – which, to be fair, it is – I am excited about both of these ideas. I like the idea of going back and taking on some old dungeons with our current skillsets, especially some of the most classic and fun dungeon from back in the day. The fact that the rewards will scale back up to any extent is fun, too; it’s not really something that I feel the need for, since hunting for transmog pieces can be done more efficiently, but it’s a nice touch to make the content seem relevant again. And while the designers would be far better served by providing new five-person dungeons, upgrading the ones that are there in challenge and loot is a step toward recognizing this as a valid form of content.

But it still feels like the sort of content that would be better off with the systems that we had in place a long while ago. It’s a positive development hampered by coming out at a time when it can’t be fully appreciated or work to its full potential. And I suppose I’ve been bitten a touch too regularly over the past few expansions to fully give in to hope.

At the same time, a number of signs point to this as being the last major patch for this particular expansion. We’re up to the limit of the expected raid tiers for the expansion, the last stage of the Legendary ring is supposedly here, and there’s a general sense of finality. That makes some of these elements, like timewalking and Mythic dungeons, feel more like testbeds for the next stage — like preparation for the next round, the next expansion, the next batch of ideas. I won’t be sad to leave Draenor behind if that’s the case, but if some good can come out of it in the long run, so much the better.

As always, leave feedback down below or send it along to eliot@massivelyop.com; I read all of it, even if I don’t respond to every piece. Next time around, let’s talk about that growing level cap and whether new expansions can provide growth without the upward climb.