The PvP team at ArenaNet is steadily gearing up for the release of the Heart of Thorns expansion, with the PvP-inclined among the Guild Wars 2 playerbase being treated to a 24-hour open beta Stronghold event last week. I don’t know about you lot, but I found the Stronghold open beta experience to be very interesting and perhaps even game-changing for me. I was invited along by the team to join forces with other journalists and ANet staff, including Game Director Colin Johanson, in an epic battle across the Champion’s Dusk map during the day-long playtesting period.

My name is Tina and I am PvP-phobic. I have an embarrassingly poor track record in PvP, opting instead to sink my time into PvE adventures rather than bashing my toon against the might of other players. PvP usually switches me right off, presenting a very steep learning curve that’s quite unforgiving for a curious explorer like me. But I put my dread aside and threw myself headlong into the perilous fray of Stronghold this week in order to sum up the experience for an edition of Flameseeker Chronicles… and was pleasantly surprised!

Frustration usually follows the PvP newbie around like a bad smell, and as a PvP-phobe I consistently find myself at an inherent disadvantage when occasionally queueing with friends to check off a few extra dailies. I don’t usually enjoy other types of player-killing games either, so MOBAs and shooters don’t get much airtime on my PC. As much as I appreciate the real-time strategic calculations and min/maxing veteran PvPers are expert at, I often feel overwhelmed when attempting to break into their world. Having now played Stronghold, though, I’m confident that it will take all my PvP hangups, smash them up, and make me dance on the broken pieces. 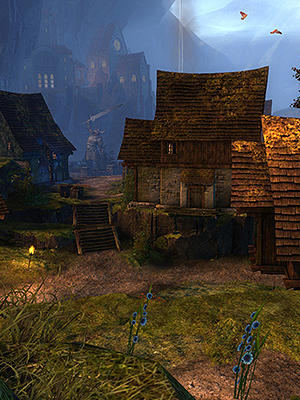 I’ll start by talking about objectives and what makes the Stronghold PvP mode different from Conquest. In Stronghold, each team attempts to break through enemy lines by smashing through the enemy gates. Once that has been done, the enemy lord must be defeated to end the battle, but that lord will most definitely be surrounded by plenty of protection goons. We’ve seen this sort of format before in Conquest within the Legacy of the Foefire map, but I assure you that the mechanics are quite different. In Stronghold, players are presented with several MOBA-style strategic factors that require consideration straight from the off, transforming the experience from a skill-focused battle between well-honed player-killing machines into a collaborative PvP experience with the sort of planning a good dungeon boss kill might require.

Supplies lie in the centre of the battlefield, and each team must collect these supplies and bring them back to its barracks in order to employ the use of Stronghold’s NPCs. In Battle of Champion’s Dusk, these NPCs take three forms: the Skritt doorbreakers are crafty wee weaklings that pack a punch to the super-strong enemy base doors but die in one hit, while the archers aren’t much use against the doors but deal high damage to the enemy NPCs. How to gather these supplies and on which NPC type to spend them is at the discretion of the team, and this plan must be balanced against the enemy assault of your own barracks. The third form, heroes for hire, are summoned by mist essence that appears every three minutes. The heroes give a solid defensive bonus that allows the players to make a more effective offensive push and also pops a powerful AoE attack if you can manage to march that hero to the enemy lord. 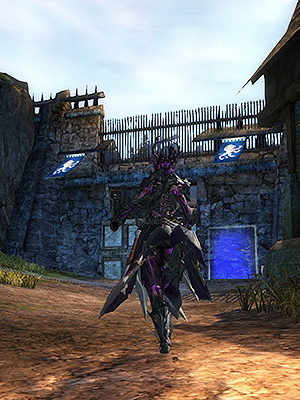 The Stronghold beta made me feel useful in PvP for the first time ever, and I really enjoyed that. Each player spawns with one supply to spend immediately and can carry two supply units at a time. I found that I was a useful supply carrier as my chosen Necromancer glass cannon build suited the task; I could quite effectively deal with enemy supply runners and grab those goodies for myself. Since you can gain supplies from downed players who were carrying them, I found that popping off the enemy runner after gathering one supply for myself worked out very nicely. Sending a wave of archers out to help my team first also helped, as they needed to tie up the opposing NPCs quickly so they could get to work downing players. My team were fantastic at keeping me in the loop on Skype, so I was able to switch into sending up doorbreakers as soon as they were required and the lane was clear for them.

We opted to leave the hero summoning until we had cleared a relatively safe path, but we still had to be aware of the chance that the enemy would push for heroes before us. Since I was close to the barracks for my early supply running anyway, I was able to look out for any enemy push on our barracks and call my team back when needed. Our strategy adapted to the enemy’s as it needed to, but no matter what task we were doing, I felt supported and useful. The number of points that could be accrued outside of standard PvP combat was also significant, and this definitely helped me feel more useful to my team. There are 20 points up for grabs for summoning a hero, 50 for destroying a gate, and 10 points for each guard that was killed. My role turned out to be just as important as the role of the seasoned PvPers in my team who were more comfortable standing toe to toe with whatever the map and opposing team could throw at them. 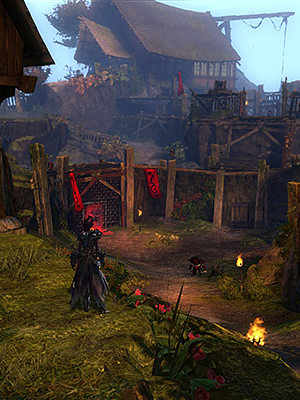 At one point, while waiting for my team to pull back to prevent a larger assault on our barracks, I hopped on the trebuchet to lob heavy things at the assaulters and support my team trickling down the map. With my PvP skill being what it is, I never could have been effective in holding them off without that clever map-provided tool to aid me. True, I ended up being swiftly chased out of that trebuchet and killed, but those antics bought my team some valuable time. Damnit, I even had fun dying too, which was an entirely new PvP experience for me. Some games make me swear while playing more than others (just the sight of a Mario game and the air turns blue in my house), and PvP usually triggers a torrent of verbal diarrhoea. But rather than effing and blinding about how stupid I was, I actually laughed – laughed! – at my demise. I really enjoyed hearing, “good job, Tina!” and similar phrases coming from my teammates instead of the usual, “oh Tina, what are you even trying to do?” and really hope other players take on this positive attitude when Stronghold goes live. My team won two of its three bouts, and I performed admirably for a wee lass who doesn’t play much PvP. Joint-second in the last match, if you please!

Knowing that the open beta for Stronghold was only a day long, I am aware that some of you might have had to give it a miss due to other commitments. I hope my overview of my play experience has helped fill you in! If the Stronghold open beta is any indication of the gameplay we can expect at launch, I might actually start enjoying PvP in Heart of Thorns. If Stronghold can make even this PvP newbie feel that she can make a credible contribution to her team’s efforts, it may very well make a PvP convert of me. Now that I have an easy in and a way to make myself useful while I learn the tricks of PvP, I might even accidentally become better at smashing other players’ heads in. I could even earn myself a pretty llama…