END_OF_DOCUMENT_TOKEN_TO_BE_REPLACED
Are you tempted by TERA’s new Gunner? I am. Admittedly it’s been a long while since I’ve frolicked in the land of Arborea, but my interest is piqued. Basically, I’d never really felt a great affinity for my Priest no matter how much I wanted to like her, so an intriguing new class might be just what the healer ordered to increase my playtime. Come next week, everyone can jump in and experience the firepower of this brand-new class. But as we all know, waiting is hard! That’s why when the opportunity arose to give the Gunner a whirl alongside En Masse Producer Patrick “Treeshark” Sun, I shimmied into some chaps, donned a 10-gallon hat, and charged in with my best Dirty Harry voice.

My bad impersonation notwithstanding, the experience offered a pretty good taste of this new gun-toting death machine. It delved much deeper than showcases that restrict you to a visual tour of devs playing a new class, and it even went beyond a quick, time-limited hands-on. I got to play the class on both ends of the leveling spectrum and at my own pace. Not only did I get to hunt BAMs with a max-level Gunner, but I got to go back and experience the first few levels of life as well.

And now I get to share those impressions with you. But before we get into that, I am going to tell you how to get a new mechanical mount for free to celebrate the release of the Gunner! 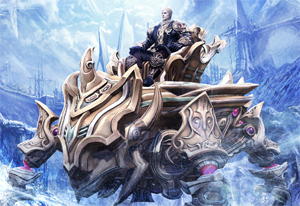 Not much gets ganers’ attention like “free stuff,” does it? It’s even better when there aren’t a bunch of hoops to jump through or hurdles to clear in order to acquire said free stuff. And thankfully, the only action required of players to acquire this bundle of joy is to log in. As our group saddled up and tested out the new mechanized spider look-alike, the EX TRM, Sun casually revealed that this particular mount (seen on the right) will be free to all players for a limited time starting May 5th. You don’t need any particular reason to nab this deal; just be sure to do it within the two-week time frame — otherwise your only recourse is to buy it in the shop.

TERA players do not need to be told what a BAM is. Following that train of thought, you can pretty well surmise what a BAG is here — just think of the class’ armament of choice. And that’s really not an exaggeration in the slightest. Don’t shoot me, but my very first impression of the class was all about the weapon: That’s one giant, gaudy gun! Seriously, it had wings, it glowed, and it was the size of my character. I started on a level 65, and I sported a top-notch weapon that had the best bells and whistles. I know there are folks who really like the big, bright, and flashy style of weaponry. I am just not one of them. It could be my affinity for old westerns, but I was actually hopeful that there were other styles of guns beyond the massive cannon. Sun, however, said that the only difference is in the skin, not the size. There’s a wide variety, though, from crossbow look-alikes to anime. At least Gunners just starting out get a very simple-looking weapon instead of a really bright and flashy one, but it’s still so big that you can’t see your avatar from behind! And it actually gets bigger when you wield it.

Some folks might be more miffed that the class is relegated to only two races (Castanic and High Elf), and only the females at that. I have no problem with women handling heavy machinery, but these are cannon best fit for a warship, not a bipedal being! It’s safe to say that the model of the weapon is actually a big — pun not really intended — drawback to the class for me; it seriously detracts from the experience. So much for that first impression. Of course, I can’t judge the class on the look of the weapon alone, so aesthetics aside, how does it play? This is where the class gets good!

Once I pushed the look of the weapon aside, I aimed at getting a feel for using it. And that was quite a bit of fun. Unlike TERA’s other classes, the Gunner is extremely mobile. As Sun put it, “You can actually run and gun at the same time.” It could be all the time I have spent in The Secret World or even my foray into GTA Online, but I really appreciated being able to move out of the way of oncoming attacks without sacrificing my own. It made the whole battle more fluid and kept me engaged. It also gave me the feeling of being on the offensive more, an important frame of mind considering I was a damage-dealer! Add to that the ability to wear heavy armor while dishing out DPS and I was definitely bolder; I could take enough hits that I would venture closer and unleash on the mobs. And for those times I got a little too close, the cute little HB construct companion allowed me to recall over to him for a quick getaway. That recall ability works even if you are knocked down, a boon if a BAM has you down and is stomping you to death! (The rocket jump skill will also get you away quickly — but only if you are on your feet.) 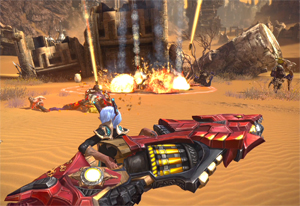 I liked how movement was more than just a bi-product; it’s built into the class. The Gunner isn’t meant to be a stationary sniper lobbing out occasional volleys. One of the key moves you start off with is called rolling reload, which is not just a way to dodge danger; it also conveniently eliminates scattershot’s cooldown and even starts a combo for more firepower. The fact that it’s fun to do and looks smooth isn’t lost on me, either: I was rolling all over the battlefield!

Additionally, Gunners are more effective when they are constantly engaged. After level 10, this class gets a new pool to draw on called willpower. This willpower pool, however, starts off empty and is filled only as you kill mobs. On top of that, willpower dissipates fairly quickly, so more must constantly be gathered. Why would a Gunner want to max out his or her willpower? Because when you do, your weapon glows and you get access to massive special attacks. My personal favorite was burst fire, which just kept shooting like a machine gun until I stopped or my entire willpower resource was used up. That means trash mobs are a Gunner’s best friend! There is a skill called replenish to help nudge your willpower (and MP) up a bit without killing mobs, and starting at level 25 players can modify skills with glyphs to enhance the generation of willpower, but you basically have to keep on killing to truly utilize your class.

Happy trails to me

In all, it was hard to not feel a crazed glee as I sprayed everything around me with bullets, bombs, and turrets. I am not usually a fan of DPS classes, but I think the Gunner may actually convert me. Even though the beginner Gunner doesn’t have as many skills, it was still plenty fun. Besides, I knew what was waiting for me at the higher levels. When May 5th rolls around, you might just find me logging into TERA via Steam, claiming my machine mount, and pulling the trigger on my very own little Gunner. If I somehow get tired of shooting things up, I can also enjoy the Anniversary events that start the same day!