Long ago on Massively-that-was, a reader named Avaera sent in a long list of fabulous questions worth addressing. I’m tackling another in today’s edition of Ask Mo:

Would you welcome a large scale roleplaying-enforced MMORPG? One where you simply have to interact with other players in-character? One of the things that I miss most from the transition from playing MUDs to playing MMOs is the lack of memorable characters who chose to take on unique roles in our virtual societies. Most big-budget MMORPGs have great tools for player communication and cooperation, but the “role” part of RPG usually equates to the job or skills that you as the player will bring to a combat encounter. I’d love to see what a game is like in which you have to play as your character in all aspects. Just to be clear, I don’t mean using “thees” and “thous” or sitting in a pub and emoting but rather gradually crafting a virtual persona through your gameplay decisions and interactions with other characters (both enemy and ally alike). Is there a big-budget MMORPG out there already that has been designed from the ground up for mandatory in-character play, and I’ve just never heard of it?

I can think of only one, and that’s a damn shame. And it’s not even out yet.

To find the very best multiplayer roleplaying games, you’d probably have to wander back to MUDs and graphical MUDs and proto MMOs, and while you’re wandering, you’ll be mocked the whole way by fellow gamers because haha roleplaying is for dorks, duh. And that’s absurd, right? How did it come to this? How did a genre inspired by pen-and-paper RPGs come to not just omit the idea of roleplaying but actively spit on it?

Roleplay servers — official ones, mind you — were once quite common. I spent some time on an alt roleplay server in Dark Age of Camelot, but not with my guild. My guild, then already several years old, was a roleplaying guild for all intents and purposes, the sort that actually held roleplayed recruiting ceremonies and storytelling events and tied everything together with fan fic. But even so, my RP guild went to a non-RP server. Why? Too many members were intimidated by the idea of DAOC’s roleplay servers, which at least at the time demanded that players make a passing attempt at staying in-character, in-world. No thees or thous were required, but get reported once too often for talking about football and you’d be squelched or — I assume, anyway — booted entirely.

Can you imagine a AAA studio hosting a server like that in 2015? Can you imagine a modern studio paying GMs to monitor open chat for roleplay griefers in an age when they can/will barely stop stalkers and racists and exploiters? Not gonna happen. Not anymore.

Modern roleplay servers — when they exist at all — are never RP-enforced or RP-encouraged. At best, they’re code for “mature” gamers. Jocks and script kiddies usually know to stay away, and more serious players learn to congregate there; even if they have no specific interest in roleplaying, they’d rather be around roleplayers than be stuck with the average mouthy gamer trashing-talking in /general. 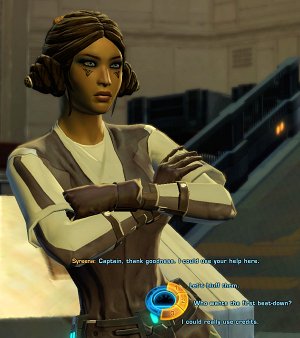 In our current environment, where MMORPGs have become diluted and their greater audience is even less interested in multiplayer roleplay than it was 10 or 15 years ago, it makes a depressing sort of sense that studios are ignoring not only player-driven roleplay but mechanics for built-in, character-driven roleplay as Avaera describes as well. The closest we’re likely to ever get is skill-by-use, aging mechanics, reputation systems, and SWTOR-esque alignments-via-quest-choices, and they’re likely to be systems tacked on to a game with more mass appeal, not placed at the core of an MMO. That’s especially true as developers churn out cheap and disposable themeparks that include few roles beyond Psychopathic Adventurer in them to begin with. Almost no one is making virtual worlds where playing anything but that would make sense in the first place. You don’t have to work hard to roleplay at being a blacksmith or a bard in a real virtual world; you just are one.

But I’m not sure we can blame game developers alone for giving roleplaying the shaft. I used to roleplay heavily and took my in-character roles seriously, more seriously than I took the rest of each MMO I played for sure. I dedicated buckets of time to backstories and cultivating character relationships and plots. I spent way too many hours writing stories to fill in the gaps between in-game scenes, and I stayed up far too many nights in a cantina playing out dramatic episodes that just evolved organically. It was the sort of activity I felt I could do only if I did it really well and obsessively.

And it took a lot of time. Way too much time.

MMO players trend slightly older than the typical gamer stereotype; Massively OP’s own demographic stats reinforce that broadly known metric. The bulk of modern MMO players are in very different life stages than they were in the early days of EverQuest or even World of Warcraft. Most of you are not 16-year-old kids. Some of you have 16-year-old kids, though. Just like raiding and grinding and leveling tracks that took months, roleplaying has lost even more ground with MMORPG players because it sucks up time the genre’s core audience has in ever smaller quantities.

That’s not criticism; it’s reality. And it’s at least part of why we’ve seen the genre shift with us as we grow up: Devs are trying to pander to those of us who are short on time but rich in disposable income while they simultaneously cater to the youngins who grew up plugged into a tablet and are just now laying their hands on their first MMOs. Neither group will put up with retro timesinks, and that’s what roleplaying has become. The way the modern gamer thinks, if the devs aren’t going to reward them for roleplaying, they’re sure as hell not going to bother with it. And devs see that no one is bothering with it, so they don’t support or reward it, and the cycle continues on and on.

The frustrating bit is that while raiding and grinding and leveling tracks — and even time-consuming PvP sieges and crafting characters — are all making comebacks in their own way, roleplaying really isn’t. We’ve never given devs a reason to beg us to stay, to focus on us as a constituency they must even acknowledge, let alone pamper. Studios can always count on roleplayers to show up and pay to sit inside a video game and talk. We are the primary targets of cash shops; we fund F2P and B2P games by buying cosmetic gear and emotes, and we quite literally subsidize the gameplay of manic PvE and PvP players who’d otherwise grow hysterical over P2W. Sure, we’ll whine about chat bubbles and sitting in chairs occasionally — and ohmygod Runekeepers are the worst, right?! — but for the most part, we lap up the lore and don’t make much trouble. They already have us.

And we keep coming back even when we don’t really have time to roleplay as we once did. We just like to be around it, to remember those roleplay-enforced servers of yore, and to imagine 40 or 50 years from now when we’re all going to retire and fill our endless hours joyfully roleplaying droid engineers and bowyers and poets once again.

In the meantime, there’s Ever, Jane.