If you are not a subscriber to DC Universe Online, you’re still sitting back on the sidelines anticipating the release of Halls of Power Part II next week. We all know trying to be patient isn’t the funnest thing when you are looking forward to diving into your favorite game’s new content, so we talked with Senior Creative Director Jens Andersen and Design Director Jesse Benjamin during a DLC preview to glean some interesting tidbits to share with you while you’re wait.

Of course, we also have some information that those members who are busy playing through the DLC right now might want to stop and take note of. Andersen shared some words on plans going forward, probably the most notable being DCUO’s planned shift away from DLC.

Calling Jack Kirby’s Fourth World saga a magnum opus, Andersen paid homage to the popularity of the New Gods characters in animated works and more; two examples he pointed out were that Darkeseid and even the villain’s home world Apokolips made appearances on the television show Smallville, while Weather Wizard was featured on the show Flash. It is from this saga that the Halls of Power trilogy pulls its inspiration. Part II brings even more of the characters into play, like Granny Goodness.

If you are a fan of Granny Goodness, you’re in for a treat: You’ll get to experience her shenanigans plenty in her orphanage, the Happiness Home. Granny is tasked with evaluating how much of a risk the heroes and villains of earth are to Darkseid and his agenda (which Andersen says Daybreak will “reveal in future episodes — but not quite right now”). The Happiness Home is populated by the disenfranchised youth of Apokolips along with folks from earth whom Granny kidnaps to brainwash to be loyal Apokolips citizens using various conditioning techniques and propaganda (watch for neon signs like “Shed another’s blood and Granny sheds tears of joy!”). As such, players will run into and fight various familiar iconic faces, like Hawkgirl and Weather Wizard, as they themselves are tested.

There are different mechanics involved in this DLC. “The mechanics in these fights and the levels themselves are really great,” Andersen told me. “The level designers have outdone themselves; [there are] a lot of very fun and clever mechanics.” One mechanic is using color-coded consoles to remove shields from your foe, adn another involves dragging beams to colored shield generators on the ground (I hope all my color blind friends survive these tasks!). Perhaps my favorite part of the Happiness Home is the Wind Tunnel puzzle test. Just watching the dev team trying to coordinate and maneuver through the obstacles in order to turn them off was quite entertaining! If you pass this test without any errors, you earn a feat; the same goes for other tests.

In total, Halls of Power Part II has two duos, a four-man alert, an eight-man operation, and an eight-man raid as well as the solo missions. For solo play, both heroes and villains travel to the surface of New Genesis via teleporters in their headquarters and take part in the battle as parademons from Apokolips invade the planet. Players will also be able to travel to Nekorpolis again as well as enter the power core of Celestial City. 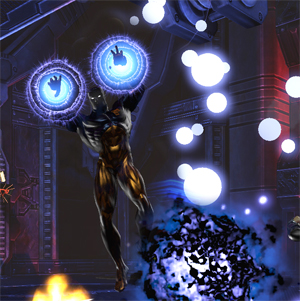 A new DLC means new gear! For villains, there is a suit based on Kalibak and one inspired by the parademons’ leader, Steppenwolf. The heroes have styles modeled after Big Barta and her husband, Mr. Miracle, who both had ties to the Happiness Home but broke free. You can get these sets off the vendors using the Marks of Victory currency.

It doesn’t end with armor. In the first Halls of Power, players were were able to get collection rewards of different weapons from the old gods to place as decorations in their bases, In Part II, players will see some of those styles incorporated into useable weapons for their characters.

Another change introduced with this DLC is the new loot picker, which is exactly what it sounds like: When a foe is vanquished, players will get a pop up that offers two or more different loot rewards that they can select from. While there will always be at least two pieces of gear to choose from, in some situations there will be other stuff, too. For example, raids will have a much larger selection of loot pieces. “This is from feedback we got from our players about wanting to have a better chance of getting some of the gear they wanted,” Andersen explained. “So we increased the chances and gave them a choice.” There can also be base items, plans, and more as possible rewards to choose from.

While much of this playthrough focused on showing off various cool parts of the gameplay, Andersen also talked about Daybreak’s move away from DLC. DCUO is switching to an episodic delivery system. Part of that is a change in verbiage: Halls of Power Part II is now referred to as an episode instead of a DLC. But the change is much more substantial than that; it better reflects how content will be distributed moving forward.

There are two big benefits to to changing the content distribution model. For one, Andersen explained that players wanted content more frequently, even if it means less content at a time. The DLC as they currently are were designed to be three-month chunks of content for fans to play through to get geared up for the next DLC. On top of new gear, each DLC had six pieces of content between the duos, solo content, raids, alerts, and operations. In about three months, DCUO will switch to putting out monthly episodes that will contain two content types. In a three-month time it will still equal the same amount, but players will get to experience new content more frequently instead of waiting for it all to come at once. For example, in one episode players could get a solo content and a raid, and in another it could be a duo and an operation.

The switch to episodes will also affect gear progression. Players will get a full set of gear in one episode, but another episode will have the rare gear. Additionally, something players are going to notice that there are no set bonuses! Andersen explains that in order to give players even more customization, DCUO is switching to a rare item affinities system. He said,

“Rather than having a set bonus attached [to gear], we let you choose. We’re actually going to actually let you pick what bonus you want to assign to the rare item when you have affinities. These things can be mixed and matched by you how you see fit [so it] suits your playstyle, your build. So players are allowed to build their own bonuses into the unique rare gear that they get.

Another key difference is that these episodes, which might be offered ala cart, will self-contained stories in a non-contiguous order instead of bundled in three-month blocks. Players can pick and choose which content they want and skip others without affecting the story. This part ties in a bit with the second reason for having episodes vs. DLC. What about the unfinished stories of the current trilogies? Players needn’t worry, as those will still be wrapped up.

The second big benefit is tying into the DC universe in a much more timely fashion. Andersen talked about how DC, as a partner of the game, gives the team a heads-up on upcoming stuff in the comics, television shows, or animated movies ahead of time to give them a chance to incorporate the stories and characters into the game. With the DLCs, that just wasn’t possible; those packs took months of preparation and were based on a very specific story arc. In other words, you couldn’t just throw in a cool new character because it didn’t fit. With the self-contained episodes, DCUO can introduce things even if they doesn’t tie in to some overarching theme, and do it quicker. In fact, the first episodes in the new system will be just one of these opportunities to introduce something, but Andersen initially said he couldn’t quite announce the details yet. “It ties directly into something DC is doing,” he assured, “which is a long-requested thing that our players have been asking us to do.” He expounded,

Thanks to a tweet, we now know what that is! From the official announcement: “Players of the PC and PlayStation game DC Universe Online can also expect to see playable Bombshells Legends characters in addition to a unique new Episode for players to jump into action alongside them.”

The wait is nearly over

So how much longer is the wait to jump into the newest content? Halls of Power II becomes available for purchase by non-subscribers on Tuesday, May 19th. The DLC — er, episode — is priced at $9.99.