I spent a ridiculous amount of time playing Blade & Soul just moving around.

Most of the time in a given game, I’m moving around because I’m trying to explore the game world I’m inhabiting. But during my hands-on with the western port of the game at this week’s NCsoft press event in California, I found that what drove me to move wasn’t really exploration in the strictest sense; there were no obvious points of interest drawing me in for a closer looks, and even after I had a pretty solid grasp about what the zone layout looked like, I was still getting to the highest vantage point and springing off. I was just jumping around and gliding through the air because just moving was fun.

I didn’t expect to care much about moving, but I didn’t expect to care all that much about Blade & Soul in the first place. Leaving aside the fact that I had long since given up any hope of the game ever coming out in America, I thought it seemed kind of surplus: just another vaguely wuxia title in a market full of them. After playing a bit of it, though… well, I’m hardly an expert in that subgenre, but now I’m actually interested in playing more.

While there are lots of neat parts of Blade & Soul’s character creation system and outfitting, I didn’t get to play around with most of them. The low-level character that I used to get a taste of the low-level gameplay had only one costume, and the high-level characters had just a few costumes to choose among. The bits I did get to demo were the early story questing and the mid-level combat experience, both of which were exciting for their own reasons.

The intro quests were of the usual straightforward variety, although it’s critical to note that localization is clearly still in its early stages. The voiceovers are probably not finished, and they don’t always match the subtitles and aren’t very good… but then again, maybe that’s intentional, since the game is doing its best to really emulate the wuxia storytelling style.

It’s a very solid emulation of that style, too; the introduction involves your master and your fellow students being slaughtered because of course it does. I got a peek at a later cutscene that involved so many cliches gleefully being flung around that they could be used to build a house. I say that without malice, though; it’s a cliche storm with the most cheerful intentions possible, and most importantly it’s fun.

It’s very much one of those games where you’re either going to enjoy the story and what it’s trying to do or you’re going to find it tedious. I can’t tell you which it’ll be for you, but for my money it’s relishing in the cheesiness, and that’s to its credit.

Not that any of that matters in the long run; this is an MMO, and it’s specifically one marketed on the strength of its movement and combat. While the story is cute, it’s not reason enough to play on its own. On the plus side, you already know I enjoy traversing the map. 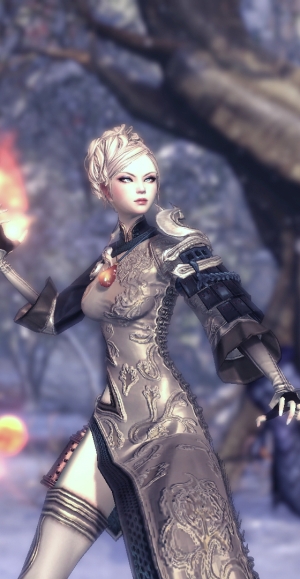 You get the ability to sprint and glide around very quickly, and in emulation of the genre there’s little reason to not be hurtling through mid-air acrobatics on the regular. Sprinting (and later air-dashing and diving) makes use of a stamina bar, which refills quickly when not in use but does limit your swift movement. Gliding, however, does not use stamina, which leads to an interesting aerial dance: You sprint, take to the air, and then alternate your quick dashes with period of gliding. I’m fairly sure you never actually graduate to full-on flying, but you do always have a great deal of space to play around in the air.

All of it feels very organic and easy to control, although I admit that sometimes I was mixing up which buttons to press and when in order to maximize my air time. The game’s environments are built to support this motion, too: There are lots of floating islands hither and yon, sheer drops, areas that are clearly meant to be navigated by flitting through the air with nary a care in the world. It does raise the question of why one of my character felt the need to wear platform heels while sprinting and gliding all over the world, but I suppose that’s just the baggage the game needs to deal with for some reason.

Combat does not make use of these transport mechanics, though. In theory, that’s to its detriment. In practice, though, enough is going on with combat that I’m willing to forgive it. It also neatly avoids the problem that World of Warcraft has encountered with flying: You can easily glide in on your approach, but getting out isn’t as simple as mounting up and going – you have a hard ceiling on how high you can jump.

But I was talking about combat, and that’s a whole different can of worms because combat isn’t what you expect when you’re told “active combat.” A lot of MMOs have active combat that isn’t really active combat. WildStar has a lot of dodging around, but the fact is that you still are fundamentally playing an RPG with all the baggage that entails. You need to dodge the telegraphed attacks, but the other attacks you can’t dodge, no matter how elegantly you weave away from the animations.

Blade & Soul isn’t really like that from what I saw. There are no limits to what you can or cannot dodge; everything involves enemies going through motions and dodging. It’s closer to games like DmC or God of War in feel, which is significant – it’s not something you see very often in an MMO, if ever.

While you have a variety of skills, a larger portion of them are contextual. Playing the Destroyer, a melee class with a two-handed axe, I had skills to stun or disable enemies, which I could chain into a grab, which I could then chain into a variety of other skills. Forcemaster involved fewer explicit chains in places, but there were still some pretty potent combinations available, like using a grab, push, and root to throw out a huge fireball with no risk of interruption.

And if you want to use that period of time to hold your victim in a fire field you’ve laid down, well, that’s just natural.

The closest thing I can compare the feel to is a fighting game. It’s an interplay of dodging, blocking, and creating openings for your skills. You’re never perfectly safe, but smart play allows you to disable or punish your opponents for giving you a spare moment. There’s a fairly universal resource to manage, and for most classes it seems as if your left mouse button will build resources while your right button is your major spender, but everything works a little bit different, and even the two ranged classes I played with (Forcemaster and Summoner) felt very different in play.

I took the opportunity to play around in one of the game’s solo instances, which reminded me of a better version of TERA‘s BAM fights. It wasn’t terribly difficult, but I think a lot of that came from practice rather than from the nature of the fight; I was playing very defensively and had to spend a great deal of time dodging, controlling, and getting in opportune shots.

There’s a lot of other neat stuff that I didn’t get to play around with in any great detail, but the overall impression I walked away with was positive. When I came in, I didn’t particularly care, but the game looks and feels like a very responsive and polished action game with a lot to recommend it when it finally comes out later this year. There are things not to like about it (again, platform heels), but boy, is it a fun ride when you’re playing it.

I can’t tell you how it stacks up against, say, Age of Wushu or points related. But I can tell you that it’s pretty darn fun.

Disclosure: Food, travel, and lodging were all provided by NCsoft for the purpose of this preview. Most of the food, anyway; I checked out a Caribbean place just a stone’s throw away from the hotel. It was pretty good, but its fried plantains left something to be desired.
Advertisement