OK, maybe that title is overly dramatic. Still, I feel guilty for liking Grand Theft Auto Online. I’ve touched on this before, as have a number of you in the comments of a previous article, but as it’s the only video game that’s holding my attention here lately, I’m loathe to let it go even though it forces me to run rough-shod over pixelized policemen.

It’s not just the violence, either. Rockstar delights in provoking pretty much everyone, whether you’re a leftist, a libertarian, or somewhere in between. There’s so much irresponsibility assaulting you from every angle courtesy of the game’s NPCs, its radio disc jockeys, and its highway billboards that it’s hard to know where my facepalming should begin.

So I guess I’ll just go back to the violence.

I’ve killed, what, 500 thousand goblins in my MMO career? A million? Who knows. And the rats! Let’s not even go there. I’ve ended thousands of humanoids, too, NPC and otherwise.

So why does it give me pause to run over a cop in GTAO when running through an unsuspecting orc who was minding his own business in Lord of the Rings Online doesn’t even register on my personal morality meter? The easy answer is that one simulates reality (quite well, at least visually) and one is pure fantasy. There are no orcs, but there are police officers who — more often than not — protect and serve.

I’m not sure that’s the whole answer, though, at least in my case. I think my love/loathe relationship with GTA has something to do with its feature-completeness, which is a sore subject that I’ve touched on in just about every MMO editorial I’ve written over the past five years. See, modern MMORPGs are almost exclusively about killing. A few of them add in some bare-bones crafting or auction house gameplay, but by and large, this genre has devolved into combat simulation. 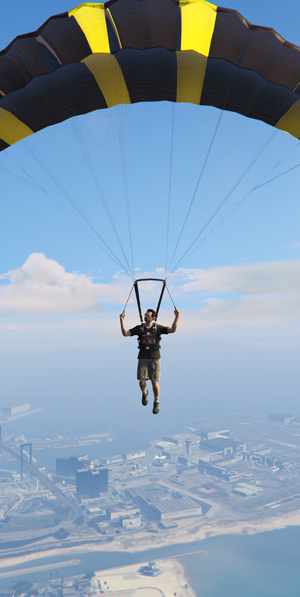 GTA, on the other hand, is more MMO than most MMOs, at least if your definition of MMO, like mine, involves total immersion and copious amounts of non-combat gameplay. MMOs are, or should be, virtual worlds, in other words. While it’s true that you won’t get very far in GTA V’s single-player game without lifting a gun, that’s not the case in GTAO. I can basically forego the typical life of crime for a life of golf, tennis, air/land/sea racing, and several other crazy fun gameplay activities.

Sure, I won’t gain as much XP if I concentrate exclusively on these things as opposed to grinding missions and mastering their kill crazy rampage mechanics. But I can nonetheless exist in GTAO’s virtual world as something other than a murder monster.

This possibility makes the actual murdering and monstering a bit more problematic. That citizen bleeding out in the gutter back there from a belly full of my bullets didn’t really have to die. I chose to make him die because, um, quicker XP.

Which is somewhat unsettling, isn’t it? Yes, it is, even though we’re talking about pixels.

I hate to summon the ghost of Jack Thompson, but GTA and all its ultraviolence is basically the gaming industry — hell, maybe the entertainment industry — in a nutshell. The talent is purportedly there, the megabudgets are there, and yet the vast majority of what we consume as gamers is all about sticking the pointy end into the other (wo)man.

Have you ever asked yourself why that is? Have you ever wondered why, despite all these highly paid professionals with decades of game design experience and state-of-the-art tools, we’re still getting kill-X-of-Y-then-fight-a-boss some 40 years after video games became a thing?

Is it because we need some sort of virtual space to act on our baser instincts? I’ve heard that theory floated before, mostly by MMO griefers who erroneously hold that their griefing has no bearing on whether or not they’re a good person. Is it because devs don’t know how to do anything but combat or that combat is the only thing that they think will sell? That can’t be; Minecraft and its many offspring prove otherwise. Is it because we as a species are simply destined to be cruel to one another, both in meatspace and virtual space, no matter how much we pretend to be enlightened, advanced, and theoretically civilized?

I don’t know, but these are the things I can’t help thinking about when I play GTAO. It’s a beautiful and a dreadful piece of work: beautiful in its breadth and its execution, and dreadful in its reliance on the shopworn kill-or-be-killed gaming cliche that ultimately renders all of its non-combat gameplay into an afterthought for (most?) users.

Despite that, I still enjoy GTAO, though there are frequently moments when I’m reminded that I shouldn’t. I’m not sure what’s to be done about that, since GTA is one of a very few franchises (and probably the only big-budget franchise) that pays more than lip service to the creation of a virtual world. GTAO, despite the fact that it features a 30-player cap on each “server,” feels more alive than any MMORPG I’ve played in recent years. MOP commenter manaek05 summed it up pretty well in the comments of a previous column:

“Just stand on a street corner for a few minutes, in the middle of Los Santos — and you will see the city living its life. Cars moving, NPCs interacting with each other. NPC police chasing NPC criminals. Other NPCs who actually walk around and do stuff. Ambulances driving to the locations of accidents. The GTA 5 world is alive, to the point that you get the feeling that if you turn off your PC, the city is still living its life.”

Given that, and given the utter lack of a similar feeling in modern MMORPGs, I find myself wilfully overlooking the amoral center of Rockstar’s latest opus. Can you blame me, really? When’s the last time you logged into an MMORPG and saw players milling around a town or a city as manaek05 describes? Like, never? Players are too busy killing mobs or each other, rushing to and fro in their eternal attempt to raise their character stats.

… which is achieved almost exclusively via violence, and which ultimately makes me less inclined to hate myself for loving the way I play GTA Online.

Yeah, I kinda gotta agree with other people…. you’re over analyzing a game.

pid I’m a healthy person and I am not disturbed by any level of violence presented in GTA. What is your point? I can make the distinction between fantasy and reality.

@pid I was born and raised in Canada, so I recognize the Italian view of apology completely, and I agree.
Cheers!

mysecretid pid In Italy apologizing is a matter of politeness, maturity and mental sanity. There is no need to maim a buddy over irrelevant arguments. We are all here to have fun and I don’t want to ruin anybody’s. Quite the contrary, I want to have a good time with all you fellow gamers!

pid I’m always impressed by people who have the courage to apologize, particularly on the internet, where there is absolutely no requirement to do so.
Respect to you, pid.
There’s a saying, “In Japan, an apology is considered a sign of respect; in America it’s considered a sign of weakness”.
I find it actually takes great strength to admit when one has been wrong, particularly in public. Salute. o7
Cheers,

CazCore pid Hey buddy, I re-read your comment and I apologize. If I could edit my post I would, but it’s to late. So that stain will remain, but it’s on me because I misunderstood your whole reasoning! Peace to you V

pid
“healthy people aren’t disturbed by the ultra-violence”
i didn’t say that at all.  not even close.

It’s not the realism alone because movies are still “better” at realism.

It’s the realism combined with the interaction, which gives the “choice” of WHEN and HOW. But you have no real ALTERNATIVE choice. Whatever you choose, you’ll kill those 40 pixel-people. You cannot choose to avoid it altogether. The only thing you can do is NOT PLAY at all.

The MOP Up: Life Beyond beefs up building

Global Chat: Would it be easier than assumed for World of...