Here’s a fun thought: What if we aren’t actually playing MMOs? What if we’re just sitting in front of blank screens, creating fantasy worlds with our imaginations and keeping ourselves company with phantom figments? What if they’re about to cart us away right now?

Oh, probably not. Probably. Either way, reader Mjcbarnes has great fun with her imaginary friends in-game. “Attached is a screenshot from Neverwinter’s alpha,” she submitted to One Shots. “For a time there was a bug where you could have more than one of your companions out at a time. It was awesome running around with two companions like a proper party. Here’s my rogue Nora with her dire wolf and a kobold companion. I took so many screenshots of the three of us. It was the best bug for cool screenies.” 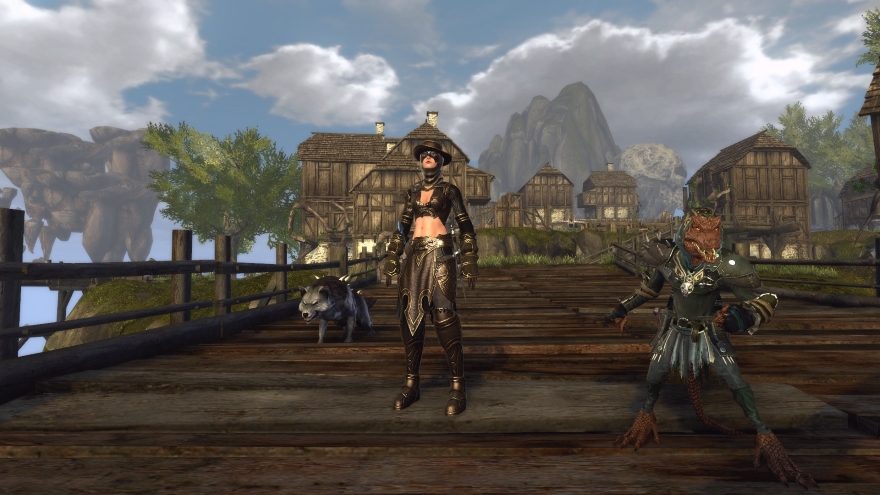 Sometimes you don’t have to seek out that perfect screenshot — it just comes to you. Reader Wratts had this happen and managed to hit the print screen button to preserve the moment.

“I wanted to send in an ArcheAge screenshot,” he said. “This is one I took around holiday time. It was the first time I saw a GM-generated snow event. I just happened to be in Auroria around the burning forest. The combination of flaming trees, falling snow, and a new continent to explore really made me want to do a cap.” 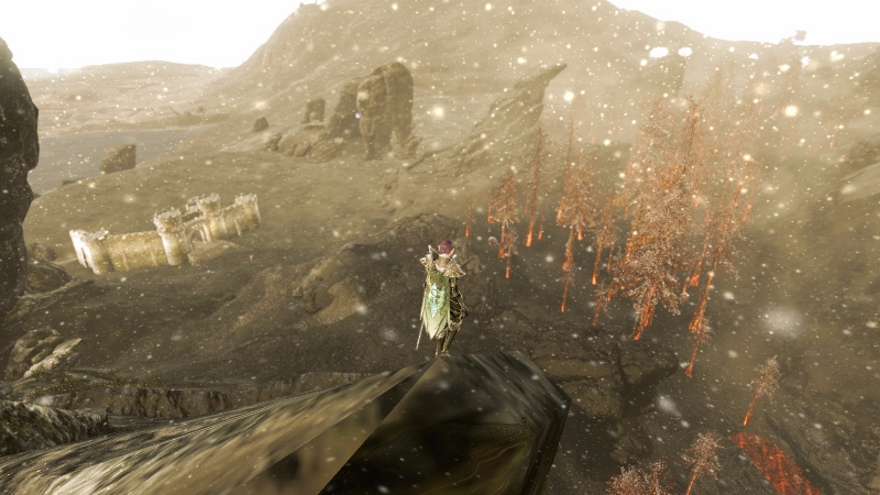 My call for alpha and beta screenshots did not go unanswered. Not only did we get Mjcbarnes’ above, but we also got reader Siphaed’s adventures through Guild Wars 2’s beta tests. Remember back when that was the hottest ticket in town? And now the expansion’s beta is? We are just gaming in circles here.

Siphaed sets the stage: “This is in a alternate version of Metrica Provence where they set up the Hunger Royal event for players to participate in. This is the original version that Southsun Survival was based off, although this one’s freedom and lack of Karka made it all that much more special. I was the 4th to last person to survive; I ended up starving alone in a swamp where the Hylicks roam. Good times.”

Ralph the Wonder Llama makes me laugh. Here’s what he wrote to me: “‘Your screenshot challenge of the week is to send me more dragon pictures! Seriously, anything at all with a dragon theme will be great! Please, fill my in-box with dragon pictures!’ What? That’s not the screenshot challenge of the week? But I could have sworn! Well, I’m pretty sure that’s what I heard… and I’m rarely ever wrong. Many moons ago my warrior was making use of TERA’s local taxi service in Darkquaver Woods when I snapped this screenshot. The sunlight and the clouds and the mountains and the trees made for a really beautiful image, I thought. And then of course there’s the dragon. And I know how much you love dragons! So I just had to share!” 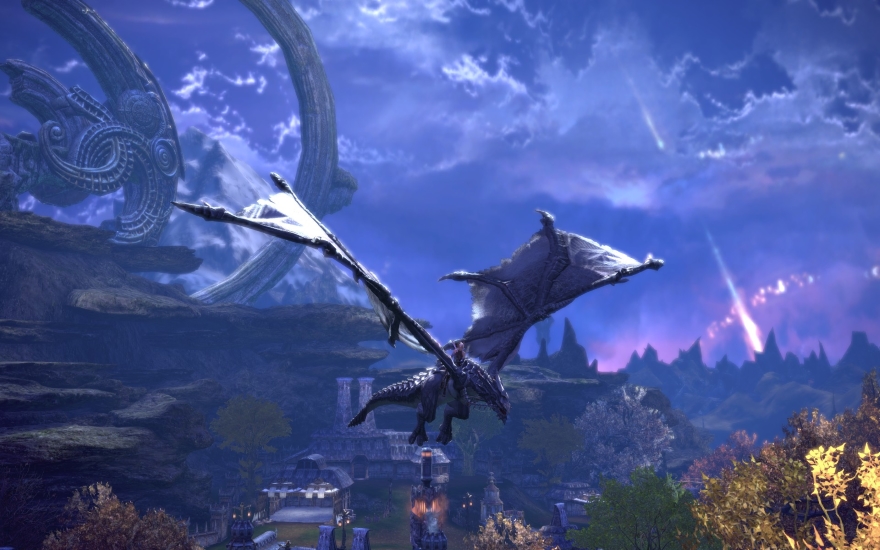 For my It Came from the Comments Section, reader Xephyr has just one word for you: Cantha. CANTHA. Cantha cantha bo-bantha banana-fana-fo-fantha. Me mi mo mantha. CANTHA! 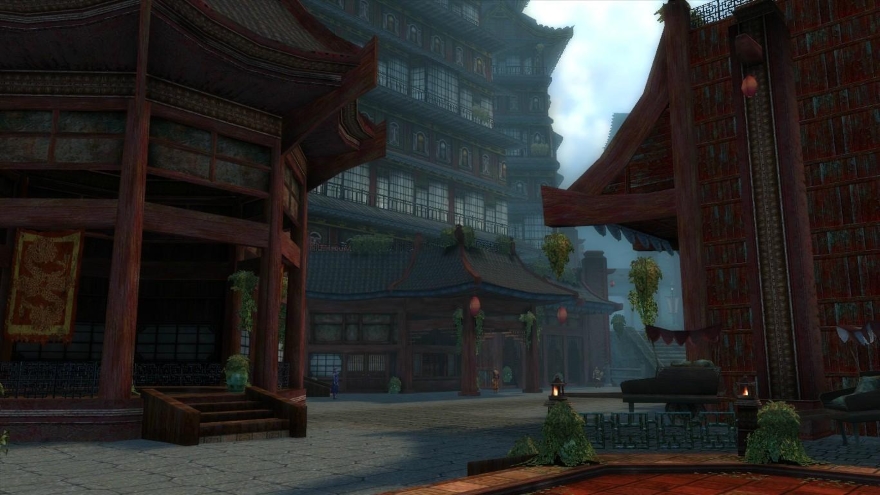 What’s the screenshot challenge for this week, you ask? We might have done this one before, but I like it, so here it is again if so: Take and submit your favorite pics of MMO starting zones and explain why you love them so much.

Nice shots this week, happy memories of Cantha. I revisted it last week, gw is such a great game.

JudgeDavid101 Koshelkin It’s good not everyone is succumbing to the overboarding negativity in the internet and enjoys games for what they are.

Koshelkin One of the better things about WoW and WoD has been the character model updates, I’ve played through old content with new alts to level 58 then TBC and WOTLK, Cata & MoP with the new models and it’s like playing the game anew. The WoD content is fun but that has met with an almighty amount of problems.

The flight news last week was a shock but after the shock had faded I realized nothing has changed since the launch of WoD and there are still some good parts of WoW, especially the old content with the updated models. It is a shame WoD has had so many hiccups it’s jaded the view of WoW for a lot of people judging by how the Internet melted down on critical mass over the flying issue but I’m over the shock now. That is because I’ve not got any flying mounts from the game shop. Nothing has changed for me. I can understand the pain felt by those who have spent cash or a lot of it in the game shop and are still reeling from all of these flight mounts they have paid for with real money and can’t fly them in the new expansion. I can understand they will feel like they have got the raw end of the deal. I hope they resolve their grievance with Blizz soon as WoW is a great game and I hope those who are trusted with its future development don’t break that trust with those who have forked out a lot in the game shop on flying mounts and other things. I will continue to play for a while but I must admit I’m waiting to see what the Blizz people are going to decide next, sometimes with an ironic laugh and shake of my head, but it’s better to laugh, I suppose. The game is the most important thing in the end.

I have done road trips since the no flying thing in WoD. Pandaria is a good road trip. Ironically, flight is enabled there.

No. Seriously. Don’t fuck with this.

dirtyklingon AilsaN10 Perhaps I should have identified it as a refined, upper-crust sort of thing rather than assign a gender to it.

dirtyklingon AilsaN10 I firmly believe there’s no such thing as guy things and girl things except for clothing… and even there some people might disagree.

JudgeDavid101 Wow. What an impression for an eleven year old game. The character overhaul really paid off.

Even though she’s a bad ass off the mean streets, she still uses the lady-like pinky lift while consuming her favorite adult beverage.

wolfyseyes Just so you can get into the right frame of mind: https://www.youtube.com/watch?v=njHMKeNiXhA