END_OF_DOCUMENT_TOKEN_TO_BE_REPLACED
Two things are coming up in Star Wars: The Old Republic that I’d like to talk about. First, BioWare is bringing back the Night Life (Festival of Splendor) Event on Nar Shaddaa. It’s a gambling event where players can win different prizes by playing slot machines. Just as in real life, the house always wins, but I’ve got some tips on how to make the house a little less likely to clean you out.

Second, Alex Modny and Eric Musco talked to Bad Feeling Podcast about some very important changes that are coming to the PvP reward system that might entice some players to jump into PvP, especially ranked PvP. Let’s dive in. 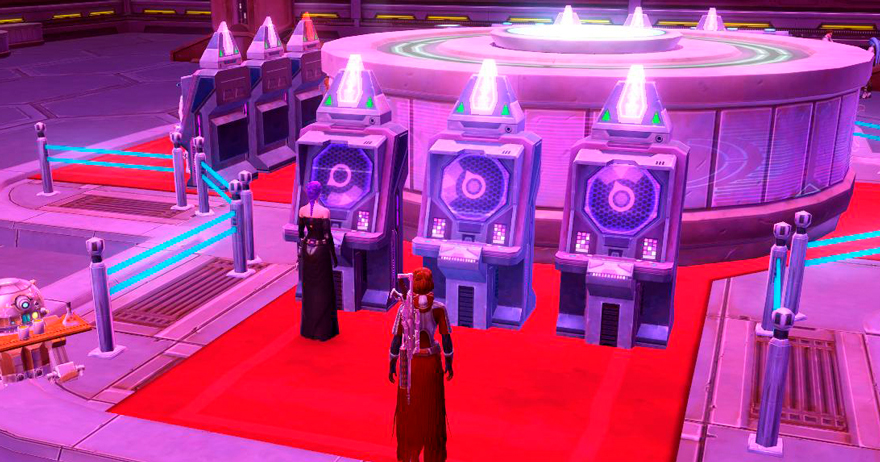 A year ago, the event on the floating Star Cluster Casino and Club Vertigo seemed to be a way for BioWare to sink some of the players’ loose credits back into the system. As I said on Massively-of-old, I am not a fan of gambling events in general because they set the expectation of winning high when the truth of the matter is that it’s designed to take your money. But we aren’t here to discuss the philosophy of gambling. We want to discuss ways to actually get the most of what you’re putting into the event.

Even though the event is only next week, we have no idea what the prizes actually are. But we do know what was offered up last year, so we can assume that there might be different prizes even if the mechanics are unlikely to change. I hate to brag, especially because it’s all about luck, but I was able to win a Rancor and gain all the achievements in fewer than 400k credits. I was very lucky, but I also played it smart.

If this year’s numbers are the same as they were last year, then we can extrapolate the chances of winning each prize.

The numbers behind gambling 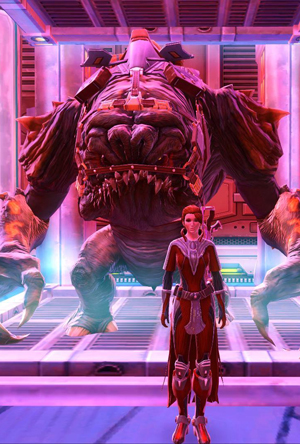 Last year, the numbers looked like a bit of algebraic nonsense, but they should give you an idea of how things will work this year. On the Smuggler’s Luck machines, you have a 29.68% chance of losing, a 50% chance to get your token back, a 10% chance to get the “Feeling Lucky” buff, a 5% chance to double your token or get a Kingpin Token, a .3% of getting a Golden Certificate used to buy things off the vendor, and a .02% chance that the machine will blow up.

Do not go to the Kingpin machines without a “Feeling Lucky” buff because you’re almost guaranteed to lose. But with the buff you have only a 29.59% chance of losing. You also have a 64.81% chance of playing again, a 5.18% chance of getting a Golden Certificate, a .298% chance of getting a Vectron Opus, a .07% chance to get the rancor, and a .02% chance that the machine will explode.

Last year, I ran a couple of slots at once to maximize the cooldown. You cannot hit more than two additional machines before the first one is off cooldown, so don’t be a jerk and hog four. In fact, I’d say just do two if there are a lot of people around. I did, and I spent only 400k. I would play through a stack of Smuggler’s Luck tokens, hopefully gaining a good stack of Kingpin tokens in the process. Then I would hop onto the Kingpin machines after gaining a “Feeling Lucky” buff on the second stack. Protip: Watch your buff; don’t listen to the machines. Once you’ve won something other than a free turn on the Kingpin machines, the buff will drop off. The buff will drop off at least a full second before you hear the jackpot noise.

The Nightlife event will start on June 9th and run until August 5th. Participation does not require a subscription of any kind, but do remember that there is a credit limit for players who aren’t subscribed. Happy gambling! 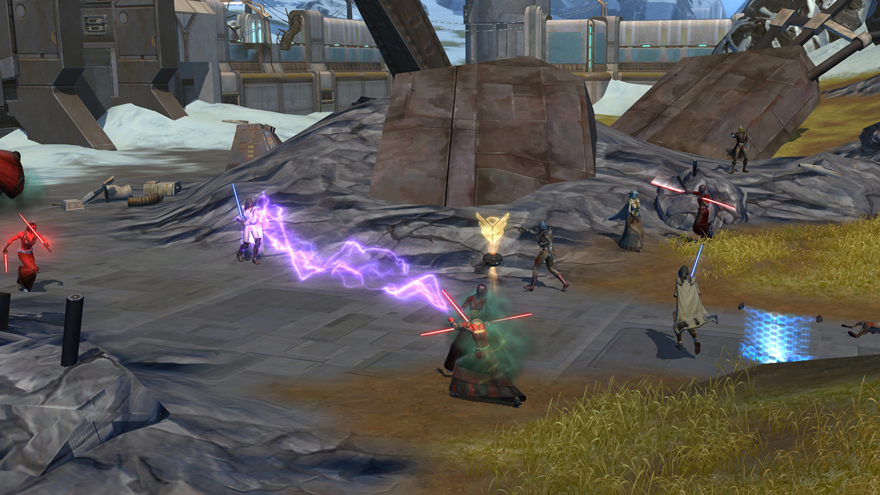 Normally, the topic of this second point of interest would have me groaning because it’s about PvP, and as I’m sure most of you are aware, I just don’t like the way that BioWare handles PvP. But I am slightly optimistic about the upcoming changes. Don’t get me wrong; I still think the game’s PvP development is craptastic. But when I heard that BioWare is planning on completely removing ranked comms and reducing the cost of PvP gear overall, I thought I was dreaming.

The current plan (which is subject to change) is to convert all ranked comms 1:1 to regular warzone comms in Update 3.3. As for the cost reduction, the current 168 mods cost 400 WZ comms and the 174 mods cost 800 ranked comms and 400 WZ comms. Look for the new mods to cost only 150 WZ comms and 400 WZ comms respectively. That’s about a 33% reduction on the lower tier and 81% on the higher tier. I know one person who has two thumbs and will actually get a full set of high-tier PvP gear for the first time in forever: this guy. (You can’t see it, but I’m pointing to myself.)

Additionally, you will not be able to solo queue for ranked warzones without an expertise rating of 2018. All solo-ranked players thanked the PvP gods for that one. It will reduce win-trading, and frankly, the number of people who have no clue what ranked PvP is about. Unfortunately, this will not apply to grouped ranked warzones. 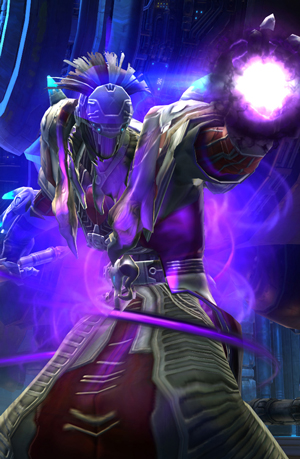 I’m not really sure why the developers decided that now is the time to address an AoE channel blocking issue that wasn’t really an issue, but there you have it.

. [Update: BioWare announced yesterday that 3.3 is tentatively scheduled for July 21st.] But if you’re interested in jumping into the game to find out what ranked PvP is like for your server, I do have a refer-a-friend link that will give you 7 days of subscription service (among other things) if you haven’t been subbed for over 90 days. If you do end up subscribing, I get 600 Cartel Coins that I end up using for giveaways on our livestreams. Sweet deal all around.

Every other week, Larry Everett jumps into his T-16 back home, rides through the hypergates of BioWare‘s Star Wars: The Old Republic, and posts his adventures in the Hyperspace Beacon. Drop him a holocom on Twitter @Shaddoe or send him a transmission at larry@massivelyop.com. Now strap yourself in, kid — we gotta make the jump to hyperspace!
newest oldest most liked

I actually think-for an mmo-the pvp in SWTOR is quite fun (if also quite dead at the ranked play), despite their team making poor decision after poor decision. I’m one of those people who thinks balance is a fool’s game to angst over, so their poor job on that front hasn’t really raised my hackles that much, though I admit those bad decisions have slowly snowballed over the years; ironically, SWTOR’s incredibly slow development rate has actually been a positive in that situation.
This decision to make aoes unable to cause node interrupts though…well, I’m going to try to be rational and assume it has to do with Sorcs/Sages.
The chances are rather high in any sustained group vs group fight that you’ve got a bunch of sorcs/sages mindlessly dropping aoes everywhere because the damage is way better than it should be, and racks them up massive total damage numbers on the scoreboard. But, one would think the obvious design choice if you want to have a class with such effective aoe is to give it a downside that helps to balance its damage potential without screwing up pve.  The most obvious answer would be that channeling their aoe opens up some sort of vulnerability on the caster, ie: when a sorc/sage is channeling an aoe, he/she takes X% additional incoming damage.

Smiggins they already have : play on a PvP server ? ;)

CrowingOne Yep, I like SWTORs pvp the best of what I’ve played(though I did enjoy the occasional AV turtle in WoW). The matches never last too long and usually its pretty evenly matched.

Not interested until they take the PVP out of the instances and into the open world.

At launch SWTOR PvP was easily the best balanced MMO PvP system that I’ve ever seen. Actually Taugrim said that, but I agree with it completely. Since the massive stun and resolve changes with 1.2 or 2.1, I forget which one it was, SWTOR PvP is now carp!
“We’ll always have chat bubbles, Larry.”

Bioware has been clueless about handling PvP. They got Mythic to partially clone functional pvp into Swtor which became too limited by it’s own engine to succeed. I used to love it but became tired of the POINTLESS gear grind just to be even with everyone. There is a reason why pre-cap pvp is universally considered more fun: Gear isn’t so much of an issue minus the few who twink.

I’ve screamed this at them since day one: Get rid of the gear grind outside of ranked and simply allow ANYONE full, balanced access to pvp. Gear should play no role in casual pvp.

Outside of that they also can’t balance classes to save their lives.  Bioware cloned mmo mechanics and now is suffering all the drawbacks of it along with a cap engine that will never allow the game to become what it could be.

They go story down but nearly every single idea they implemented trying to make the game into an mmo has failed hard.

AceOfDymonds This is true… I forgot i wrote that in this piece.

I love pvp in SWTOR. I’m having a blast! (pun intended)

Looking forward to how these changes pan out. I’ll see if I can tear myself away from warzones long enough to check out the Nar Shaddaa event. Thanks for the rundown, Larry.

Maybe they should combine gambling and PVP and save us all time.  Pull a slot, and if you win, somebody random dies.  It plays music if it’s somebody on the opposite faction and if it’s from your team, well l2p noob.  It would also need a tiny chance that you die on a bad spin.  Maybe tack it on to the chance you get the rancor mount, but you die before you can claim it, lololol.

Another year of casino events and another missed opportunity to add pazaak to the game.  I’m not asking for Golden Saucer, just one mini game that you managed to put together pretty decently a decade ago in KOTOR.  You could tie it into a story, you like stories don’t you Bioware?  Isn’t that your focus now?  The criminal underworld element of Star Wars is a great opportunity for new stories not tied into the Force or the War, it was great on Makeb.  Do more Makeb!

Vague Patch Notes: BlizzCon’s cancellation might just be for the best

The Daily Grind: What are the MMO starting zones that feel most welcoming to you?

LOTRO and DDO extend promo, give away zones, discount expansions, and...