I read with disgust a recent GI.biz piece about free-to-play and its supposed coming of age. The business model has of course run amok through the western MMO industry since Turbine’s Dungeons & Dragons Online started the dominoes rolling in 2010, and it has been the weapon of choice for separating browser/mobile game players from their money since browser/mobile games became a thing.

Whether or not free-to-play is actually good for the long-term health of the game industry is up for debate. But you wouldn’t know that if you inhale the PR smoke commonly blown by development firms that owe their existence to the business model’s built-in saturation potential rather than their ability to make quality products that consumers value.

“F2P PR needs someone who knows what they’re talking about to talk about it, there is so much bad feeling out there, that it’s evil and so on,” says one Fabio Lo Zito, a public relations manager at browser-turned-mobile developer InnoGames. “Games media is traditionally heavily opposed to F2P,” he continued, “so those people need to be able to talk to somebody from a F2P games company that gives them a bit of insight.”

This quote is all kinds of problematic, so let’s start with the obvious question. Lo Zito claims that journos need a bit of insight, but insight into what, exactly? Free-to-play’s evilness, or the lack thereof, is completely subjective. Not only that, but the majority of free-to-play models in the MMO and mobile space are patently exploitative. For every truly free Marvel Heroes or League of Legends there are two dozen truly awful ArcheAges and Star Wars: The Old Republics that either heavily incentivize pay-to-win or heavily incentivize the “optional” subscription via a series of brutal freemium gameplay restrictions. That is why the free-to-play model continues to enjoy its less-than-stellar reputation in MMO gamer circles even as it rakes in millions upon millions of dollars for casual-focused shovelware outfits around the globe. 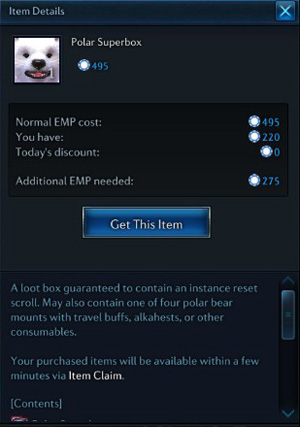 I am a member of the games media that Lo Zito is ostensibly referring to, and I have spoken to many, many people from free-to-play game companies over the past five-plus years. Funnily enough, none of them has had any sort of insight into free-to-play other than “it works for our company.”

You know what else works for big business? Outsourcing. Walmart wages. Customer service reps who can’t speak the language of the customers. But you don’t see PR people extolling their virtues, right? So why the desperate need to legitimize free-to-play?

Can’t developers who rely on the model just be happy that there are millions of people hooked into it already and utterly convinced of its moral superiority despite the fact that nearly every MMO in existence now charges more for less than in years past?

Don’t get me wrong here; I am a fan of capitalism, and I realize that businesses exist to make money. But Lo Zito’s insinuation that game journos need to be educated about free-to-play is the worst sort of spin designed to capture more of the low-information crowd. It implies an ignorance, an incorrectness in games media where none actually exists, and it is carefully constructed to paint the speaker and those who share his subjective and self-serving notions on free-to-play as progressive truth-tellers while erroneously portraying opponents as uninformed and in need of insight.

Over here in the real and PR-free world, my F2P insight came not from the mouth of a free-to-play game developer with a vested interest in the model but from actual experience. Since 2011, I’ve watched said model actively destroy the sorts of MMORPGs that I enjoy. Free-to-play has enabled widespread game tourism, which undermines virtual world communities and facilitates the kind of short-attention-span MMO player who bunny hops from one launch to the next, never staying long enough to infuse a given game with the personality and the gameplay pulse it needs to be truly alive.

Free-to-play costs completists more per month because now in addition to paying the “optional” subscription fee, they get nickel-and-dimed for every little fluff pet, inventory slot, weapon skin, and cosmetic outfit in the game instead of, you know, earning said items through the gameplay that they’re already paying to access. This, as I mentioned last week, is a godsend for developers with dollar signs in their eyes and a deal-breaker for those of us who value immersion and virtual worlds.

So come on, PR ladies and gentlemen. Try a little harder than “game journos need some F2P insight.” It may come as a shock to you, but some of us simply don’t like free-to-play because it sucks, for the reasons I’ve listed above and for countless others.

Are we a minority? Undoubtedly, but acting like some sort of free-to-play evangelist who’s trying his best to convert the unwashed masses is exactly the sort of smarmy, duplicitous behavior that has earned free-to-play the bad reputation that it carries today and that it will carry into the future.

thatchefdude Sorenthaz Yikes, those are our prices in Canada. I can’t afford them now!

John Smedley was evangelizing on F2P as far back as 2005, as they took the subscription money from the recently released EQ2 to fund Free Realms rather than marketing against the also-recent competitor Warcraft.  From interviews, I don’t think he ever considered trying to compete.  Amazing that the guy is still there.
Seeing the conversion of long-running subscription-based games to F2P, the player service is so much worse, even with the same team.

syberghost Eiroks I liked Swtor.  Was fun having a character that wasn’t a brick wall most of the time.  That and the lightsaber high really doesn’t run out either unless you’re a jaded fan I suppose.  But everything i say is personal opinion unless I back it up with stats, which i won’t cuz few are looking for that.  I did start out the sentence with think in there so please don’t quote me out of context.

Traditionally I stayed away from f2p games when subscription used to equate quality. Unfortunately the first f2p game I played was AA and the extended alpha was a blast I found a great guild and we were having a ton of fun. Sadly the fun quickly declined and when trino released the rumbling trees into the cash shop and negated all our hard work then pile on all the other stuf… My guild, my new friends all quit playing and there was/is just to much negative aspects for me to play solo. AA/trino killed my desire to play any MMO let alone a f2p one.

RLW_316 Emmanuel Carabott I understand EvE perfectly fine, at least I hope I do, Played for like 5 years. Thing is yes in your particular scenario there is very little money can do but its a very specific scenario that isnt likely to happen. For starters I am sure event people will bottomless pockets arent going to spend a ton of money on something before they get to know it a little bit and more then that no one is going to make an enemy they hate enough for this to even be a factor. This will not start being an issue until 3 – 6 months into the game at which point in time unless that person made really bad choices they’ll have enough skill to be in a position where they can do real damage.

Then there is the back bone that drives EvE itself. 0.0 Wars and control of wormhole space. Ownership of these is often proportional to your fleet size. It may not guarantee you can conquer everything or that you can defend against any attack but there is no doubt in my mind if in your corp there are a couple of players who can instantly replace anything they loose not to mention keep far more ships then the average person in reserve at these strategic locations because of the extra money they put in the game it will definitely help.

Finally I want to point out my argument again just so I am not misunderstood. I am not saying RMT definitely makes EVE online pay to win. Like I said thats subjective and like you pointed out yourself there are many other factors that come to play. All I am saying is that real money here gives a far bigger advantage then an XP booster gives yet in my experiance far more people point at XP booster and call that P2W then people point at EVE alright where you can essentially convert $15 into 8-9 battleships or anything else you can buy with 900m isk. from where I stand I see 900m isk a bigger advantage then $15 worth of XP boosts. A much bigger advantage to be honest. Yet generally players consider $15 worth of XP boosters to be the real bigger advantage based on the reaction one sees when F2P model is discussed. I merely disagree with that notion and provided I am right (I may be wrong after perhaps $15 of XP boosts do provide a bigger advantage) the only thing that could explain that is bias towards F2P.

Eiroks you say “was a bad game” like it isn’t one of the top five MMORPGs currently in every meaningful metric; number of players, number of subscribers, total revenues, average revenue per user; the game is a massive success, right now today.

thatchefdude Lethality I believe current WS sub estimates are something like 40k or less based on the Q1 report.

Even as someone who believes in the free-to-play business model, what that guy said, is grade-A bullshit. What he purposes is placing energy gates and money gates to force people to pay, which is what drive people away from these games in the first place. Funny how the most successful free-to-play games use these tactics very sparingly (and even then they’re more like turnstiles than gates), if they use them at all.
Furthermore, the guy doesn’t even address one of the biggest problems of free-to-play that plagues even those who use good monetisation tactics; community toxicity. When anyone can get in, and not fear banning cause they can just go and make an alternate account, how do you make sure the community is a safe and fun place for everyone involved? (I probably should look at kids MMOs like Wizard 101 to see how they handle it.)

Lo Zito is an idiot.

“the equivalent of buying a mop and some Ajax from the guy who purposefully crapped on your kitchen floor so you’d need to buy the mop and the Ajax.”