One of the stranger Final Fantasy tropes is that the more powerful a summoned creature is, the longer it would take for any given game to play its animation. By the time I left the series around Final Fantasy X, summons were getting ridiculously long (like, make yourself lunch and go to the bathroom long). I can only imagine how patient that Reader Jay Bird had to be when he pulled the following whopper out of his pocket.

OK, so it’s a boss, but still. Jay says, “Tonight my Free Company in Final Fantasy XIV took down Twintania, the final boss of the First Coil of Bahamut. This was a huge achievement for us, and afterward we were all treated to this beautiful money shot in front of the head of Bahamut. We must have spent about 20 minutes taking screenshots in there.”

Selfies in front of good-looking corpses — this is why funeral homes don’t allow gamers. But we allow it, so head on in to this week’s collection of player screenies! 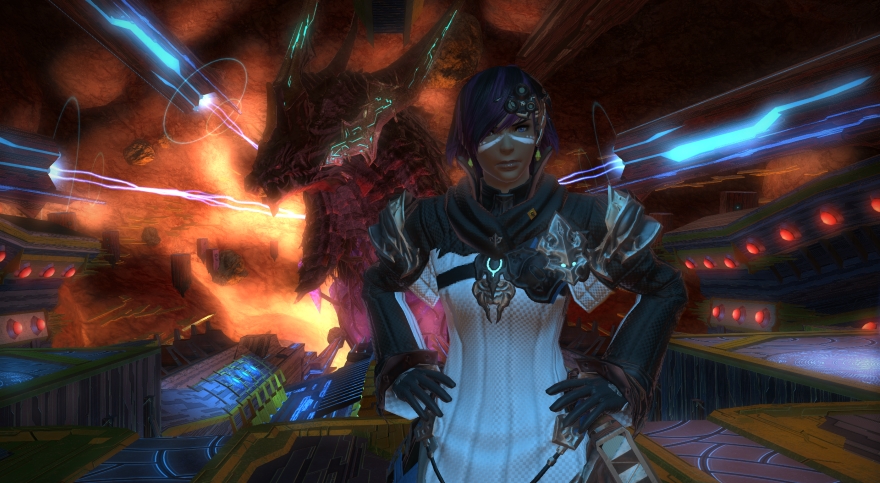 Speaking of selfies, just because you want to take a picture of your character doesn’t mean that it has to be the same-old “stand in front of scenery” pose. Why not spice things up with an emote or ability, as did reader Siphaed here in Guild Wars 2?

“Magic is art,” he submitted. “Video games have magic. So video games are art? Of course they are! I snagged this screen while fiddling with my spells in the Mists while waiting for a PvP match to pop. My scepter may not be a legendary, but I personally think it is far better than the weather-man’s microphone (Meteorlogicus).” 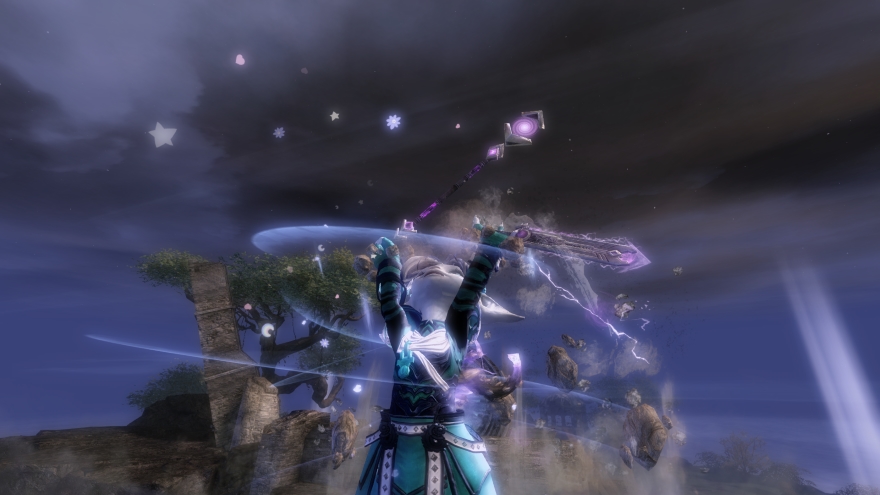 Alternatively, you could show your character from the rear. Maybe you miss out on showing off your face and fancy threads, but this familiar angle serves to pull players in to share the game journey with you.

“I took this picture over The Secret World’s Double AP weekend,” reader Derrick said. “Here I had to follow Tango, one of the scrapyard dogs, to sniff out the source of some noise at the airport.”

And then he was never heard from again. Derrick, not the dog. Dogs are protected by video game law.

When the tables are turned with games leering at players, is the end of the world far behind?

Reader Pashgan found out the hard way that wearing skimpy outfits could attract the wrong kind of subroutine: “This Skyforge NPC was distracted by my female model’s features to the point where he could not maintain eye contact during the conversation.” 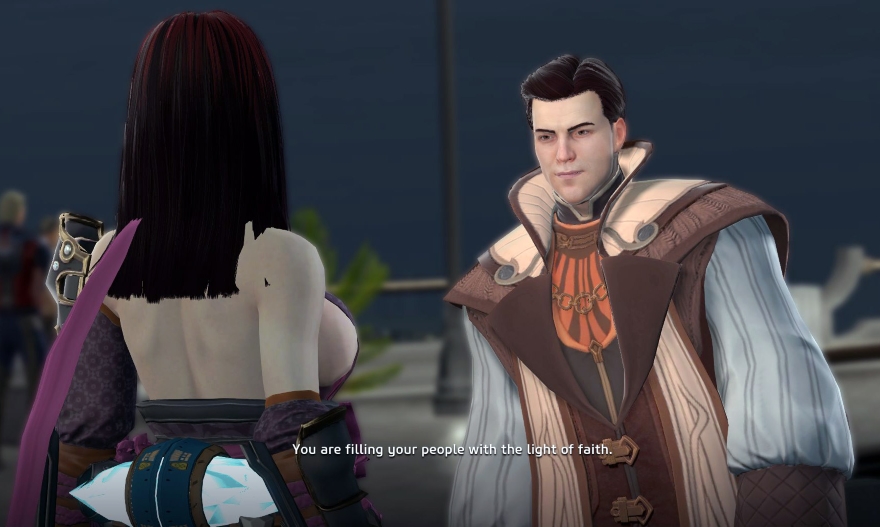 When all else fails, throw a sunset and starfield into the background for a classic yet breathtaking picture.

Reader Wild Abyss wins this week’s It Came from the Comments Section! pick for this extraordinary shot of a shoreline and a Draenei in World of Warcraft. “Just because space goats and space ships and pretty landscapes,” Wild commented. 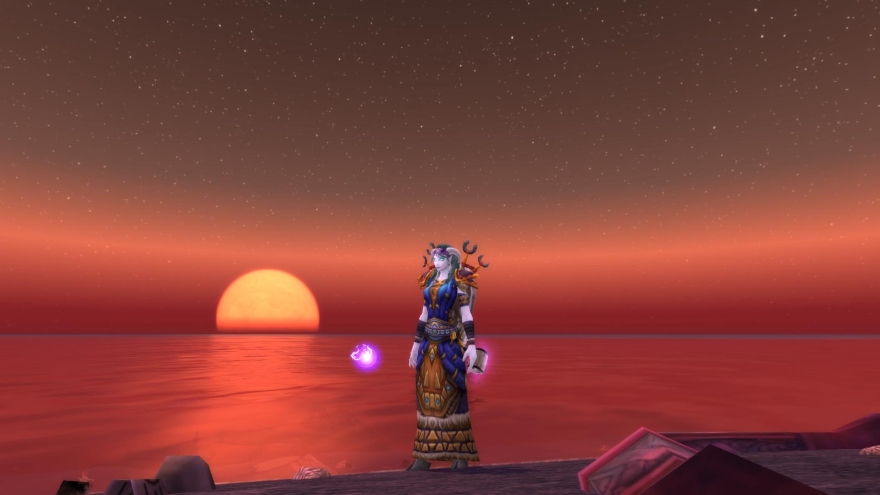 I’m willing to bet that many of you, like I, take screenshots of odd little details that you happen to notice in the game. While the overall picture may not be grand, I’d still be interested in seeing them and hearing your observations!

I find it difficult to take good pics of my little guy. The camera isn’t centered on him. I think it is aimed at a default point meant to work better for the taller characters. I can usually only take decent pics from a low angle

zyrusticae I understand where you’re coming form with character creation. I have to believe my character is really “me” to be able to invest in her. So, yes, I spend a ridiculous amount of time in character creation, and will often smite my poor characters for the slightest blemish (harder to do at level cap, but I still do it!).

As for the sexualised clothing, I take the “long view”: video games are obviously only just emerging from an era where they have been almost exclusively the purview of males. Give it another 10 or 20 years – or maybe 50 if you’re pessimistic – and things should start balancing themselves. It’s frustrating to see the obvious obstacles and inequities reflected in the options we have available, I agree: which is why it’s important to encourage female participation in game development where we can. Sadly, real changes might not be realised in gaming until our children’s generation matures.

And with that pic, I now want to abandon my dragoon plans and be a summoner. I keep going back and forth. Summons were always my favorite part of FF.

wolfyseyes I don’t know about that either, but I’ve felt like I was having a spiritual experience when confronted with a particularly large pair.

eLdritchMD BigAngryPlays wolfyseyes As much as I love pizza and burgers and fried food, I am forever disgusted by the amount of waste and gluttony when I see things like this. That Man vs Food show pisses me off to no end.

Some random recent moments playing FFXIV. My wife started playing as well a short time ago, and we end up just sitting in random places from time to time chatting with others in the FC, and when we’re not doing that we’re obviously goofing off like she is with her chocobo.

The two action shots turned out a lot better than I thought. I really enjoy the music and setting in the Keeper of the Lake when going up against Midgardsormr, and between dodging all the AoE attacks I managed to snag a few interesting shots, with the one here being the most interesting. That last action shot, on the other hand? I actually don’t remember taking it and couldn’t tell you what we were fighting, except that it was somewhere in Syrcus Tower. Love the chaotic mess of it, though.