The dust hasn’t even settled from H1Z1’s recent base-building update, and already Producer Steve George has revealed to us at E3 2015 another great construction-related feature that will be hitting in the coming weeks. What could be better than the watchtowers and foundation expansions that were just added to the game? How about a way to easily store, manage, and use the resources to make said towers! George introduced the concept of construction boxes, a secure container with a special interface that can be dropped at a construction site and used to build the the walls, doors, and other components neccessary for a base. These boxes go well beyond the current storage containers and will streamline and improve the constructon process.

Much more than storage

Why would players need/want construction boxes when storage containers already exist in game? George shared a few very good reasons. For one, these boxes will be secure — padlocked, if you will. Current containers can be opened and looted by anyone, but the new boxes are planned to be be usable only by the owner’s group and those who are given permission to access it. That last part is significant because it means friends will not have to wait until the box’s owner is physically online and grouped to continue base-building activities. How will it work? George told me, “We’re doing some enhancements to the grouping system to accommodate for that sort of thing.” This will be a huge boon to cooperative building. 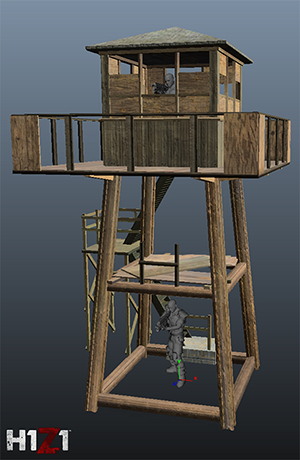 The second significant feature of these boxes is the ability to hold large quantities of building materials (and only building materials) in one place. George acknowledge that although he plays a lot, he doesn’t do too much base building in-game because you have to invest so much time in inventory management. As it is now, you have to have everything you need for your recipe either in your inventory or in the storage container you have open. You won’t even know whether you have enough to build with or what you are missing until you try an individual recipe. Then, if you are missing any components, you may have to rummage though multiple boxes to find what you need. The construction box streamlines this part by keeping all building materials in one convenient spot. But it gets even better than that!

The next feature George described is a special menu on the box that will show players everything that can be constructed with the materials that are present in it. “You will always have a good view of what you can build,” he explained. Players can then just click that item to create it, place it, and then make then next. Each time materials are used, the box will recalculate what it has available and adjust the options accordingly.

Another construction-related topic George discussed was how choosing pre-apocalypse professions can impact building. For instance, if a player were to select at character creation that she was a carpenter, she’d have a slight bonus when it comes to constructing material, such as a faster build timer.

When it comes to building, George emphasized that this isn’t all she wrote on the topic (even if it is all I get to write right now). The skills, the construction boxes, and many other construction-related updates — like the already announced catwalks and machine gun turrets — are in the works to make bases and base construction a more enjoyable experience for players.

I bought this game and Ark during the Steam Sale. I already have Rust, 7 Days to Die, Project Zomboid, Minecraft.

This is a great development.  I have been playing H1 since release and recently came back after an extended break. (3-4 weeks)  I just started building another base for my clan to just get some experience with the building system and I gotta say right now it is pretty annoying.  This update is definitely needed however I hope they are looking at more of the building system as it needs some more work imo.

The biggest issue is not being able to snap certain pieces together based on different reasons.  They really need to work on more of a modular system, IMO, so that there is more customization options for the builder.  This update I think will help the overall building process not to mention the new items you can place seem pretty awesome.

It’s a step in the right direction for sure, I just hope they are still looking into more changes to the building system which I think they need and they did mention earlier in the year that it will all be redone.  Hopefully this is the start of that rework but it is quite exciting and I’m looking forward to the upcoming patches.

Will have to go farm up some more scrap and sheet metal in preperations for this!