After covering the development of Ubisoft’s The Division since 2013, I finally got my hands on the game itself — and its PvP — at this year’s E3. It’s not exactly a true MMO, but it’s got online co-op, , and an “end of the world” setting free of zombies, all of which should translate to hype. [Apparently that tablet app has been canceled as confirmed earlier today.] New details on the Dark Zone may have scared some people off, but my interest was piqued.

For my part, I’m a big fan of organic, open-world PvP; instanced PvP doesn’t do much for me unless it’s about more than just accruing points or climbing ranks or even loot. Unfortunately, the Ubisoft PR rep at E3 began the demo by telling the participants our objective was to kill the other teams in a 3v3v3 “match.” Up until that point, I hadn’t realized that Dark Zone was being billed as an arena for loot gain. In fact, the official description of the demo implied a much more free-form experience.

“In our booth, teams of players will enter from three different routes. Their mission is the same: be the first to find and extract loot. However on their way to extraction, they will encounter factions. They may also meet other teams and choose to collaborate, or turn against them. The first team that reaches the extraction zone, calls upon the helicopter, and successfully extracts the loot, wins. However, only one team at a time can summon a helicopter and during that 90 second waiting period, the other teams may decide to attack and steal your team’s loot.” -The Division’s E3 2015 General Q&A

The live version, on the other hand, is being sold as a place you go to for the best loot at the risk of death by player. Had demo players been given the chance, we might have preferred to let one group or player take their loot and evacuate just to see what would happen, then duke it out to see if anyone else could leave. But as it was, we didn’t really get to experience Dark Zone; we just got to kill each other. Ah well.

My character turned out to be “the shotgun guy,” as I was lovingly called. My teammates were a medic and a sniper. The sniper’s role and kit were fairy standard; I don’t recall anything special about them. (This was not a press-only demo, so I had no time to take notes during gameplay; all recording, including my usual audio recording, was banned.) The medic had a med pack that could be used to either heal people near her or could be thrown as almost a healing turret. I, as “shotgun guy,” had an actual turret that did the opposite of healing (and to the other team only). The medic and I also had a special skill that allowed us to reveal nearby hostiles to our team, which came in handy several times and may have been the only reason I was able to get any kills (I’m not the best at shooters with a controller). 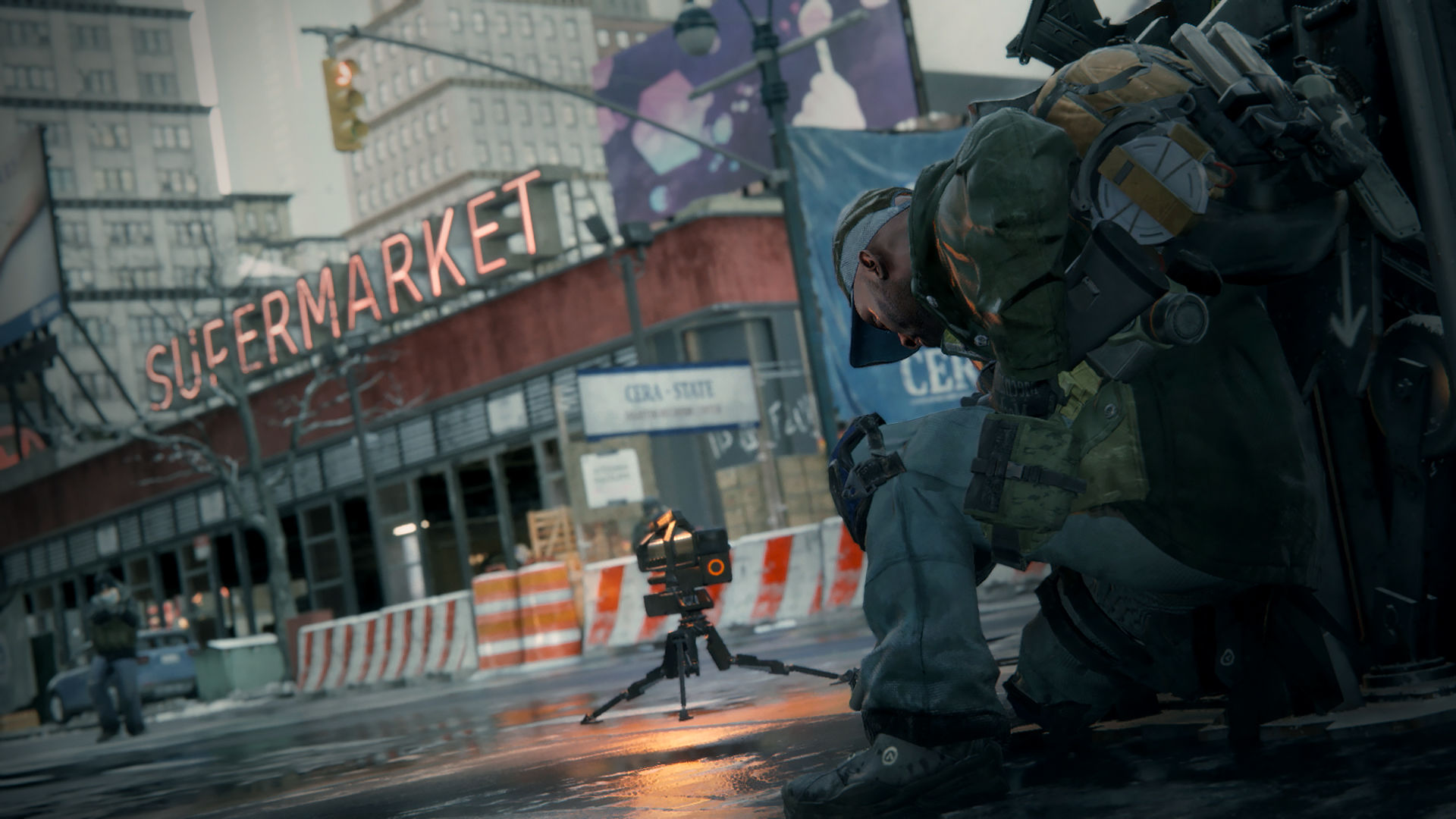 The demo dumped us off in front of a group of mobs that were dispatched faster than I could form an opinion about them, and we never saw more mobs after that. We simply killed them, took the loot, and found other players to fight. It was quite an underwhelming feeling. I understand this was a demo, but the PvE and PvP mix felt unbalanced. Earlier that day, I previewed Star Wars Battlefront and found non-PvP objectives to deal with in order to help the team (though I may have also used a tie-fighter to smoosh a guy I just couldn’t hit). The Dark Zone gave me none of this. Though my turret did get a few kills with the help of my hostile-revealing special, I was mostly killing people.

That isn’t to say there was no other objective. Escape was the ultimate objective, but as I had lost my loot, I was told I was unable to initiate the escape procedure. Someone on the other team had beaten us to that, but perhaps because we were pushed to fight, it didn’t happen until the demo was more than half over. We tried to locate and kill that person, as initiating the evacuation order makes you a target to everyone in the zone not on your team, but it just didn’t happen. The demo ended before the fight or evacuation could be resolved.

The game’s cover system worked well enough, and the use of terrain was fairly intelligent; if it looked as if I could climb it or hide behind it, I could. Rather than dying immediately, my allies and I would go into a weakened state, akin to the downed stated Guild Wars 2 from which others can revive you. You can’t fight back, but you can crawl around. When you die, you can respawn, but it felt like respawning took longer as the game went on and/or as I racked up deaths of my own, which is a bit MOBA-like. I’d heard respawning changes after the evacuation, but I didn’t get to see that in action. And while I’d read about the game’s gestures, I forgot about them entirely once we encountered the other team, whose members immediately open fired on us.

Essentially, it felt like a fairly generic lobby shooter experience. The game felt polished enough, but without context, and without the option to choose to work together with my fellow players, the demo fell flat. This isn’t to say I’ve lost my interest in the game, but it does remind me why I’m hesitant about PvP “options” in instanced situations where your reputation can’t follow you. If players aren’t punished across instances for going rogue, the Dark Zone may end up also falling flat, resulting in wasted developer time on a potentially interesting mechanic being boiled down to a run, gun, and respawn formula we’ve seen a thousand times since the genre’s birth. But until we’ve seen a whole lot more, we’ll have to wait to draw any final conclusions.