When Perfect World and Runic Games announced last week that Torchlight was stretching out into the mobile market, it caught many folks quite unawares. (It’s not often a studio can keep something under wraps so well in this industry!) So of course I was looking forward to meeting with these studios at E3 2015 to learn more about this little surprise. What I didn’t expect was to get my hands on a nearly completed version of the game and test it out!

Before I delve into my experience, I must preface this hands-on with the confession that with the exception of Fruit Ninja, I have never played — nor even been interested in playing — any mobile game. Well, unless Tetris counts! I am very much a PC gamer who wants the more in-depth worlds and experiences that come with that platform. That means I definitely have no bias toward or inclination to favor this genre of game. With that said, you can better appreciate this statement: I might very well start playing Torchlight Mobile on my own device when it launches!

Honestly, I did not go into my interview with Runic’s CEO Max Schaefer with any expectations. Perhaps that is why I was so blown away by what I was shown. For starters, Torchlight Mobile is not a new concept that will soon begin development. No, I had a working build in my hands. In fact, I was playing a brand-new iteration that was just released. And the graphics! I freely admit that I can be a graphics snob, and I was thoroughly impressed with the quality and crispness of the visuals. I have no way to compare it to other mobile games, but everything was so clear and impressive that I wanted to run around everywhere and see everything. 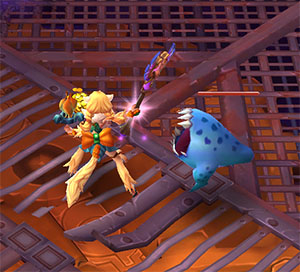 Oh, and it needs to be known that this game has what is now my favorite mob of all time! With no official name, I have dubbed these guys sharkpoles, as they look like a tiny blue pollywogs (aka tadpoles) with stubby little legs and a big shark mouth filled with sharp teeth. It is cuteness overload. If they ever make plushies of this thing, I will go broke buying them all up. In fact, Mo really needs one! (We must make this happen.) I even had trouble killing these little bugger ads they gnawed on my ankles they were so darn adorable, but my pet panda kept dispatching them even when I wouldn’t.

One of the first things emphasized is that this mobile game is not a watered-down version of the original Torchlight or even a port of any kind. It is its very own standalone game that complements the popular ARPG. It is set in a new part of the same world, not a part already existing in the current games. It also has new playable races and classes (my favorite was the magic-flinging, cat-like Kitsume). While there are some mobs that will be recognizable, such as the tentacles, many more will be new. This is because mobs can’t be as modeled the same for PC as it is for mobile; mobile doesn’t have the same capacity for thousands of details. However, the mobs still look quite good, and my only complaint is that I didn’t get to see the final dragon boss in person!

The game has a customizable skill system players can change out to fit a situation or playstyle, though I mainly played on a new character and then a max-level character with its skills already pre-selected, so I didn’t experience this system myself. I did, however, experience the end result, actually using them, and that was really easy to do so even for a mobile-novice like myself. In fact, the whole interface was simple, clean, and easy to navigate, with additional information available at a touch. Items and weaponry can also be upgraded through play by way of gems slots and such.

When I played, I tested out three different classes — a sword-carrying warrior, a flame-thrower-toting engineer, and a staff-wielding spell caster — all cognates of the classes from the original game. I explored a bit of the town (there’s plenty of places to poke into) and went out on a few quests at various difficulty levels. Arenas for PvP were not yet available to try, and this newest build for E3 did not have other folks online to check out multiplayer content. Even so, I might have played longer that I anticipated… all in the interest of gleaning more information for you, really!

Each quest is designed to run for three to ten minutes so players don’t have to be tethered to a wall by a power cord to play. That doesn’t mean folks can’t hunker down for a marathon gaming session, but plenty can be completed in shorter bursts of time. Each quest, however, has a stamina cost to enter, so long sessions may be out of the question if the player runs low. It should be noted that health does not replenish naturally during the quest, even when out of combat. External items are necessary for replenishment.

Quests can also be done cooperatively, though I didn’t have the chance to try. However, there is definitely no trinity; there isn’t even a healer type. Instead, all classes really look after themselves. This is so all players can play perfectly fine solo. Of course some players may find group tactics — utilizing skills on concert with one another for bigger benefits — an exciting area to explore.

OK, so maybe fishing shouldn’t really have its own section since it isn’t a huge part of the game, but the fact that you can do this simple little minigame in ponds even in the mobile edition is still neat. And fishing has a purpose: Some of the fish you catch are magical and allow you to transform your pet into something else temporarily. My first fish allowed me to turn my panda into an eagle.

Speaking of pets, all players get a pet when they start the game. Some classes get other pets in time; for instance, the Engineer I played had a giant mechanical bodyguard and a little whirlygig. In total, there are more than 25 pets in game.

A great thing Torchlight Mobile has going for itself is that it appeals to many groups, from Torchlight fans to those who’ve never played the original games (like me) and from mobile veterans to total newbs (me again). As to the former statement, you don’t have to be a Torchlight player to jump in and enjoy this game. However, for those who are long-time fans, Schaefer pointed out that there will be plenty of references that die-hard fans will get as well as lore and mechanics that will be familiar. Shaefer added, “The art style, the sound, the combat simplicity — stuff like that — is all vintage Torchlight.” 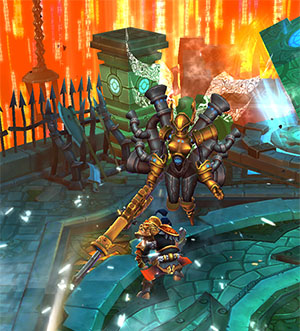 As to the latter, the game is easy to get into, has smooth controls, and looks gorgeous. It also satisfies those urges for a gaming quick-fix while on the go. Just be warned that you might lose track of time and miss your stop if you play on a bus or something while commuting!

Another thing that might appeal to folks is the fact that this free-to-play game is working to avoid pay-to-win with its microtransactions. Yes, yes, all games say that, but here is how Torchlight Mobile is planning to make that statement reality: The cash shop is filled with convenience items like health potions, stamina, and resurrection items. The resurrection items are very much for convenience’s sake, since if you die during a quest, you are sent back to the main hub and have to start all over. Health potions, on the other hand, can be farmed in game, and mobs sometimes drop little orbs of health that can be utilized during battle. Items of power like weapons and such will not be found in the shop. Players will have to go out and get that as loot out in the world.

The game will come out Q4 2015 on Android and iOS, though other platforms may follow later. Hopefully that means so those like yours truly who have a Windows tablet may be able to also get in on the action. Schaefer expects the mobile version to expand the fan base of Torchlight beyond those who have already played; after all, mobile is a completely different audience from PC gamers. However, he also emphasized that those who play on the PC also have phones and may dip into this new Torchlight world. He added that while a good hack-and-slash on mobile “is sort of a Holy Grail right now,” getting an ARPG to feel right if you haven’t made one before is quite difficult. Luckily for us, these folks have made several.