END_OF_DOCUMENT_TOKEN_TO_BE_REPLACED
There are certain phrases you really want to be able to use but don’t expect to in a first impressions piece. That headline is one of them.

I will freely admit that I have not seen every scrap of content in Heavensward yet. I will also freely admit that I’m predisposed to like the game and the expansion; this has been one of my biggest games over the past year, it’s a game that’s brought a lot of good stuff into my life, and I have a lot invested in it.

And for all those caveats, this is still one of the best expansions that I’ve ever seen. It manages to expand an existing game beyond its previous limits without making the past entirely irrelevant. It isn’t perfect, and there are certainly weaknesses and oversights, but as an addition designed to expand the game as a whole rather than just a tacked-on new dimension, it may as well be.

In many ways, Final Fantasy XIV has been sitting on this particular time bomb since its initial launch. There are four major city-states in Eorzea, but while the lands around Ishgard have been open to players since launch, Ishgard itself has always remained sealed and inaccessible. Players knew that eventually, the doors would have to open, so the question was when.

And, you know, what would be behind the doors when we entered.

The push that finally brings players in is the main story, one that ended in brutal fashion with the game’s last major patch. Several people died, organizations fell, and rather than marching in as conquering heroes to save Ishgard from their long war with dragons, players instead slink in with no further allies. The story and the quests do a good job of establishing this fact, as well: While you’re not starting on the very bottom, you quickly discover that you are in a situation that is not just dangerous but actively precarious, with enemies on all sides and an ongoing war that poses as much danger to you as to the inhabitants of Ishgard.

Yes, it’s an MMO story, and just as in the base game, the story doesn’t give much space for the player to choose how things unfold. It’s filled with both lore about the setting and a compelling cast, however. While the base game’s story had a large number of characters already in place, the team was free with this expansion to have a more active cast, move around who was where and doing what, and give everyone a fresh set of motivations and goals.

You can complain, of course, about having a story where, yes, the player is a chosen hero and a major mover and shaker. But there’s enough to like here without it: The story is well-told and interesting if you’ve followed the events leading up to this point, and it manages to be ominous without ever slipping into grim bleakness. And there are lingering touches, things that you realize belatedly were seeded ages ago, like an important development that was foreshadowed back before players had even started dealing with the Ishgardian conflicts. (I’ll not spoil it; you don’t need to remember the seeds to appreciate it.)

But if that doesn’t do it for you, that’s also fine because as always there’s more to do. There are new dungeons to take on, new primal fights to learn, new areas to work through. There’s the new and expanded Hunt system, which actually makes for a nicely satisfying chunk of experience on a daily basis as you fly about and look for targets.

Oh, yes, the flight. That’s a thing, now, and it’s set up to perfectly answer questions about how to make flying relevant, interesting, and worthwhile when you could theoretically never touch the ground again. To start with, flight is not simply a matter of learning a skill but a matter of unlocking the ability: The flight-enabled zones require you to seek out and attune to several wind currents, earning the right to fly in that region. These currents are locked behind some quests and some exploration, which has prompted more than a few people to complain that flight is useless once you get it because you’ve already explored the entire area. 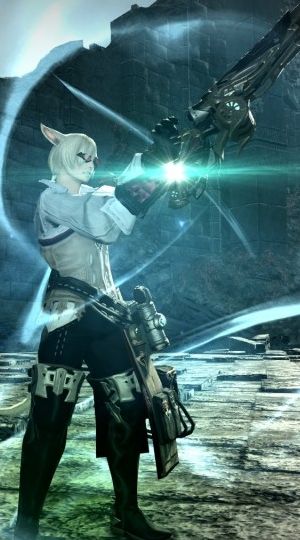 But that’s not true. Once you can fly, you can access areas that were previously unreachable, and new quest chains open up in later levels that require you to fly through the areas where you once walked. Even when you’re just clearing out the rest of your sidequests, you benefit from being able to fly. Your exploration of the zone seems quite thorough by the time you unlock flight, and yet it actually leaves you with even more to explore, more to do, more to spot.

This also nicely allows future zones to feature or not feature flying without feeling unfair. It ensures that flight need not be a “default” feature of future expansions while allowing it if desired. It’s elegant, satisfying, and rewarding, even if it does get a bit annoying to pace on the ground and find routes when you know flight is easier.

And that’s not even getting into the fact that players have access to three new jobs within Ishgard, one for each role in the game. Astrologian, Dark Knight, and Machinist all have a great deal of visual charm, and while at their starting levels they can feel a touch overpowered, by the time they get in step with other jobs, they’re balanced for smart play. I’ve played more with Dark Knight and Machinist than Astrologian, but all three feel satisfying, with Machinist pushing that “ranged support damage” angle hard and Dark Knight capturing the sort of devil-may-care attitude that the name would imply.

And as always, the old world is neither irrelevant nor forgotten. Quests bring you back to the pre-50 areas, Poetics upgrades remain relevant for a long while, and new options make running through content or leveling up alts that much easier.

There are issues, but most of the design issues come down to nitpicking. The lack of any new content from levels 30-50 is felt keenly when the new jobs force you to downgrade aggressively; while the leveling speed for these jobs is accelerated if you have a job already at 50 (which you must to unlock them), it’s a bit irksome to have to downgrade right as the expansion kicks off. No, there probably wasn’t time to add in a whole new cluster of things to do at level 30 with the existing design time of the expansion, but that doesn’t make it less irksome; it just puts that irritation into context.

Little issues crop up elsewhere, as well. There’s no clear demarcation of quests that require flying and those that don’t in later zones; early zones don’t have flight-only quests until long after you will have acquired your attunement, but later zones can be a bit opaque on the matter. The first couple of dungeons can be a bit bland in terms of mechanics. Leves are a bit further off the beaten path. Yes, they’re all minor issues, but they’re still irritating and prevent the expansion from being entirely perfect.

More prominent is the simple issue of server stability, which, bluntly, has been hit-and-miss at best during early access. The official response is essentially “be patient and let the problem fix itself,” which is less than useless, and the process is frustrating for the players eager to get into the game and take part in the expansion. One can’t ignore the launch environment when considering the expansion; unless something radically changes between the time of this writing and the official launch, it’s unlikely that the problem will actually be fixed or even painted over.

And that’s a shame because once you get past those login issues, you’re rewarded with an expansion that’s nearly perfect. I can’t in good conscience say that it does reach that lofty height; there are too many little issues that I can point out to say with certainty “yes, it’s absolutely the tops.” But it does so much right, and with login issues resolved, it’ll be hard to find fault with the game that doesn’t devolve into nitpicking.

I’m predisposed to like Heavensward. But I’m also predisposed to like it because it does everything it’s setting out to do with panache, grace, and beauty. The game could have delivered an expansion that was purely by the numbers, but the end result is all that and more. It’s a gem, and while it’s not absolutely perfect, I’m hard-pressed to think of a single expansion in memory that did it better.