Bethesda, the parent company of ZeniMax Online studios, had an amazing showing at E3 this year, but unfortunately, no one from the Elder Scrolls Online team was there to talk about anything that was happening with the game despite the console launch landing literally the week before. I don’t want to speculate on how much Bethsoft actually cares for the game — and maybe they’re all too busy working on the launch — but I am quite disheartened that there was no presence at all.

I guess I can be happy that we did get a fly-by trailer and some never-before-seen images of Orsinium. And we did get a tease of the Dark Brotherhood at the very end of the trailer. Unfortunately, it was a tease similar to one we saw about a year ago. Don’t get me wrong; I’m truly excited to see the Imperial City and all the rest coming to the game; I’d just like to have seen more than a couple of fly-bys.

Still, that doesn’t mean that they aren’t important to Elder Scrolls legends or the story of ESO. So let’s discuss everything we saw in the ESO E3 trailer.

A history of Orsinium

We should first dive into a little bit of the history of Orsinium, a place that we’ve actually seen only once in the history of the long series of Elder Scrolls games. It appeared in Daggerfall with extremely dated graphical quality by modern standards. And given what we can do today with gaming environments, I think it’s clear that whatever Elder Scrolls Online gives us, it will look nothing like its incarnation in Daggerfall. But there is another reason that Orsinium might have major physical differences in ESO, and to unwrap that, we have to understand where Orsinium fits in the history of Tamriel.

In the Pocket Guide to the Empire, 3rd Edition, a physical booklet that came with the collector’s edition of Oblivion, Orsinium is described as a dream. It reads, “For most of the past two thousand years Orsinium has existed only in the dreams of the Orc people.” This is because over the centuries, the Orsimer have not only been an independent sort of people but been seen as mere savages by the other races. When Orcs would gather in great numbers, the other races, particularly the Bretons and Redguards, would do whatever they could to break the resolve of the Orsimer people.

However, in the First Era, sometime before 950, Orc Chieftain Torug gro-Igron founded a settlement just outside the Wrothgarian Mountains. History called it nothing more than a series of huts, but word spread quickly of an Orc settlement in High Rock. Orcs from Daggerfall, Skyrim, Hammerfell, and many of the other provinces of Tamriel built this small arrangement of huts into the giant stronghold of Orsinium, making what was once a dream a physical reality.

Because the other races, especially the nobility of the Bretons, considered the ways of the Orcs to be brutish and uncivilized, they formed a pact to bring down this great city of Orcish resolve. One would think that a “savage” fortress would fall quickly to the massive army of the Bretons, the Redguards, and the Yokudan Order of Diagna, but that’s not what happened. For 30 years, the races of Daggerfall and Hammerfell pushed unsuccessfully against the walls of the fortress of Orsinium, until in 980, those walls did eventually come down, and the Orcs were once again scattered to the winds.

For over two thousand years, there was no record of Orsinium ever existing again. However, there is a book in the Elder Scrolls Online about the Royal House of King Eamond that mentions a sacking of Orsinium during 2E 431. This only goes to show that despite all its attempts, Osimer society will not never live in peace with the other races. But that doesn’t mean it won’t try.

That leads us to the present day in The Elder Scrolls Online‘s timeline. With a promise to restore the great Orc city of Orsinium, High King Emeric of High Rock convinced the Orcs to join the Daggerfall Covenant, one of the key player factions in the game. Many Elder Scrolls fans have issue with what they see as the bending of Tamriel history, but truthfully, the history of this time is spotty at best. It’s completely possible that Emeric sees the greater good of having Orcs as his allies — or maybe he has a more nefarious, hidden agenda.

Regardless, the call has gone out to the Orcs of Tamriel to return home to Orsinium. A letter found in Elder Scrolls Online reads, “Yes! Once more the City of Orcs on the escarpment between upper and lower Wrothgar stands tall and proud! Behind its legendary iron-capped walls, tuskers of every clan work to restore our capital — your capital! — to its former glory.” King Kurog wants all fellow Orcs to be united once again in relative peace.

Unfortunately, we know that even this Orsinium will eventually fall. In the Third Era, far from ESO’s time, Gortwog gro-Nagorm acquires the site of the great city to rebuild it. But until the great Orc city crumbles to the ground yet again, we can raise a flagon of Bog-Iron Ale to its glory and majesty. 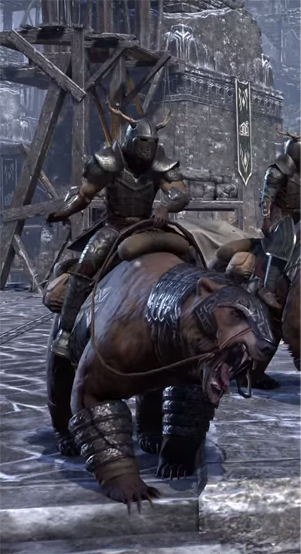 At the end of the E3 trailer, we see two Orcs riding what looks to be bears. That’s right: bears. Admittedly, the spectacle made me giggle because of the internet memes that surround everyone from Batman to Vladimir Putin riding on the back of a bear. However, it now appears that this will actually be a thing that your character will be able to do in ESO.

What’s more interesting is that this actually falls in line with Elder Scrolls lore — and I don’t mean through crazy mods that you created for Skyrim. In ESO, a book titled The Rise of Queen Ayrenn reads, “Much has been made of our Queen’s adventures in Tamriel by bards and common broadsheet scribes. Yes, it’s true that she once rode a bear.” Initially, this book could be read as an exaggeration to make the Queen of the Summerset Isle to be larger than life, but after seeing this trailer, I think it’s completely possible that this tale is true. And you might be able to ride a bear yourself.

Of course, the initial speculation is that that a bear mount will be a Crown Store item. This might discourage people from actually buying the mount, but seriously, who doesn’t want to ride a bear?

A quick word about the Dark Brotherhood

Look for a deeper breakdown of the Dark Brotherhood in a future Tamriel Infinium article. I’m certainly looking forward to seeing what ZeniMax has planned for the guild of assassins.

Thanks for taking the time to do the history lesson!

CrowingOne EatCandy Styopa The only thing sadder than TESO devs not showing up was the crowd’s less than enthusiastic applause. lol

Um, Zenimax Media is the parent company of both Bethesda and Zenima Online Studios.

When content for PC finally begins to be a focus I may look back toward this game.

It’s because there is nothing to play on next gen consoles! The only thing that has close to a unique experience is the Wiiu and that basically failed despite how amazing the games are.

I remember about this time last year people were saying gw2 is dead. This game is fine, it wasn’t on sale during steams summer event, they have 2 major content updates coming and the console launch is still getting ironed out.
This time next year they will announce an expansion and the world will keep turning. Everybody praying for its demise should probably move on to STO, EQ2 or TSW because those games are in far worse shape.

I don’t think people realize how popular the console version of the game is, they had to focus on the console launch.  Looking at the unique visitors to Elderscrollsonline.com compared to other MMOs, and even compared to itself during PC launch is pretty amazing.  ESO’s interest during console launch completely blows away PC launch.

Now the question is can they keep a lot of these console players.  That will be a hard task.

Pretty hard not to take it as a message when NOBODY from the game’s at E3.

While, yeah, it’s CONCEIVABLE that they were “all working on the release”, we all know that the marketing drones have little/nothing to do with coding or content, so ….yeah, there’s that.