As you’ve all heard by now, MMO giant Wargaming announced a reboot of the classic game Master of Orion during this year’s E3. The company might be known best for its free-to-play war franchises, but it actually started out as a single-player strategy game company with the Massive Assault games, which makes it uniquely equipped to handle this franchise. The original MOO (yes, even the Wargaming team affectionately says “moo” when discussing the game) is a strategic, turn-based RPG from 1993 that gave rise to the 4X genre and phrase: eXplore, eXpand, eXploit, eXterminate. You play the commander of one one of 10 races in a galaxy of other civilizations leaving their homeworlds to conquer the stars. But across the franchise (there were three games in the original series), players aren’t just asked to blast their enemies; they win through a point system that covers everything from, yes, raw power, but also things like research and diplomacy.

That means every decision you make affects the rest of your gameplay. The presenters described a diplomacy scene in which a race of spymasters, the Darlock (whom I really wish I had a picture of!), wanted access to our warp gates, which are used to quickly travel through the galaxy (moving takes up part of your turn, so warp gates can really save you some turns). Doing so meant giving spies access to our nation, which might turn out to be the wrong call in the end. However, I was unable to see how exactly it played out; I was part of the very first group to see MOO on the very first day of E3, so I got to experience some of little bugs and rough spots in the presentation first hand. 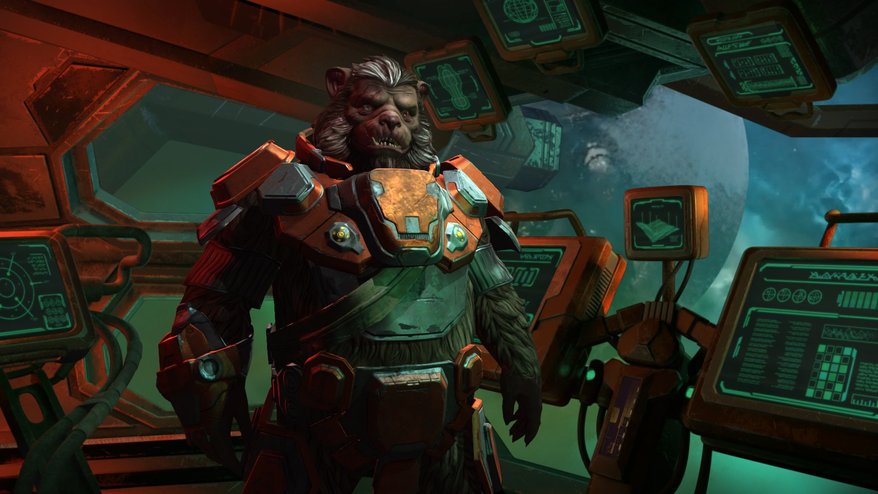 Free of nostalgia, my immediate impression was that this was looking pretty cool for a strategy game in an alpha state. I really enjoyed the art direction and models, and the scripted voice acting is the right balance between professional and hammy. It’ll be a PC downloadable game at launch (but not free to play, sorry!), though it may find it’s way to other platforms. The focus, for now though, is just on PC.

So why is an MMO website covering it? Multiplayer and beyond. We’re an MMO site that covers some not-so-massively games, and we were specially invited to see a demo of single-player game with multiplayer, but we don’t know much more about that aspect of the game other than that “it’s coming.” Will it be massively? We don’t know that either. Wargaming just isn’t talking details about multiplayer yet.

Our demo was quite pressed for time, but Jake Neri, publishing producer at Wargaming, was able to get back to us about a few things we weren’t able to discuss at the actual event. I asked him specifically about the US playerbase in World of Tanks specifically and the general sentiment that the Russian playerbase takes precedence over the rest of the audience. Neri told me,

First and foremost we want US players to know that we have heard this concern and that we are aware some people think this is the case. It is important however that the community know that this is not true.

The other factor at play here is that because the game originated in Belarus, and was widely adopted in Russia earlier than anywhere else in the world it can feel like that audience is being favored. However our US teams are in daily communication with development and we work to bring feedback, requests, and concerns to the team. Rest assured that there is a healthy line of communication and we are working hard to make sure WoT is a game that players from all corners of the globe can enjoy.

For the US based World of Tanks PC tanker, we’ve been delivering new and cool offerings. Like introducing really exciting game events like Rally Mode, Winter Showdown, and the ongoing Domination mode which is a fast paced Capture the Flag with respawns and repair stations.

As a Nintendo fan, I can certainly share the feeling of being ignored as a “foreign” fan, but I also understand a company’s attempts at making overseas fans feel valued. That’s why I was curious about the team’s use of crossovers. For example, in Japan, we had World of Tanks do a cross-over with an anime called Girls und Panzer, which actually got some people interested in the game (including one of my students!). In the states, you got a bit of a cross promotion effort with the movie Fury. Neri said there was a really positive reaction from fans, so while there are no current plans in the works for other crossover events (that he’ll talk about), “never say never.”

Finally, for those curious about the removal of three-player flights from World of Warplanes, know that the change was made to improve battle balance. Apparently the changes have been well received by the community. When I asked whether the team is considering adding new game modes, Neri said that they are a priority for the company and that the studio is “looking into several options for prototyping and testing.”

Massively Overpowered was on the ground in Los Angeles, California, for E3 2015, bringing you expert MMO coverage from NCsoft, Blizzard, Ubisoft, BioWare, and everything else on display at the expo!
Advertisement

Mad props for the well written Babylon 5 intro reference. I can’t believe I’m the first to comment on it!

If this turns out well maybe they can go for a Master of Magic reboot as well.

Galatea Boardwalker  My friend at the time had an Apple II back then and owned that game. And yeah, I believe that was the early 80s as well. Good times.

AxiomXIII Gavin_Lafferty I spent ages waiting for MOO3 and when I finally got it after so much anticipation I spent the first session in that awkward place…the one where you try to convince yourself a turd is not a turd.

I did ONE playthrough of that game.

Gavin_Lafferty I always felt that Galactic Civilizations success was owed in part to it similarity to Master of Orion 2, which many felt was a far superior game to MoO3. MoO3 was disappointed so many fans who really just wanted a bigger, updated version of the second game.

Having more gaming options is good. Play both games!

I was there at the dawning of the third age of Masters of Orion, seven years after the game’s Antaren war. MOO3 was a dream given form, it’s goal was to present the greatest 4x based strategy game of all time. It was a place we would call home, for our diplomats, our entrepreneurs and our wanderers. We could play as Humans and Aliens in a game that was several hundred megs in size.

But in the year of the 4x space game we found something greater. Galactic Civilizations was a cheaper, simpler and vastly superior game.

It spawned an even better sequel.

And it again has spawned an excellent 4x title in the form of Galactic Civilizations 3.

Masters of Orion had it’s shot and it has been spiritually succeeded. They have the right to try again and I hope it succeeds for nostalgia’s sake, but nostalgia is currently it’s biggest selling point.

Jacobin I picked up SD2 on release and well it was pretty bad.. they had basically removed everything that was good about the first game and left you with an average 4x game but with super hard A.I. that could throw wave after wave of full fleets at you by the time you have managed to build a few ships..
I think they have managed to fix that now but still at release is was pretty bad.

Book of Travels will now hit early access on October 11:...