When you construct your buildings out of pixels and polygons, you don’t necessarily have to worry about what’s physically possible and what isn’t, just what looks interesting and believable. I always check out the structures that developers come up with because there are always artistic architectural details that often go unnoticed.

Reader Zepheera saw something special in this Dungeons and Dragons Online view: “I’ve always loved the way the enchanted pylons float under the harbor inn. It’s subtle magic; there’s practicality, though it’s more for effect and might escape someone’s notice the first time. It makes me think if I could really be a wizard, I might go into city planning.” 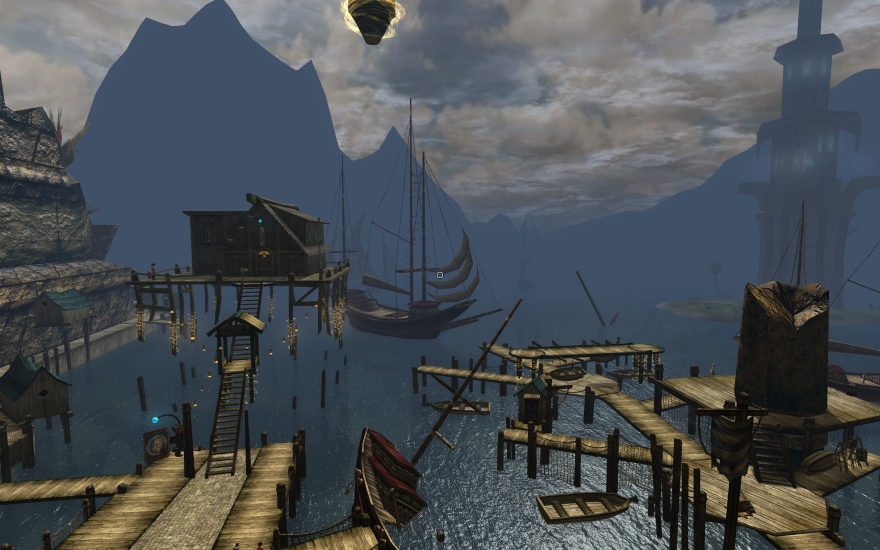 “I probably spend more time killing mobs to get a good view for screenshots than I do actually playing, so much of my time in The Secret World is spent marvelling at the scenery,” reader Wild writes. “Here’s a great shot of unrest in Egypt, probably spurred on by the traitorous full moon. I had just arrived from New England, and this new landscape was both suddenly alien and utterly beautiful. Even the bloodshed.” 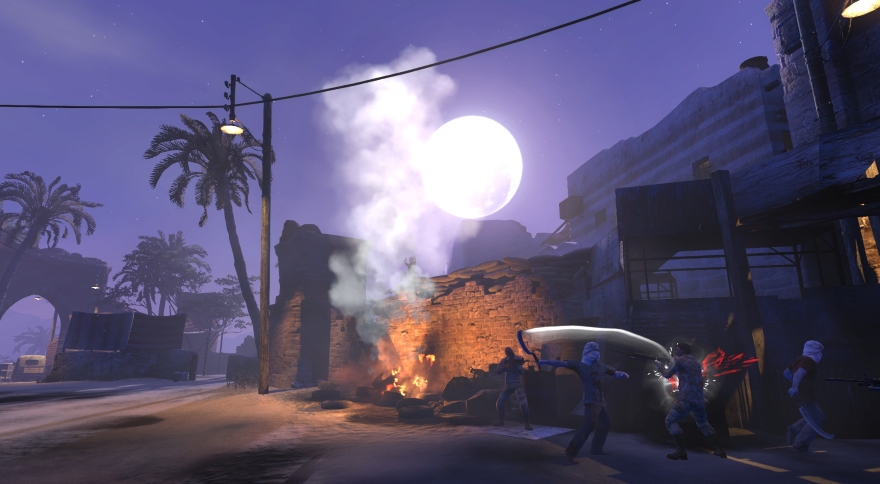 Ralph the Wonder Llama has this trip down memory lane for us: “One thing I’ve always appreciated about Guild Wars is how it made maximum use of the PvE content in the game. No matter how far you got, there were always reasons to go back and revisit old missions. So after finishing the Prophecies, Factions, and Nightfall campaigns in Guild Wars, I turned my attention to some of the spiffy titles I could earn for my characters. In this screenshot, my party had just completed the bonus mission for Hell’s Precipice, earning me the ‘Protector of Tyria’ title. Astute readers will note the Factions armor on my Warrior and the Nightfall heroes in the party. Yes, it had been a while since I last visited my old stomping grounds. But it was still just as challenging as I remember!” 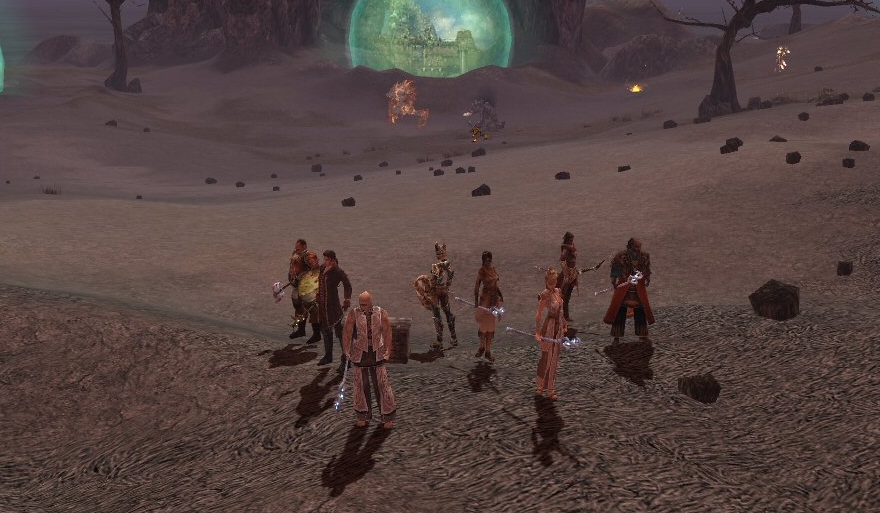 Giant snowglobes always demand an explanation. This one is no different.

“This one is of a piece of an EverQuest II housing decoration that is earned from one of the main adventuring quests in the Altar of Malice expansion,” submits reader Ohnix. “It is a fully animated globe that has ships, sea serpent, storms, base and even the compass (on top) rotating at different rates. I have it placed on the dock in one of my characters’ personal island housing areas. The housing objects are scalable, but at normal scale, it is about the height of two tall humans.” 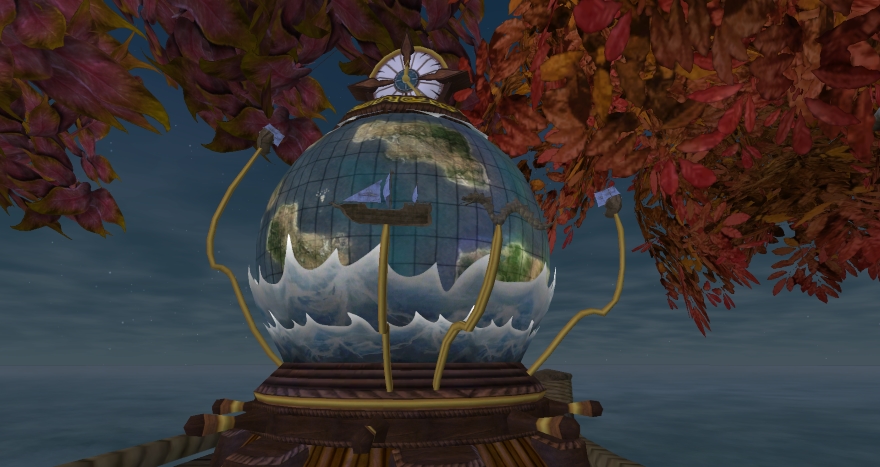 A while back I asked for readers to submit something… ugly. Boy howdy, did Camelotcrusade answer that call with this week’s It Came from the Comments! pick.

“Ugly, huh?” he wrote. “It’s been years, but I remember this EQII instance where you have to run from a tunneling monster that devours you if you’re too slow. Said monster turned out to be a naked mole rat, and I made it my business to possess it and turn it into my pet. I had to be very fast to possess it before it ran off the cliff at the end of the chase, not to mention have enough lead time to avoid being eaten. Eventually I succeeded, and to my surprise it didn’t retain its size when converted to my pet. I don’t have a character in the pic for scale, but it was roughly cat-sized. But is it ugly, or beautiful, or both? The ground texture, now that’s ugly.” 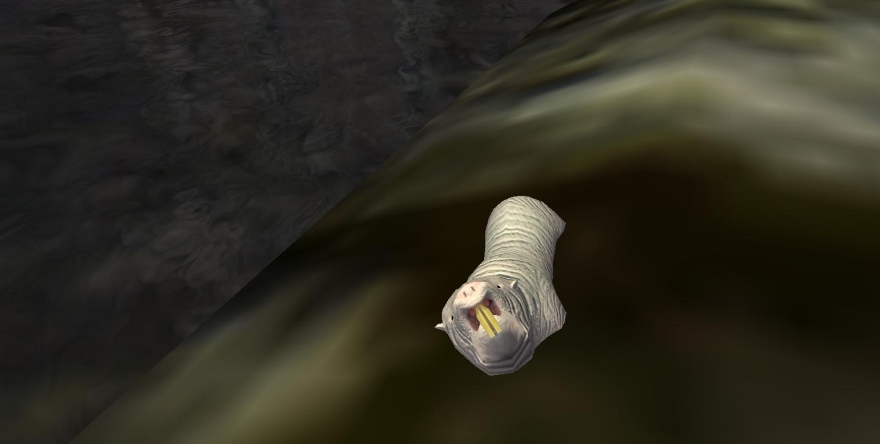 I think that’s my new avatar.

So for this week’s screenshot challenge, send in a picture of you and your mount doing something reckless and crazy. I don’t think I need to give you any specific instructions here; you’re all quite bright. Get it done!

Hmm, silly mount stuff.  Looking through my archives, I hardly ever took pics while on my mount (despite collecting dozens of mounts across many games).  But then, I’m one of those people who dismounts immediately when I don’t need it.  I suppose I prefer to walk.  :)

This doesn’t really count, but there was that time I was “mounted” on the hover disk in the Kingdom of Sky (in EQ2) — it takes you between the floating islands.  Except… I wasn’t.  Bugged graphics had me running on air, and this was well before flying mounts were in the game.  Maybe it was a prophecy of things to come.  Either way, I got a kick out of watching my character run through the air.

oo spooky, a mount doing something reckless and crazy. i spent yesterday in TSW breaking physics in agartha on my motorbike. i was both on the top branch and at the bottom at the same time, much to the confusion of Jennet streaming it

deekay_zero  I am looking forward to playing WS again…you guys looked happily baked :) I think it it Wonderful when I hear about guildies meeting up!…and I’ve spent the better part of the past week working on a rather large and elaborate fire pit area from all the rock that was dug up while setting up our new well…I cannot wait to have my first fire going..ty for the pics!

Hub’s carnotaurus, Mossfang, looking all proud about having his picture taken.

SkipE that is awesome and I am glad that wasn’t me I would probably had a heart attack or at least pooped (um in game of course :-P  )

“You Lookin’ At Me Lookin’ At You.” Pretty much the last thing you want to see looking around through your telescope in Ark.

Liandreth Female Orcs look so awesome after their update! I mean, I liked them before, except maybe for the old hair textures.

Liandreth Really impressive with what Blizzard done to an 11 year old game with those new models.