The most recent updates are toward the bottom of this post. This article is still being updated as of July 12th.

Daybreak is currently suffering an apparent DDoS attack. Daybreak President John Smedley tweeted about the attack earlier this afternoon, suggesting the ensuing outage would be a brief one, but that hasn’t been the case.

Getting a minor DDOS. We're working on it. should be back up soon. #annoying

Tweets on the studio’s official account confirmed connection issues with all of the studios’ MMOs and websites. As of press time tonight (9:30 p.m. EDT), Daybreak has no ETA for the restoration of services.

We are currently investigating reported issues with connectivity both in-game and on our websites/forums. Thank you for your patience.

We are working to resolve the current connectivity issues. Thank you for your continued patience.

All games, websites, and forums are still impacted. We do not have an ETA for when services will be restored.

Smed’s been in the news this week following the sentencing of 17-year-old Lizard Squad member Julius “zeekill” Kivimaki in the first of many planned Finnish prosecutions for Kivimaki’s hacking, swatting, and credit card fraud crimes. Kivimaki is further accused of executing the bomb threat that diverted Smedley’s plane last August as well as targeted attacks on the PlayStation Network over Christmas. The Daybreak President has been outspoken about Kivimaki’s sentence, explaining to players on Reddit his frustration with the ongoing harassment he’s suffered from Kivimaki and Lizard Squad since last year.

It is not immediately clear whether Lizard Squad is responsible for the ongoing outages, though this is probably a good clue: 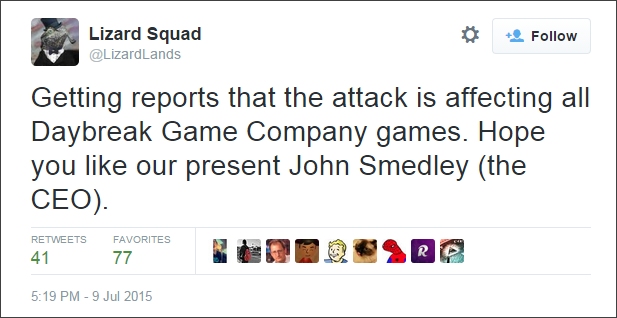 Source: Twitter. With thanks to Andy, Styopa, and iamstillwater.

We are experiencing issues again which may result in lag, disconnects, or inability to access games, forums, or websites. The team is aware.

looks like we are getting hit again. Sorry folks.

We are continuing to resolve issues from a Distributed Denial of Service event. We will provide updates as available.

And sorry to say more DDOS. I apologize for the issues we are having. I have to own pissing them off and I'm sorry.

Just sorry they are taking it out on you, our players.

He also addressed player complaints about his conduct:

@not_Reiko apologizing to you not them :)

@jonAKAVinny @H1Z1game actually they've don't this off and on without me saying a word.

@jamesbs1017 they've done it quite a bit. We just don't talk about it.

Durenas SalmanAhmed1 He may not be responsible, but he is definitely culpable.  Had he not tweeted what he did, its extremely unlikely LS would have done what they did.  And its unlikely that you could say a reasonable person would do what he did.

That doesn’t absolve LS from their actions, far from it.  Those guys are the criminals here.  While what Smed did gives him some level of culpability here, it seems way to large a jump to call Smed’s actions criminal.

jackinthegreen Celebeth because for some reason you need him to validate your opinion.

Celebeth jackinthegreen I don’t want to continue to much more with this but seeing as you brought it up .

What am I supposed to think if you are making comments based on something I have written where it quite obvious you have failed to absorb and made assumptions.  Its annoying to say the least .

Also you have done it again . I did not call him a narcissist  I pointed out is is considered by psychologists as when someone refers to themselves in the third person an indication of a narcissistic personality . There is a huge difference ! why am I having to point to out to you a second time ?

Robert80 jackinthegreen Celebeth If you care to look in my last post I requested we return to the subject at hand Robert . In making such a post it seems to me that you are only perpetuating it even though I know its not your intent .

jackinthegreen Celebeth  No, both of you have crossed the line.  You both went into insults, instead of merely debating.
It is well beyond the point where you both should have merely agreed to disagree.  Please just stop already.
*If it continues, Moderation requested.*

jackinthegreen Celebeth my stance on the topic can be found hidden somewhere in the 404 comments. Google will be your friend, since you asked me to use it, I’m sure you know how it works.

“Madda considers it not to be a serious crime where as I do.” That is your only worthy contribution in the topic itself. Narcissism has nothing to do with this topic. Calling someone a narcissist is a personal attack, just as much as calling someone an idiot, or calling someone a “little slow on the uptake” as you called me.

Celebeth jackinthegreen Calling someone an idiot would be a personal attack . Pointing out that if someone fails to absorb what is written shows a sign of a lack of intelligence is a correct observation .

And yes the topic at had is the DDOS attack but if you care to read this thread you will see how it still is on topic .

Madda considers it not to be a serious crime where as I do .

So far you have not mentioned your stance on the DDOS attacks maybe you care to enlighten us so we can get back onto the topic as you so obviously desire .

jackinthegreen Celebeth You are right on the money that I have no interest in the subject of narcissism, although not for the reason you already provided. I asked you one simple question and you failed to answer it.

It’s quite funny that in a topic that’s basically about morals (Internet crime versus big-mouthing people), you need to resort to personal attacks.

No psychologist would dare throwing out diagnosis, but you did, and for that I dubbed you a world-class psychologist. If you aren’t one, then perhaps you should know your place, and stop diagnosing people over the Internet.

The topic at hand: “Daybreak games slammed with DDoS attack.”

What I said “because you seem a little slow on the uptake) is “referring to yourself in the third person is considered by psychologists as a symptom of Narcissism”.

I know this because I studied psychology at university .

Its not my diagnoses its the diagnosis of many top psychologists .

Here is a link on the subject if you are interested further ( you probably wont be because I doubt you have an inquiring mind ) .

If you care to google the subject you will see plenty of other articles about it .