END_OF_DOCUMENT_TOKEN_TO_BE_REPLACED
Welcome ladies, gentlemen, and small furry creatures from Alpha Centauri to the second installment of Choose My Adventure: Final Fantasy XIV Heavensward edition. Last week, I asked you all to vote on my character’s race and class. The results of the racial vote were fairly unsurprising, with the newly added Au Ra pulling in about 41% of the votes. Of the two Au Ra subraces, though, the Xaela came in with a commanding lead of 24% of the votes against Raen’s 17%.

The contest for my class, however, was a good deal closer. Machinist came last with 30% of the votes, with Dark Knight in a close second with 33%. The winner, with 37% of the votes, was the healing class, Astrologian. So without further ado, ladies and gentlemen, it’s my pleasure to introduce you to Qala’to, the Xaela Au Ra Astrologian with a Miqo’te name because, sorry, I’m not paying 10 bucks for a name change. So how have my adventures gone since I first entered the gates of snowy Ishgard and set out on my first outings as an Astrologian?

Well, let’s start with Ishgard: Holy hell, it’s pretty. Like seriously, guys, look at this place. Look at it! The soaring spires, the wonderful views overlooking the powdery-white fields of Coerthas, the imposing statues — all of it lends the city a sense of awe-inspiring grandeur more-than-befitting the home of ancient noble houses, the Church of the Holy See, and the honorable and dignified order of Temple Knights. On top of that, it’s remarkably well laid-out. 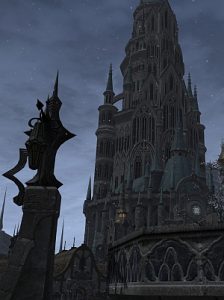 As I gushed about how omgawesome the city is to Massively OP’s own Eliot Lefebvre, he noted how wonderfully Ishgard breaks the mold of capital city layouts compared to other games, which have an alarming predilection for slapping a bunch of stuff in a circle and calling it a day, and I’m certainly inclined to agree. Everything in Ishgard is conveniently accessible, and the city itself is easily navigable, but it doesn’t sacrifice a sense of immersive realism to accomplish that. That is to say, Ishgard feels to me like a city should, as if it truly is inhabited by an entire population going about daily life. It’s not just a hub for players in a video game.

But enough about Ishgard. What about the Astrologian? Well, although my current experience with the class is limited to a handful of quests and a smattering of dungeons, so far it honestly doesn’t seem all that different from my “main” class, the White Mage. Astrologians begin at level 30, so I have access to a pretty solid array of abilities from the get-go, most of which are familiar to me in function, if not in name, due to parallels to White Mage spells. For instance, my basic healing spells, Benefic I and Benefic II, echo the White Mage’s Cure I and Cure II, while Helios, an AoE group heal, works exactly like the White Mage’s Medica spell. As far as debuff removal is concerned, the Astrologian’s Exalted Detriment performs just like the White Mage’s Esuna.

However, that’s not to say that the Astrologian doesn’t come with a few nifty tricks of its own. Another of my starting spells, Essential Dignity, is an instant-cast heal that restores more HP depending on the target’s remaining health, so it’s considerably more powerful on low-health targets, therefore making it a rather useful oh-shit button. On top of that, I’ve got a buff called Lightspeed, which does more or less just what you’d expect: It decreases the cast time of my spells at the cost of a small debuff to spell power. 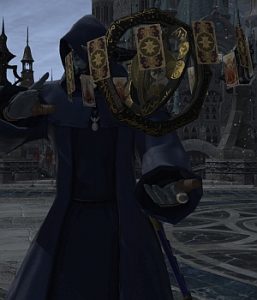 But the Astrologian’s deck of divining cards is the real draw — pun absolutely intended — of the class, and I have to say I rather like the mechanic as well as the flavor. Essentially, each time you use the Draw ability, you select a card from the deck at random. There are six different cards, each with its own effect. The Spear, for instance, reduces the target’s ability cooldowns, making it perfect for helping the group’s DPS beat the ever-loving daylights out of your enemies, while The Bole reduces the target’s damage taken, which makes keeping the tank alive a bit easier. My personal favorite, unsurprisingly, is The Ewer, which reduces spell mana cost for the target, which in this case is always me because more mana for the healer means less dying for everyone else.

Although I’ve yet to unlock the abilities that let me get a bit fancier with my card tricks by setting aside certain cards for later use, reshuffling unwanted draws back into the deck, and so on, I really enjoy the balancing act of making sure that my group’s health is kept up while also doling out buffs to the appropriate targets, and I can’t wait to see what kind of an effect that has on the class’s complexity as I level up.

But the question is: How I should go about leveling? And that’s where you come in, my lovely readers. Should I take my new Astrologian dungeon-delving and plumb the depths of Eorzea’s darkest, dankest, and most dangerous environs? Or perhaps I should stick to the open land and make my way through the ranks by way of quests, leves, and FATEs. Maybe the more sadistic of you would rather toss me into the lion’s — pardon me, the Wolves’ — Den to test my mettle in PvP combat. Yes, I know, PvP isn’t an efficient way to level and I’ll probably have to supplement it with some dungeons, FATEs, and leves anyway, but hey, it’s your call, not mine!

So what’s it gonna be? Be sure to get your votes in before the polls close on Friday, July 24th at 11:59 p.m. As usual, be sure to check in next week when I’ll be revealing the results and updating you on my (mis)adventures. Until then, friends!

Sythalin
Hey, it worked for Catakiddies! >.>
…um…jk!
But yeah, either I am going to pull my pigtails out and knuckle down with one character. Or find another game to play if I can’t commit. I think it boils down this with this game. And depending how one looks at it, it could be a good or bad thing, depending what you want to do. So I am not even sure there’s room to complain. :)

Sythalin ManastuUtakata
I was more hoping they would of significantly of sped up the jumping through the hoops process for us who are stuck at low levels, but I knew that would of been too good to be true. :(
…either way, thanks for explaining that!

Are you going to be streaming this?

wolfyseyes I should have added “all of the above” as an option, but since enough people in the comments seem to be asking for it, I’ll focus primarily on whatever wins the vote, but I’ll also make sure to do a bit of everything else, too, just for you guys. :3

Sythalin Hahaha, I’m so sorry! I didn’t realize it was such a sore spot for Astrologians. Please forgive me, senpai! <3

BalsBigBrother Don’t be too disappointed! I’ll be giving y’all the option to change up my class in a future article. :)

Sythalin ManastuUtakata Correct! Haha. I debated attempting to haul through the game to level 50 on a new character, but decided that was probably not a good idea. I do value the remaining shreds of my sanity, after all.

*hugs, gifts you with a bitchin’ longcoat and a bottle of Cajun spices*

I always refer to the ASTs I group with as “Gambits”. Never sure if it’s appreciated or not.

Looks like it’s no contest, though I will parrot Triple B in saying that doing a bit of all the things would be a great choice.
I was always curious about the Astrologian. I generally bore with healers, but the cards mechanic seems like it’d be interesting enough to make healing a bit more engaging that “watch healy bars”.