I play a fair amount of single-player stuff when I’m not playing MMOs, and at the risk of outing myself as one of those infernal dudebros, I love the Assassin’s Creed franchise. And I do mean love. I’ve got an Altair poster in my office and an Ezio action figure on my desk. I even own all of the series’ portable and mobile games, the latter of which is firmly against my religion.

I won’t spend a lot of time delving into the series’ gameplay here except to say that it’s an incredibly addictive mixture of platforming, parkour, swordfighting, and collection minigames, with the later installments adding everything from grenades to sailing ships as the historical timeline moves forward.

Visceral combat in the vein of Assassin’s Creed isn’t exactly the MMORPG genre’s forte, but games like TERA and even Age of Conan have proven that stylized action can be done on a massive scale. Parkour might be another matter because thus far few MMOs have attempted it, certainly none to the degree that Assassin’s Creed typically employs. Blade & Soul’s movement system shares some similarities, though, and Black Desert’s purportedly does too, so I wouldn’t assume that it’s impossible.

An Assassin’s Creed MMO might run into trouble when it comes to world size, particularly if the designers are keen to make an open-world game that supports thousands of simultaneous users as opposed to something heavily instanced. And let’s face it, the world and its absurd level of detail — as well as the fact that basically every inch of it can be explored — is a large part of this franchise’s charm. Sure, there’s a story, and it’s got some interesting bits about secret societies, historical figures, and the like, but to use Unity as an example, I’ve already spent over 20 hours in the game since buying it on Steam last week, and I couldn’t tell you the first thing about its narrative other than that my character’s name is Arno.

I spend most of my time prowling the streets of revolution-era Paris, which Ubisoft has apparently recreated with startling accuracy. I kill bad guys, collect cockades and treasure chests, and climb everything from the lowliest shack to the likes of Notre Dame. The sheer size of the city and all of its explorable area is mind-boggling, even though the devs have necessarily downsized from its real-life counterpart (with the exception of the aforementioned Notre Dame and other famous landmarks, which are reproduced in 1:1 scale).

I can only imagine how much fun it would be to explore this place — or the Jerusalem, Venice, Rome, and colonial America of the franchise’s earlier entries — with a group of friends in pursuit of various MMO quest completions and boss kills. Unity offers a bit of a tease in this general direction with its co-op missions, which basically load you and two to four players into instanced sections of the city to complete various assassination or extraction objectives.

The matchmaking is incredibly and tediously broken, at least on my PC version, but the few times that it worked properly did provide me with a good bit of fun and managed to convince me that a full-fledged MMO is something I’d pay a lot of money to experience. 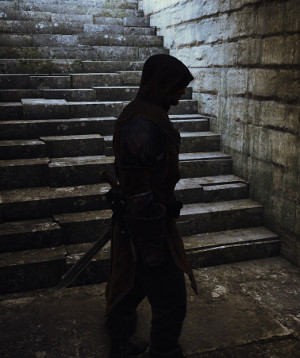 Unity introduced another new franchise wrinkle that got me thinking about an Assassin’s Creed MMO, and that wrinkle is progression. Initially I couldn’t stand it, and I did an expletive-laced double-take when the tutorial popups and early-game missions started talking about character and NPC levels and upgrading my weapons and armor.

I mean, really, Ubi? I play Assassin’s Creed and other action games because they’re action games! I just want to run up walls and sneak up behind people with my hidden blade, thank you very much. When I want to hop on a Progress Quest treadmill and do math, I’ve got 20 million MMO grindparks to choose from. But, this being 2015 and game developers being primarily concerned with developing new ways to separate free-to-play consumers from their money, Assassin’s Creed’s adding a progression grind (and a cash shop to bypass it) was sadly inevitable.

Oddly though, I’m kind of enjoying Unity’s progression, and I typically loathe skinner box stuff because of the way that it sucks up precious hours of my life and rewards me with nothing worth mentioning in return. Here, though, the sizable stable of badass outfit pieces tickles my digital dress-up fancy, and unlike in most MMOs, I can simply grind the money required to buy the pieces by doing what assassins do instead of grinding RNG mob drops and hoping to get what I want. This is the sort of progression I can get behind, especially when taken in measured and mostly optional doses and bookended with the series’ traditional gameplay that I mentioned above.

Finally, I’d like to see an Assassin’s Creed MMO because of the setting — or should I say settings plural. If you’ve never played the series, what follows is something of a mild spoiler, but Assassin’s Creed doesn’t actually take place during the French or American Revolutions or the Crusades or in the upcoming Syndicate’s Victorian England. That stuff all happens in an advanced simulation built in the modern world for the purposes of exploiting genetic memory to discover various secrets about the Assassin order, its Templar enemies, and a vast multigenerational conspiracy of cosmic import.

It’s ultimately a bit of a Matrix/The Secret World mashup, and it’s fertile ground both for those of you who like dev-driven MMO narrative and players like yours truly who prefer to make their own in the context of an immersive world with a thick backstory. If you’re into roleplaying, imagine a canvas that allows you to plausibly interact with 21st century hackers, Age of Sail pirates, or Revolutionary Native Americans, just to name a few. And if you’re not into roleplaying, imagine seeing those eras brought to vivid visual life in a triple-A MMORPG. I’d buy the hell out of that.