Raptr has published its stats roundup for the month of June. It turns out that people are still playing games online. You can close your browser now, and thanks for the pageview.

Oh, you want details? League of Legends is still kicking everyone’s ass. ARK: Survival Evolved debuted in 12th place, and Heroes of the Storm landed in 8th place thanks to its formal launch. In the realm of pure MMOs, World of Warcraft jumped back into the top five in terms of relative playtime share, but its total playtime was down over May — no surprise there. Final Fantasy XIV fell two spots to 15, Star Wars: The Old Republic fell four spots to 18, and Guild Wars 2 dropped out of the top 20 altogether. “Dungeon Fighter Online made a surprise entrance into the top 20,” posts Raptr, crediting the game’s North American open beta.

As usual, this post comes with caveats that you will ignore on your way to shout about this post in the comment section. The stats represent only users of the Raptr service, and percentage playtime is calculated relative to other games, so it is possible for a game to sink in relative rankings while actually improving in overall playtime/players/income/health (and vice versa). Irritatingly, Raptr does not provide complete information on games’ total playtime except for the tidbits it mentions in the body of the article.

The top-20 infographic is below. 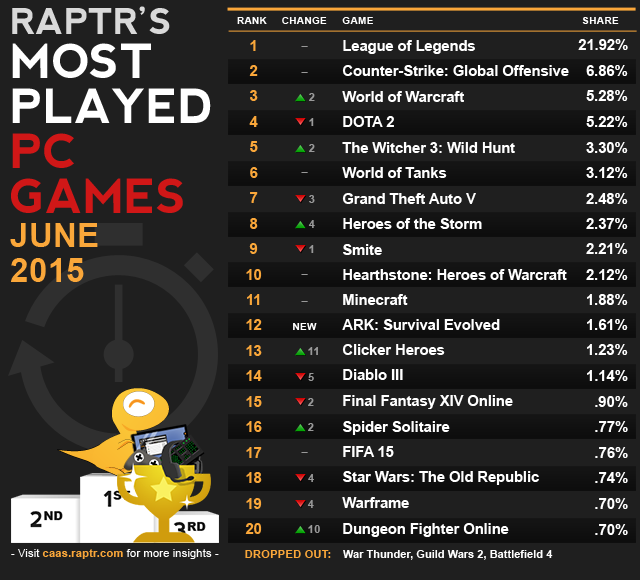 I used Raptr for a while, mostly because I could earn free things in a couple of games I was playing, but once that wasn’t a thing I cared about (aka they stopped giving out items for my games) I realized that there was no need to have it running anymore.  Three years later I haven’t used it, heck I never even installed it on the new PC I built in spring.

All that is representative of is a small proportion of gamers . I personally don’t know any that use it and I know a lot of people in various games .

WoW is the only mmorpg on that list. That says to me people rather play other types of game because frankly, these devs keep failing again and again and again.

Not sure what this proves, lol. I have never even used Raptr before, nor does anyone in my FC in FFXIV uses it. :/

I installed Raptr on my computer and now all of my sound effects are babies crying or animal howls. Is that normal?
Also it’s really cold in my room now and my books keep falling over.

JakeDunnegan SoMuchMass Damonvile I never said PvPers are the core MMO audience.  I said PvP games are extremely popular, most popular games in the world are PvP.  Secondly, there is no way to tell what genre of gamers don’t use Raptr, for all you know there might be a higher concentration of MMO players to MOBA players.

Raptr has never been relevant in my gaming life.