What’s up in The Secret World? I’m glad you asked! If you’re one of those folks who are not-quite-so-patiently awaiting the launch of the next issue, you might be looking for something to help you keep busy until then. I mean, the third anniversary event was a great diversion for a spell, but it has ended, and Issue #12 is still at least a couple weeks away. Thankfully, TSW fans don’t need official events to keep them occupied; plenty of players come forward and run various activities for folks to get involved in. There are contests, dancing, music, roleplay, scavenger hunts, and more. Here’s a smattering of player-run things you can delve into this summer. 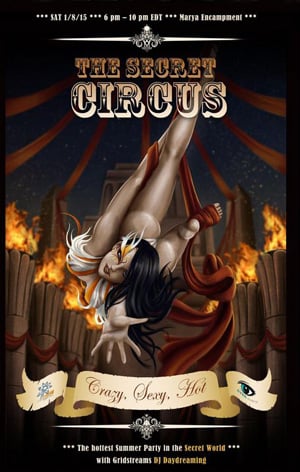 Although Grid Stream Productions has a regular line-up of live DJ-hosted shows paired with in-game parties Thursday though Saturday nights, some special shows are sprinkled throughout the calendar. One such show is the upcoming Secret Circus. Billed as hot, crazy, and sexy, the event will be hosted by Ivy/Ilana Vaklor and DJ Daydreaming. Meet up with these folks for a fun time of music and dancing. Rumor has it this is a party not to miss!

A weekly event hosted by Nine Swords is a roleplay night every Monday in the Tabula Rasa in London. Things start with just hanging out and chatting there in the city, then move to another in-game location to explore, run dungeons, and the like — all in-character. The gathering is open to everyone, new to RP or not.

If you like trivia, fireworks, selfies, flash mobs, prizes, and music, this is the event for you. Katarina1 is hosting a mega third-anniversary celebration in London’s Ealdwic Park, complete with giveaways galore and a live DJ. Using the shoes of synchronicity, players can participate in choreographed dancing or just get down with their bad selves.

What can players win? Three will walk away with 1,200 Funcom Points each, five will win the coveted psychedelic Mythos Machine motorcycle, one will nab a purple signet, and plenty of others will procure emotes, clothes, accessories, pets, titles, and party bags. Katarina1 is also teasing three other huge giveaway prizes that won’t be announced until the conclusion of the event.

Players can join the special chat channel (/chat join #TSW_K1) to keep up with the happenings and meet up on Katerina1 for quick travel to the festivities.

Although this contest is not strictly an in-game event, the inspiration comes from inside the game, so there are plenty of reasons to run around getting ideas (and not a few screenshots!). The prizes for the competition have not yet been announced by the host, the RP club Saints and Sinners, but the theme is Dancing with the Damned. All mediums are welcomed, although screenshots should be manipulated in some artistic way.

Back in February, our very first Chaos Theory on the new site focused on the Cabal Pride Parade that paired cabals (guilds) with new recruits. In September, the same groups that brought you that are bringing another event to do the same. However, this time around it won’t be a parade; it will be a variety show format with each guild taking the stage in London’s Ealdwic park to put on a show aimed at convincing others why they’d want to be in that cabal. For you young whippersnappers who might want ideas for your onstage antics that might be a bit more obscure than the stuff of today, there are a host of television examples to peruse, such as The Muppets, Hee Haw, The Carol Burnett Show, or even The Red Skelton Show.

Following the performances, cabals will stay in the part to talk with recruits while GSP entertains the crowd live. To keep up on the event in game, join the chat channel (/chat join cabalpride).

As there is a fair bit of organization that needs to happen, be sure to contact the host Nine Swords with the requested information if you want to participate.

When: Through the end of July

Here’s one I’m really sad I missed out on and hope comes around again: the Shutterbee Scavenger Hunt. Since this list of activities goes live on the final day of the hunt, it is not very likely that you’ll be able to dive in and get very far if you start today. However, I add it here so that hopefully we can encourage Shutterbee, or anyone else willing to put one on, to do this again — and soon! Heck, I may even do one myself; it’s actually an idea I’ve contemplated many times over on a smaller scale. A Chaos Theory hunt: Who’s in? Hurry and hop on another Shutterbee, before the world is subjected to my crazy ideas!

The whole goal of the hunt is to take screenshots or short gifs of specific things and submit them. Each task is assigned a certain number of points, and whoever collects the highest number of points at the conclusion of the contest wins. Here’s a small sampling of the various images contestants have been tasked with capturing (there are 50 in total):

While some submissions seemed pretty mundane, others just had me laughing. How much fun it would be to see all the various submissions! Well, you can in the contest gallery archive. I think I will run in try to do a few even if I cannot submit them for any prize consideration. If you do as well, please feel free to share.

Of course, this isn’t all you can find to do in game; sometimes folks run spur-of-the-moment events on either a small or a large scale. There are also plenty of events that have come and gone, and more are sure to be scheduled in the future. Do you know about other events happening? Or are you planning something special and want to get the word out? Add upcoming events in the comments below!

Greaterdivinity Awh! To be fair there are a lot of distr…

ChannelOoi What does any of this have to do with player events? :) The player made events coming up will have no Golems and while TSW has a lot of performance issues they’re going to be amazing and you’ll totally miss out if you don’t come! There’s no sub and since you already bought the game come and have fun! :D

Hey there :) Thanks for mentioning the Secret Circus :) Ilana here!
Just two little things:
The event happens from 6-10 om EST. :) You can meet up on LadyDhee (Ilana) or Daydreaming (DJ Daydreaming from Gridstream).
The poster by the way shows a player’s character (Rovena) and was painted by The Harlequin, see here: http://hf-harlequin.tumblr.com/ :)

There’s so much going on all the time over in the TSW RP community — it’s really a great, active, enjoyable group of people.  I’m DJ Daydreaming of GridStream Productions, and I’ll be providing the music and emceeing for ‘The Secret Circus’; I just wanna clarify that the event ENDS at 10pm EST, and begins at 6pm EST.  You can meet-up in game on myself or Ilana – Daydreaming or LadyDhee – and if you’ve got the Marya Encampment anima well, you’ll pop up right there!

I also wanna give a shout-out to the amazing artist who created our event poster – you can find him over at http://hf-harlequin.tumblr.com/ !

Dartflare Yah that event was pretty sweet! Could take up a whole Chaos Theory all on its own =D

ChannelOoi You know The Witcher 3 is a Singleplayer game and TSW is a MMO right?

Came back for the 3rd anniversary :
Weeks of mind numbing pinata spanking
+
Various performance issue with normal non event gameplay on a pc that can run witcher 3 at 60fps
=
Bought Elder Scroll Online collector edition and ffxiv with expansion and 90days sub