Every once in a while I receive a One Shots email that makes one of my eyebrows climb super-high while the other one dives down my forehead. Then I have to go lie down for a while and call a loved one to talk through the confusing image that I saw. This is one such screenshot.

“One of the features in Trove I was really excited to discover was a slash command for time-lapsed screenshots,” reader James explains. “However, in practice I’ve found that the end result isn’t always the action shots during boss fights or shadow arenas that I was looking for. Instead, I often get these abstract images of particle affects. Most of them aren’t worth saving but every now and again I get a screenshot like this one, which I think is quite beautiful.”

Pretty lights. Swirly colors. You like? Be nice. Read on! 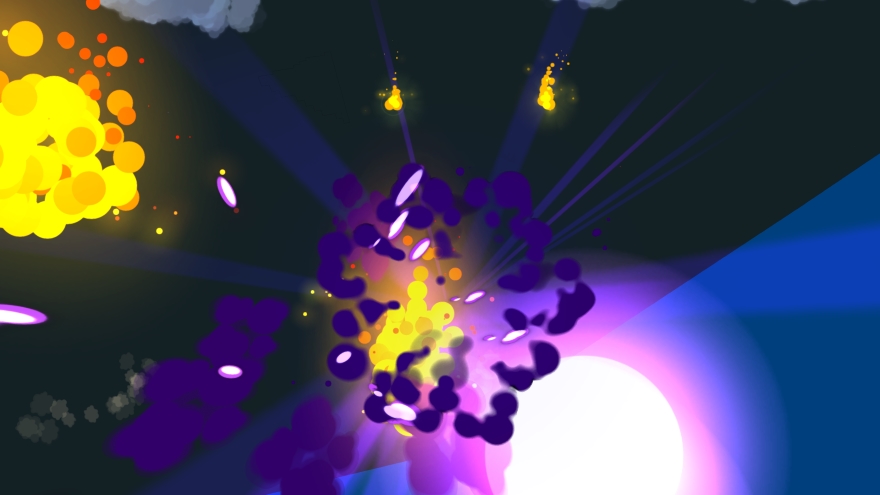 Apart from abstract art particle effects, I continue to be barraged by The Secret World players sending me pictures of their new hogs. I don’t blame them for their enthusiasm; we’ve been waiting a long time to get mounts in this game after all.

This motorcycle pic is from reader Estranged, who sets it against the backdrop of the lighthouse on the Savage Coast. 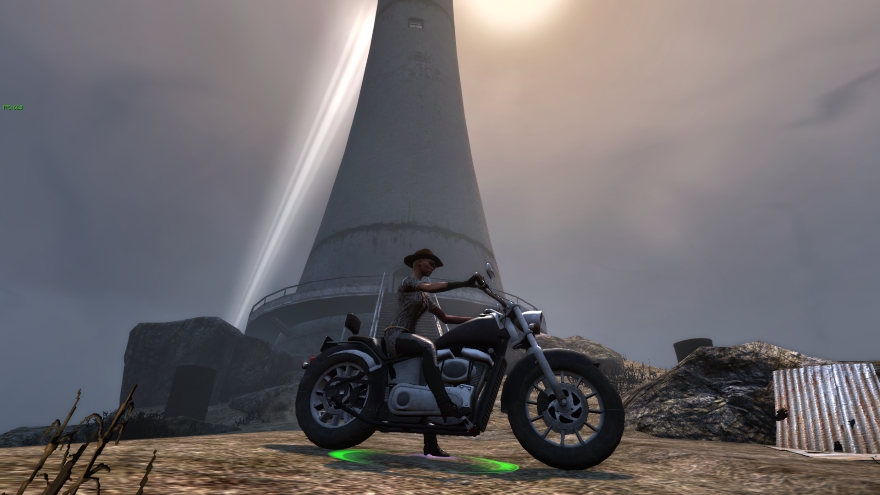 It’s kind of a war between The Secret World and Final Fantasy XIV in my inbox as of late, and I’m genuinely curious to see which faction will end up barraging me the most. No, that’s not an invit… nevermind, you’re already sending more in. Oh, go ahead.

Anyway, here’s reader Frank winging us a quality Heavensward shot: “This is my character, Axelay, enjoying a brief respite from the rigors of duty.” 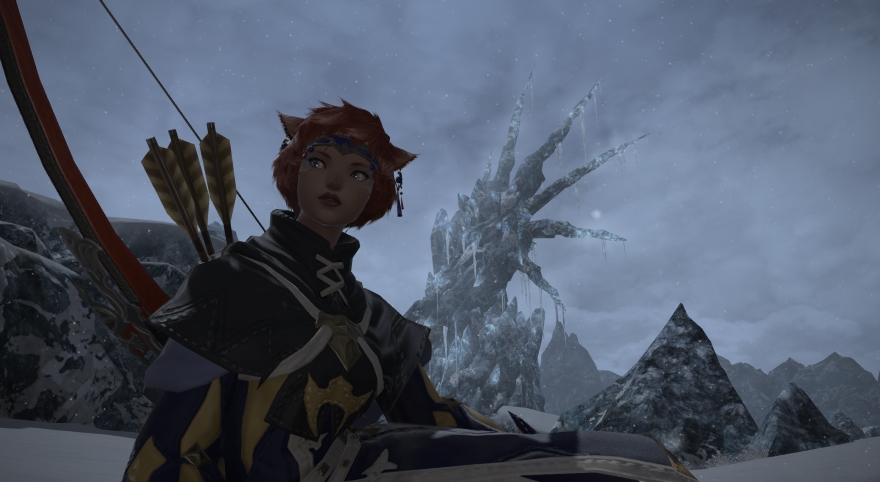 Hey folks? Never, ever hesitate to send me in screenshots of your personal housing. The rest of the game is the same for everyone, but your house is where your tastes and creativity can be expressed. I love seeing that!

This one is from reader Melissa, who writes, “I really enjoy the strongholds in SWTOR and started dumping money into my new Nar Shaddaa palace. I excitedly opened up a staircase to a small vestibule, then read the two-plus-million credits price tag on the large main room and balcony and began to despair. But hey, my Imperial Agent has never been one to obsess over money! So here she is kicking back and enjoying her new vestibule-turned-bedroom. It ended up looking way better than I had anticipated!” 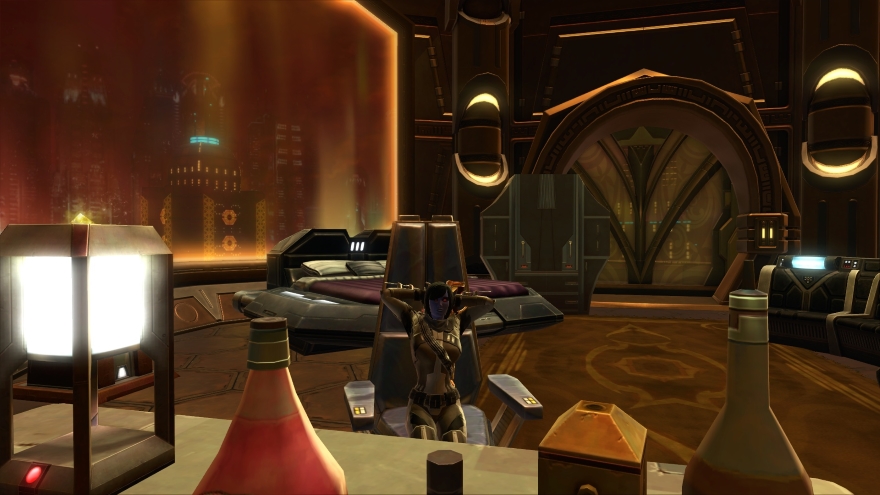 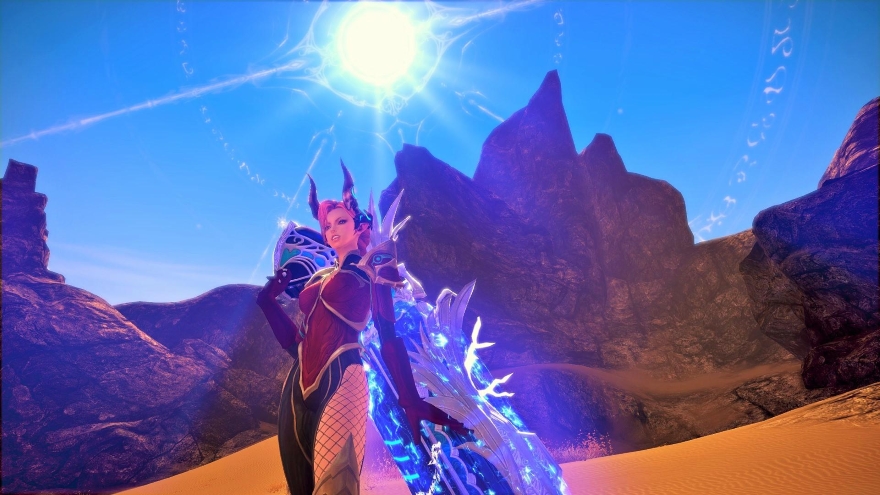 Need a screenshot challenge to keep you busy? Sure you do! This week, send me in a pic or two of your favorite MMO bosses and a story behind your encounter with that villain!

I bought a moto-bike yesterday too! A dirt bike would have fit sooooooo much better than this thing, but beggars can’t be choosers.

The serenity of the WoW Horde garrison herb garden.

Love me some art within art via in game screens.

ManastuUtakata I need a good distraction for what will undoubtedly be a horrible work week.  Gonna give Tera a go solely based on all the good pics I have seen in this column.

ManastuUtakata Zulika_Mi_Nam Odds were like 13-14 to one – although anyone can get caught it was mostly a forgone conclusion.  After the classless suicide comment, I was glad and surprised to see the Brazilians fans cheer more for Ronda than their own countrywoman -I hope it Bethe feel worse -yes I am petty like that.

BalsBigBrother Zulika_Mi_Nam I think she will be done with MMA and onto more acting stuff before there is any competition for her.  There is a mega payday fight if that steroid beast Cyborg can make R3’s weight class of 135lbs though – bossfight.
Claudia Gadelha vs Joanna Jedrzejczyk (115lb champ) will be the next sure thing good women’s fight. Joanna has the best hands of any woman at this point and they had a close match before.

Ghostmourn
The new graphics options for GW in the Edge of the Mists, huh?
Still dislike the set-in mindset of zerging PvD with nearly zero PvP in that map at all.  Such a great design to be wasted on circle flipping PvE for “Karma farming”.  Ironic that karma is a thing to obtain for cheating a system of PvP for exchange of PvE. They should really change around the rewards system in that map when HoT releases to discourage such behavior and make it what it originally was supposed to be: A PvP “lobby” for WvW players to still participate in WvW content while waiting for queues for the regular WvW maps.  Here’s to hoping they do so…

Great shots today :) (As always I love this column.) Finishing up my Guardians story line before I report back to the IT room tomorrow morning…I had a FREE week of wow in my inbox today but I’m fighting the urge!