Let me start by warning you fans of Final Fantasy XIV that this column may very well have spoilers, but that’s all right because you can read it without running into them in the main body of the article. (I can’t control what people put in the comments.) One of the new toys we have to play around with on MOP is the option to put spoiler cuts in our text, so we can hide things from eyes best not shown that text.

Now, let’s start speculating. Not everything herein is going to have spoilers aplenty for those who have already finished the MSQ of the expansion, but I’ll be doing my level best to make sure that anything spoiler-heavy is hidden away appropriately. Tread with some degree of caution and all, and let’s get on with throwing stuff against the wall and seeing what sticks.

We can’t use the past as a crutch 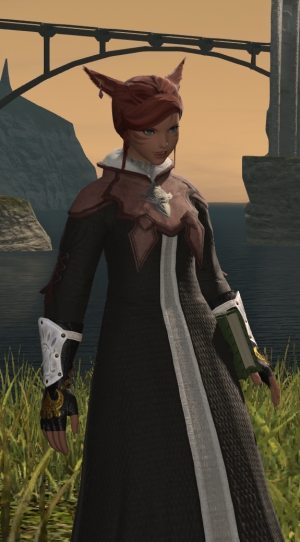 There’s something I have been particularly guilty of lately, and that’s assuming that what comes next in the game is based upon what’s come previously. I take full blame for that. I’ve been the first to say that while we don’t know for sure what will come with 4.0, we know that Samurai was close to being the tank class, and I’ve also been expecting the same sort of patch cycle that we had in 2.0 with the same content breakdowns. And that’s not realistic.

About the only thing I think we can definitely count on is that we’ll have the same sort of content breakdown for patches: 3.1 will be a patch to make it easier to reach the apex of the endgame, while 3.2 will introduce new parts of Alexander. But even that isn’t set in stone. I don’t think we’re assured of having new beast tribe quests, or that we’ll necessarily have the same cadence for new dungeons, or that each new patch of dungeons will push old dungeons out of Expert roulettes at the same pace, or even that we’ll necessarily have dungeons pushed out of Expert roulettes any longer. But we totally could, and at this point there’s no reason to assume one way or the other beyond “this is how things always were.”

Forecasting the future based on the past, in this case, doesn’t necessarily point us in accurate directions. A lot of the stuff that would have given use useful direction is either irrelevant or not entirely accurate. So I think that we need to base speculation on other things.

The next primal will be Ice and Lightning themed

One of the interesting aspects of Heavensward is that we have two primals playing a major story role that were extensively previewed: Bismarck and Ravana. You can go farm their EX versions for stuff now, if you want; I’m told they’re not terribly hard. (I’ve been slacking in that department.) But while they don’t have the explicit elemental associations of Ifrit, Garuda, Titan, and so on, it’s pretty clear that they do still have elemental associations.

Ravana is very clearly a fire and earth primal; his summon heavily features fire, there’s a great deal of association with metal, and his fight even includes mechanics that are clearly meant as a reminder of Titan. If that’s not enough for you, note that the Gnath compound is covered in Earth Sprites and Fire Sprites. Bismarck is even more explicit; he’s in the Sea of Clouds, and his fight heavily features summoning winds and using water-based attacks, right down to his “nail” phase involving a water-themed and wind-themed serpent.

Incidental texts here and there point to the fact that FFXIV uses the same elemental wheel as Final Fantasy XI, with its same chain of strengths and weaknesses: Lightning shocks water, water douses fire, fire melts ice, ice ablates wind, wind scythes earth, earth absorbs lightning. A quick glance at the resultant wheel puts the new primals as resting on opposite points, with the fire/earth and wind/water pairing sharing no weaknesses or strengths. And that leaves us with one pairing left unaccounted for.

I would also note that there do seem to be a lot of lightning and ice-themed things going on in the Churning Mists, but that’s just wild speculation.

So who could it be? Assuming it’s not another new primal altogether and discarding primals who are already in the game, Asura and Valigarmanda are both strong possibilities. Or perhaps that last pair will go unrealized and we won’t be chasing primals with the same frequency in future trials. Many things are possibilities.

Our enemies are staring us in the face

Click to reveal text, but beware spoilers for the main scenario and a tiny bit of post-MSQ stuff here.

Above the Allagan flagship in Azys Lla stand three statues, and those three statues mean a lot if you recognize what they are. They haven’t been a focus yet, but they will be because FFXIV wouldn’t make a reference to the Warring Triad without planning to do something with it.

The Triad in FFXIV are, essentially, the prototypes for Bahamut, bound by the Allag to serve as a source of power forever. Unfortunately, as Dalamud has already shown, the binding technology is neither absolute nor flawless; given time, it breaks down, especially when an entire group of Ishgardian zealots enter the facility binding those primals and decides to try to summon something equally powerful. This is the explicit reason you’re dealing with the extreme versions of Bismarck and Ravana; you want to make sure neither primal can become invested with the power of the Warring Triad.

Only it’s not exactly the same goal. The Warring Triad need to be resealed, yes, but Urianger makes it clear that the resummoned primals that you already killed are more of a “first things first” issue rather than being directly linked. They’re two branches of the same fundamental problem. Even if you don’t concern yourself with the other primals, there’s every reason to think that the triad is going to be a larger problem players have to deal with sooner rather than later, and it seems like an obvious foundation for another major expedition into danger.

It would also meet with the one criterion we have thus far for the 24-person content: that it’s a big reference to the history of the franchise. The Warring Triad were a huge focal point of Final Fantasy VI, just as Xande and the Cloud of Darkness had major roles to play in Final Fantasy III. While there are other potential routes to go as well and many other stories to draw from, it seems odd to think that the game would introduce a huge reference to the endgame of FFVI without intending it for a similar purpose to the huge reference to FFIII‘s endgame.

Not that I think we exactly need Kefka in FFXIV, mind.

Nothing is set in stone yet, of course, and everything here is speculative. But one of the fun parts of FFXIV is that if you look closely, you can logically draw out conclusions about what comes next. Or at least fumble around in hopes of doing so.

Feedback is welcome in the comments below or via mail to eliot@massivelyop.com, as it is every week. Next time around, let’s start taking a look at the state of the jobs in the game at 60, not in an effort to rank them but just to see how they’re different now (or how they are, period, in the case of the new jobs).

Maybe more of a cross raid system. Three alliances start in different locations and fight to the end boss room. Make the end boss like the dragon on steps of fait. Get to a pass where your alliance can attack the boss before it moves on and at the end all alliances come together to try and burn the boss down before it reaches its destination.

A Dad Supreme Did anyone…anyone at all believe that Namano was dead?

It may be that I’m just not a fan of 24man content, but I genuinely hope whatever they have planned is significantly better than the Tower raids. Those got boring too quickly. Either a more interesting, more difficult challenge or a greatly reduced length raid is what I’m hoping for. No more trash mobs for the sake of filler.

Oh yes, as far as predictions go, I can think of about 4 beast tribes they might add reputations for in this game; the Gnath and Vanu Vanu, of course. But the Moogles have a village now too, and the dragons, while not called beast men, could certainly qualify in every other sense. I’d certainly love to know more about the last two great wyrms as well.

Spoilers. Big ones. Watch out.
I’m surprised none of you have mentioned The Dragonsong War yet. Despite what’s been revealed so far I’m still not convinced we’ve gotten to the bottom of it yet. The parts we’ve seen in Echo flashbacks seem to support the dragons version of events, but something just feels off about it.
We’re told that King Thordan and his Knights Twelve betrayed the dragons to gain power, but the men I saw in that vision did Not seem like your typical power-hungry zealots out to rule. If anything they sounded like sad, penitent Knights, despite what it is said they had done.
And then there was the other flashback with Nidhogg and Hraesvelgr. In it, Nidhogg openly blames Hraes for the whole thing and says that he’d always known that the mortals would Prove to be wicked. Again, seems to support their story, but I also remember Hraes telling us earlier that it was Nidhogg who first learned of the mortals’ treachery. Now if he was always suspicious of them, it might make sense that he was the first to learn of it. But if he’s always hated us, even before the war started, then maybe he had a bigger role in those terrible moments.

the Magus Sisters are from FF4

bauhau5 louiedog_ mandodo69 Ala Mihgo was the first step in the empires war against Eorzea. It’s their foothold on the continent