It seems like half the Massively staff has been playing Project Gorgon here lately, so we figured it was time to seek out the devs at Elder Game and ask them a few burning questions. Lead developer Eric Heimburg was gracious enough to field our queries, and by clicking past the cut you can read about his thoughts on everything from indie MMO development to improving the game’s aesthetics to future features including a demonologist skill that actually risks your character’s soul!

Massively OP: Your latest Kickstarter funded with something like three weeks to spare; why do you think this one was so successful given that your previous two didn’t make it?

Eric Heimburg: Well, we asked for less money, for one thing! The last Kickstarter was aiming for enough to do a really innovative housing system that we wanted to try. This time around, we’re really just trying to make the game look better: another iteration of the character models, better terrain artwork, etc., so our goals are less lofty.

But yeah, we’re definitely earning much faster than before. A lot of that is probably due to better presentation: our video is better, thanks to TheHiveLeader, who jumped in to help us out. The game is more complete, too, and the new-player experience is a little less bizarre.

During the last Kickstarter, we’d just started implementing boss curses, and to make it easier to test things, one of the most vicious curses was temporarily in the tutorial cave. We had a huge warning sign explaining “newbies shouldn’t fight this! Seriously! This curse is very devastating!” but a lot of people thought we were joking. Then the curse turned them into cows, which caused a lot of hilarity… and rage-quitting.

Nowadays there’s still a horrific curse in the tutorial cave — we need to teach you about boss curses somehow! — but it’s much less life-altering and more humorous. 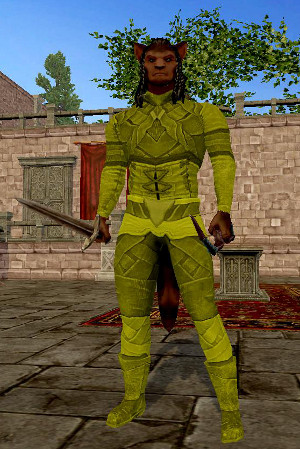 Gorgon has plenty of engaging gameplay even in a pre-alpha state, despite the fact that Elder Game is basically a two-person outfit. How have you managed to pack so many features into a working title, when larger and better funded dev teams turn out the same tired themepark mechanics year after year?

Hmm, that question has an epic-length answer! But I’ll try to shorten it down. First, we limited our tech goals appropriately. The Gorgon Engine can’t do a seamless world like World of Warcraft — it’s zone-based like in EverQuest 2. It also has very limited instancing support, and can’t do the elaborate phases that Star Wars: The Old Republic has.

We accepted these limitations with eyes wide open because it let us make certain other parts of our engine so much better. We have tech that lets us implement new game systems VERY rapidly. But that speed came with a price, one which many AAA games aren’t willing to pay.

Another reason is just experience. There’s a lot of common newbie-MMO team mistakes — ideas that seem clever but end up being disastrous in practice.

We also have a different design philosophy than the average MMO. Most MMOs are made with a design method called “gameplay loops”. It’s a very successful method of making a fun directed game. Basically you ask yourself, “what will the player be doing each 30 seconds of the game? [Killing a monster, usually.] Why is that fun? How do we make it even more fun?”

Then you ask “what is the player doing each 15 minutes? [Completing a quest, perhaps.] How do we make that more fun?” And so on, increasing the length of the “loop.” Many of the best AAA games in all genres are designed around gameplay loops. However, when used in MMOs, gameplay loops result in a game that’s very much like World of Warcraft: a directed, straight-forward experience without a lot of distractions. And to be clear, I enjoy that sort of game! Lots of people do. But that’s not what we wanted to make.

So instead of asking “what fun thing will the player be doing over and over?” we asked “how many different things can we let the player do?” A lot of the resulting ideas aren’t very fun by themselves — they’re just little pieces of a fun experience. And the game isn’t very directed at all. A common complaint among new players is: “I don’t know what I’m supposed to do next.” The answer is “do whatever strikes your fancy!”

We haven’t optimized every minute of the play experience, which means that sometimes the player isn’t having as much fun as they could be. But they’re doing the things they choose to do, which, for some players, is more rewarding than doing what the game “tells” you to do.

I think it’s a very complementary experience to the WoW-model game. Most players can enjoy both kinds of games, it just depends on your mood.

How long have you been working on Project Gorgon? i remember hearing about it in 2012 but i’m assuming you were crunching long before that? Can you estimate your total man-hours thus far, just to satisfy the curiosity of people who are crazy enough to imagine making an MMO with a tiny dev team?

Sandra and I prototyped a bunch of engines over the years, trying ideas and poking at tech, before finally deciding to “go for it” four years ago. We started working 20-hour weeks on it in 2011, and in early 2013 I started working on it full-time.

Our team size isn’t always two people, by the way — it’s shrunk and grown as funds allow. So it’s hard to give an accurate estimate of work done, but something like 8000-10,000 hours of work. Which is really a tiny amount of time for a AAA company, but it represents an immense amount of time on our scale! I work 10 to 12 hours on the game every day, six days a week, and have for years now.

But before anybody decides to spend 10,000 hours making an MMO, they really need years of experience beforehand. You need a broad range of programming skills and you need some experience working on MMOs. So I don’t want to give anybody false hope there. I love indie games and I hate to discourage indies, but MMOs are really hard. This game is the most ambitious thing I’ve ever attempted.

Do you anticipate building up the dev team at some point, or do you see yourself continuing as is?

It really depends on how much we can earn during development. This Kickstarter will let us contract artists for crucial assets we need, but it would be amazing to have a couple of artists on staff. We could really improve the graphics very quickly. So I hope to have the funds to make that happen through a combination of this Kickstarter and Steam Early Access sales. But I don’t yet know what we’ll be able to afford.

Even if we had a few million dollars in funds, though, I wouldn’t anticipate the team becoming more than, say, eight or ten people max. It’s the sort of game that needs a small team and a lot of communication. But it would be great to have a few more people on board, yeah!

Can you give us any hints about future features that you’d like to implement that haven’t been discussed on your forums as of yet?

We have a lot of crazy ideas back here. Like, notebooks full of ’em. But not every crazy idea pans out, so I couldn’t tell you if these things will really make it into the game or not. But one crazy idea I’ve been tossing around is demon summoning. MMOs always have a pretty cheap little demon summoning experience, because you can’t REALLY lose your soul or anything important when talking with a demon. Which in turn means that summoning a demon is just another way to attack monsters: you get demonic battle pets.

But what if you really COULD risk your character’s soul? What would that mean, and what would you get in return? … That’s what the Demonologist skill will answer. (If it ends up being fun!)

We also have lots of new ideas for interactions with the world — eventually I want nearly everything in the world to be interactive! We also have ideas for players who can create their own content. But I’m not sure what will make it into the launch milestone.

That’s the other thing to keep in mind: we intend to keep improving the game for as long as there’s money to do so. So “shipping the game” is just another milestone. We’ve got plans for WAY beyond that. Here’s hoping we get to show them off!

Sounds great, and thanks for your time.