Last week, our comments erupted over some game studios’ haphazard use of the term “MMO” — and how that overuse and misuse has possibly tainted the genre, leading other studios to avoid its use altogether. One of the games under fire is Shards Online, a game that borrows heavily from old-school sandboxes but is set up a la Neverwinter Nights to allow players to create their own rulesets and run their own servers, some definitely not “massive” at all.

We spoke with Citadel Studios’ founder and CEO Derek Brinkmann about Shards Online’s place in the broader MMO world.

Massively OP: First, how do you and Citadel define “MMO” in 2015? How does that differ from “MMORPG” and from earlier understandings of the terms? Do you believe your understanding of the terms has changed since Shards Online was first announced?

Citadel’s Derek Brinkmann: I don’t think you can define the term MMO by taking the literal translation of the acronym Massively Multiplayer Online (Game). This would apply to a game that allows thousands of players to interact with each other within the game. If you went purely off of this literal meaning, session based games like Diablo III technically fall into this category since there are thousands of people playing Diablo III and you can interact with any of them by jumping into the same session. And nobody thinks that Diablo III should be considered an MMO.

The best way to define the term is to look at games that are identified as MMOs. I don’t need to start naming them, but there is one thing that pretty much all of these games have in common: persistence. I believe there is a general sense among gamers that an MMO must provide a sort of persistent world that all of these players exist in. MMOs where every region is instanced (Guild Wars, City of Heroes) have a tendency to blur the lines in this respect, but at least in those games you and another player can still get to the same place without logging out. It “feels” like you are in the same world.

So with all that in mind, I would probably define an MMO as a game where thousands of players can interact with each other in the same persistent game world.

Backers have alleged that Citadel succeeded in its second attempt at Kickstarter only because Shards Online abandoned the MMO term, then returned to the term in recent press interviews. Do you believe that’s a fair assessment of the chronology? If so, why has Citadel resumed use of the term?

One of the things we learned from the first campaign is that crowdfunding type people really dislike the idea of a monthly subscription. We knew in the second campaign we had to get away from that model and go all-in on the buy-to-play model. When most people hear MMO, they instantly think of either a monthly subscription or free-to-play. Our game is neither.

So we did get away from the term during our second Kickstarter, but only to help reinforce the fact that once you buy the game you never have to pay another dime. (Unless you want our content packs that we will release regularly after we reach Beta.) 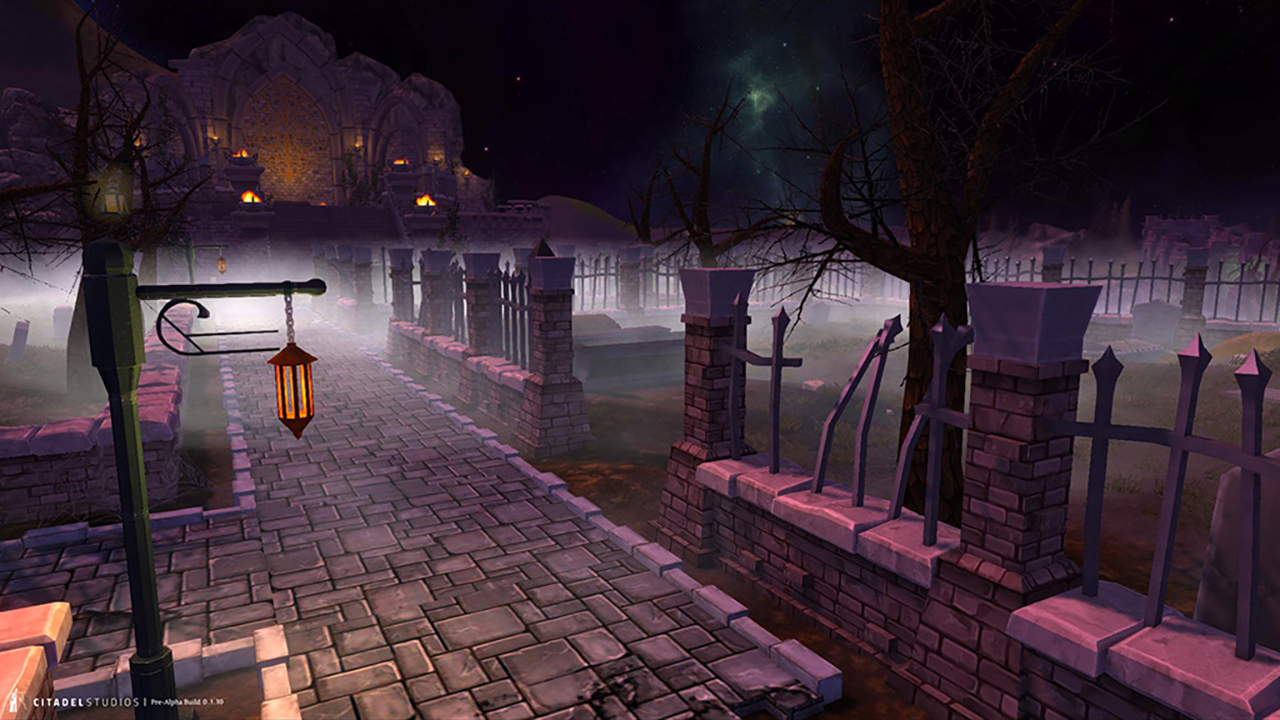 So is Shards Online an MMO, an MMORPG, a pseudo-MMO, a non-massive multiplayer online game, a “subscription-free online PC game” as the Kickstarter suggested, or something else entirely?

The engine and the base game are set up to work as an MMO. Shards Online is built so that the size of the world and the number of players any given server can support is only limited by the amount of game regions you connect to it. We fully expect that there will be large servers that support thousands of players at the same time.

The backers who don’t want us to call ourselves an MMO are afraid it will hurt the smaller communities. There are lots of smaller communities (lots of them coming from Neverwinter Nights) that have no desire to run a massive server. They want to run a small server of a few shards with a tight knit community. They are afraid that people will enter Shards Online with the expectation that they will be playing with thousands of people and these smaller servers will have trouble recruiting new members.

Finally, would you be willing to bring our readers up to speed on the most recent happenings in Shards’ development?

In a nutshell, we are currently in Pre-Alpha 2, which means the Pre-Alpha Admins are helping us test the player run server and modding functionality. Their servers are accessible 24/7 to anyone in the Founders Program.

The first pass on our first home world map, Celador, is nearing completion as we gear up for our next major release, Pre-Alpha 3. In this release, we will also debut our first iteration of player housing, and we will be opening the early access floodgates to all of our $40 backers. Pre-Alpha 3 is currently slated for release before the end of the summer. We are still accepting pledges on our website, so it’s never too late to get involved!

I know this sounds cheesy, but really the best way to get up to date on our development is to either check out our latest newsletter, or watch the highlights from our latest community roundtable (4:52).

Thanks so much for your time!

zenaphex I myself hope to find a home for a few of my own fantasy settings on Shards, at the very least my Dieselpunk Noir fantasy world that I’ve been writing for a couple years now.

Omedon Thanks for pinging it to us… Brinkmann was very classy in his responses too. Impressed all around.

It’s been notified like crazy at my e-mail. And that just because I comented there once.

People say they want “persistence” in their MMO games, but do they REALLY want it?

barantorfwl  I was really fond of the NWN’s, and backed this practically sight unseen when I saw what they’re trying to do.  Haven’t really had time to keep on top of the recent changes, but I’m looking forward to being pleasantly surprised when it drops (at least for  those in my kickstarter tier)..

I get so annoyed when I see games claiming to be MMOs. Like World of Tanks, Star Conflict, LoL, and DOTA 2. If those are MMOs, then any game with an online multiplayer component is an MMO, Halo, Battlefield, COD. Definitely a pet peeve of mine

I’ve actually been wanting the “MMO” moniker to shift more towards the idea of “persistent worlds”, and “POW” feel like a good one in name but… gosh, I worry someone would say, “Well, Splatoon’s money, levels, and ranks are persistent, player art decorates the city, and it’s online, so it’s a POW, right?”

Damonvile Rozyn bensku I don’t mean to imply that this site is confusing games, I just mean that they cover games that are of interest to MMO players and a lot of times the things that scratch our MMO itch aren’t even technically MMOs anymore. I think that’s perfectly fine!

Rozyn bensku This site hasn’t been a “dedicated mmo coverage site” since long before it made the switch. It has multiple blogs like not so massively etc and covers any game that looks cool. The ark server has nothing to do with it being confused with an mmo. He put it up because he liked the game and wanted to invite MO people to it.

Honestly is seems like there are some old school gamers who got off on turning their nose up at anything that wasn’t an mmo and they’re now like old dinosaurs stomping around making noise and that’s about it. I’m sure other purists for different genres are about making noise, but that’s all they’re really doing.

bensku Rozyn That’s my point. MMO gaming has kind of a tarnished reputation among PC gamers and yet because H1Z1 lent itself more to the survival zombie game like DayZ rather than an ‘MMO’ you had all these Steam customers buying it up without really thinking about it’s MMO-ness.

Colin Henry - August 11, 2020
4
NOW STREAMING LIVE ON TWITCH
OFFLINE - SEE YOU NEXT STREAM!
NEXT MOP STREAM
No events to display.

Wisdom of Nym: Just before patch 5.3 for Final Fantasy XIV

The Daily Grind: Who is the greatest female NPC in an MMO?

Cyberpunk 2077 details character life paths and a variety of weapons...

Guild Wars 2’s Festival of the Four Winds is live, along...

Legends of Runeterra prepares the Call of the Mountain card set