I play a lot of flight sims. The Sturmovik series, DCS, X-Plane, and pretty much every similar title ever released has found its way onto my hard drives at some point. Microsoft’s unkillable Flight Simulator X remains at the top of my personal heap, though, both because of its realism and because of the staggering number of pro mods — both payware and freeware — that have kept it relevant and looking good since its 2006 release.

The best of these mods, at least in my opinion, isn’t even a mod but rather a virtual environment called FSEconomy. It’s not quite an MMO for pilots, but it’s close.

FSEconomy actually predates FSX by a year or so. It debuted way back in 2005, but today it works with any version of FSX, X-Plane, and Prepar3D.

I was confused as to what FSE actually does when I originally stumbled across it, so here’s a partial description from the sim’s website: “FSEconomy has allowed over 4,000 registered simulator pilots to earn in-game virtual money by flying general aviation aircraft to and from nearly every airport on earth. With those virtual earnings, pilots can purchase their own airplanes, join or start virtual businesses with other members, operate FBOs, and more — all within the free world of FSEconomy.”

Put even more simply, it’s a persistent virtual world using real meatspace airports and hundreds of possible real-world aircraft. It straddles the line between single- and multiplayer because of the shared persistent world and because the world you’re visually flying through is unique to your PC, meaning that it uses the sim platform of your choice as well as your locally installed scenery upgrades and third-party aircraft skins. You can make do with your sim’s defaults, of course, but the 2006-era panels and models in FSX are definitely showing their age in 2015.

Fortunately, there’s a neverending supply of newer third-party upgrades like Orbx’s photo-real VFR scenery, A2A’s crazy-detailed AccuSim stuff, or Carenado’s fleet of general aviation aircraft that are accurate both in terms of real-world handling characteristics and the number of rivets visible in their visual model. Make sure you have a beefy PC, though, especially if you’re flying around major metropolitan areas!

But as I was saying, you’re basically flying through your local world alone, since FSE’s server doesn’t serve up a real-time visual environment. You won’t see any other players at your destination airport unless you invite them into your game via FSX’s (or Steam’s) multiplayer lobby. But FSE does track all of its aircraft in real-time, so for example, if someone rents the 185 bush plane that I keep at Annette Island, Alaska, I won’t be able to go fly it — and have the hours count inside of FSE — until the other pilot is finished. And when he or she brings it back, I’ll have to refuel it and possibly even repair it.

FSE basically exists to add purpose and easily discernible goals to general aviation flight simming. While it’s certainly fun to fire up exotic aircraft and take them around the pattern whenever you want, it’s way more fun to live the life of a virtual commercial pilot. You can even fly the heavy iron if you want, since FSE supports all manner of airliners, both modern and classic (and many virtual airline organizations use FSE as part of their day-to-day operations). Or you can do what I’m doing and criss-cross the globe as a small potato pilot-for-hire. The FSE system offers jobs at thousands of airports, from major passenger hauling operations out of LAX to floatplane cargo runs in the wilds of British Columbia or the ass end of Tanzania.

Thanks to the customizability inherent in FSX and X-Plane, you can opt to make your flights “as real as it gets” or cheat a little bit with things like user-defined weather, autopilot, and time compression. FSE is made with realism in mind, though, and you’ll need to pay attention to how fuel and cargo weight affects your aircraft’s takeoff, climb, and landing performance — not to mention its range — much as meatspace pilots do.

Since FSE is a shared virtual environment that allows the end user complete control over the realism of the experience, the developers have instituted what they call the 30/48 rule, meaning that the system will not reward you for logging more than 30 simulated flight hours in a real-world 48-hour period, which is an attempt at balancing the virtual economy for both casuals who slew around at 8X compression and no-lifers who sit in front of their computer 24/7.

Endgame, as it were, is basically aircraft ownership and acquiring your own FBO (fixed-based operator). If you’re unfamiliar with real-world general aviation, just know that this is a privately owned airport-based business that sells fuel, repairs and upgrades aircraft, provides flight instruction services, etc. FSE does a pretty fair job of simulating real-world costs, and if you opt to become an aircraft owner and you rent your equipment to other players, you’ll even have to comply with 100-hour maintenance inspections just like real-world commercial operators. 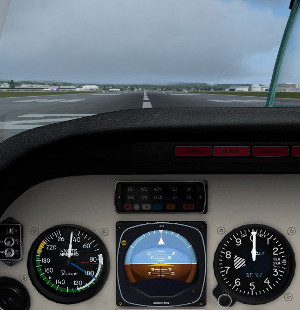 I’ve been flying pretty casually using FSE since December, and just yesterday I purchased my second aircraft — the aforementioned 185 — for $275,000. That dropped my bank balance down to around $5,000 USD, but fortunately I had enough to pay for the 185’s 100-hour and get it back in the air. I’m currently flying skiers and cargo to and from various out-of-the-way airfields in the Pacific northwest, making hundreds of dollars per flight hour even after my fuel costs are subtracted.

There’s probably a more efficient way to grind money; the FSE forums are filled with people looking to trade or purchase King Airs and Grand Caravans that carry two to three times what my 185 carries, but I’m loving the life of a bush flyer for now. Over the long term I may look to purchase an FBO somewhere in Alaska or Canada or even join one of the smaller virtual airlines, but that’s a ways off, given my current bankroll and given how much fun it is to be your own boss and shoot approaches into some truly ridiculous mountainside dirt strips.

FSEconomy is a free service, and the forum community is a helpful collection of aviation and simming die-hards. The software itself takes a bit of tweaking to set up properly, but if you can install third-party aircraft or scenery, you should be able to get it up and running in short order.

If you’re a flight sim fan who’s always wanted to haul freight — either the stationary or the self-loading type — or if you’ve ever been curious about the life of a commercial pilot in general, FSEconomy is great at simulating the most interesting bits. Plus it’s much less expensive and much more accessible than the real thing!