Hello again, friends, and welcome to another riveting installment of Choose My Adventure. I hope you have a sweet tooth (and a good dental plan) because things are about to get saccharine as hell up in here. Though some of the other classes put up a good fight in last week’s poll — specifically, the Fae Trickster, which managed to pull in 19% of the vote, and the Dracolyte, which trailed close behind with 16% — it was the Candy Barbarian that remained standing when the dust and confectioner’s sugar settled, reigning in a respectable 24% of the vote.

Although my playtime this weekend was relatively limited thanks to the start of a new semester — and the accompanying panic of finding out at the last minute that there’s a small-but-essential bit of paperwork I forgot to fill out — I still found ample time to get myself settled into the Candy Barbarian’s sugar-laden shoes. While I’ve yet to plumb the deepest depths of what Trove has to offer, my time with the game so far has left quite an impression.

One thing that I immediately appreciated about Trove was its sheer simplicity. Sure, I love games that demand my focus and require constant, uninterrupted attention to play well, but sometimes it’s nice to have a game that doesn’t overwhelm my feeble brain at the end of a long day while still avoiding the pitfall of being completely mindless, and Trove fits that bill quite nicely. The bulk of my experience in the game so far has been largely focused on searching out dungeons, descending into their labyrinthine bowels, and making sure that none of its inhabitants isstill breathing when I leave. And that, of course, means a lot of combat.

Since the Candy Barbarian — and each of Trove‘s classes, for that matter — has only three abilities (four if you include the passive), plus a basic attack and a dodge, there’s no need to spend ages trying to wrap your head around any sort of rotation, and the playstyle of a given class tends to be quite evident based on the abilities available, making it easy to pick one up and get to killin’ straight away. From the start, the Candy Barbarian’s playstyle was abundantly clear: Hit hard, hit fast, and cackle maniacally as enemies futilely batter you without so much as scratching your HP.

Even entire legions of enemies were of no consequence thanks to my Vanilla Swirlwind, which damages all enemies in the vicinity and knocks sweet healing candy out of them like so many papier-mache pinatas, while my leaping Sugar Crash ability made it easy to close the gap on any foes too cowardly to face me toe-to-toe.

On the rare occasion that I found myself overwhelmed, all I had to do was call upon my magnificent deity Eis-Crom to drop an Eis-Crom Cone like an especially delicious meteor on my enemies, dealing massive damage and spawning a Halloween’s haul of healing candy to put me back in peak condition. I’ll admit that I was initially not thrilled about playing a class whose homeland is comprised largely of cotton candy and looks like a dystopian future ruled over by a fairy-tale witch, but after wading through an entire dungeon’s worth of enemies in one fell swoop, I was singing a different tune. 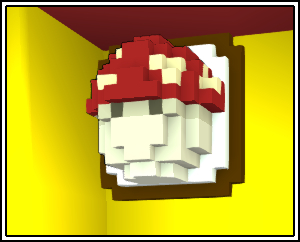 After I’d had my fill of battle, I returned to my (shamefully basic and as-of-yet unmodified) cornerstone to mount my mushroom-person-head trophy — seriously, look at it — on the wall. While I was there, I took the opportunity to take a dip into Trove‘s resource-gathering and crafting systems. Neither one is particularly revolutionary — anyone experienced with Minecraft and its many imitators should find it immediately familiar — but they get the job done, and the crafting system provides a number of useful products for all facets of the game. For the uninitiated, resource gathering consists mostly of wandering the world and utterly ravaging it for its natural resources, most notably minerals such as Shapestone and Formicite ore, then taking it back to your crafting stations to manufacture fabulous new gear, building materials, and decorations, among other things.

Considering the frankly absurd amount of different item models I’ve come across even in my small amount of playtime — including a particular favorite from the super-spooky Cursed Vale biome, which is a headpiece that looks like a rather irate (yet strangely adorable) ghost popping out of the top of your hat — the feature adds a spectacular amount of options for customizing your character’s look while also adding a certain gotta-catch-’em-all quality to the usual loot-gathering mechanic.

So now that I’ve had some time with Trove and gotten myself familiar with the basics of the game, I think it’s time to dive a little deeper into one of its many facets. That, of course, is where you come in. Trove provides a number of goals to work toward, and it’s your job to tell me what mine should be. One option is to continue with my dungeon-delving adventures with a focus on reaching the max character level (which is 20) and perhaps even getting my hands on some rare gear that can boost my level even further (up to, as I understand it, a maximum of 40, though if that’s inaccurate I hope someone will correct me).

Another option, though, is to try to farm up enough money to unlock a new class to take for a spin. If that option wins the vote, I’ll randomly choose from the three closest runners-up to Candy Barbarian — Fae Trickster, Dracolyte, and Pirate Captain, which were all within a handful of votes of one another — and push to unlock it and give it some hands-on time before my next entry.

Alternatively, I can focus on resource-gathering and crafting. If there’s enough interest in my doing so, I can attempt to gather up the materials required to create a club that any MassivelyOP community members can join to socialize and build together. Or perhaps you’d rather that I step out of the comfort zone of familiar MMO mechanics like combat and crafting and instead focus on one of Trove’s more unique aspects: building. I’m no architect, so I’ll have to start small in an attempt to avoid embarrassing myself (which I will probably manage to do anyway), so for my first construction project, maybe I’ll break down my ugly default cornerstone hut and replace it with something that hopefully ends up being a little more stylish.

The choice is yours, as it always is, so be sure to get your votes in before polls close on Friday, August 28th, at 11:59 p.m. EDT. And once again, if you’d care to group up and join me on my journey, shoot an in-game message to MVMatt. Otherwise, be sure to join me next week to see how my adventures play out. Until then, friends!

CMA: What's next for my Trove adventures?

This is by far and away Trions best game

This game is what LEGO Universe should have been – free To play, lots of adventure with copious loot explosions, and solo and co-op building opportunities in expandable subworlds.  Even though Trio exercises comparatively  limited oversight, I have yet to see anyone build a deliberately phallic cornerstone (although I haven’t seen that many club worlds so it’s possible they’re out there somewhere).

McSleaz Senjin92 That’s what I meant by max lvl. Sorry for not making that more clear.

Hurray for the Candy Barbarian! Now I know what class to unlock next for myself.

Also the max lvl cap is 42, but it doesn’t make too much of a difference.

tanek_09 Dantos Uh….I mean send to family owned farms where they can spend their days lazing on a fence in the sunshine and chase mice at night

This game is diabetes.

Dantos tanek_09 You LIQUIDATE the cats? You monster.

The Chronicles of Elyria class-action lawsuit has been split up between...