Guild Wars 2 hasn’t had much luck with its expansion reveal pace lately between dataminers and leaks, and this afternoon, that bad luck continues. A tweet from IGN, apparently entrusted exclusively with the news, blabbed some pretty big Heart of Thorns information, along with a trailer, which we’re going to hide behind spoiler code for those of you who’d like to try to remain innocent. And when I say big, I mean huge.

Click to reveal spoiler
The tweet appears to reveal that Guild Wars 2, currently one of the few buy-to-play MMOs on the market, is going free-to-play, at least with its base game. It also promises raids, which explains the “challenging group content” ArenaNet has been hinting at recently. 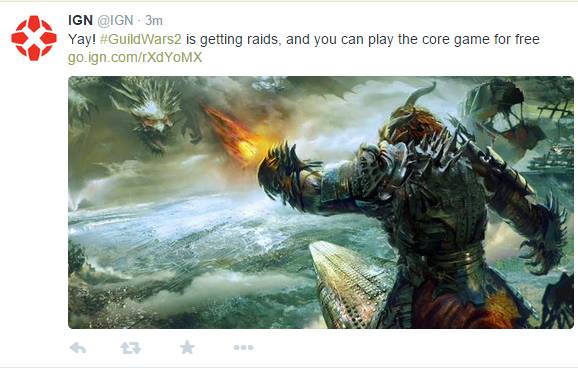 Data-mining suggests that the “free” looks a lot like a limited trial, with few character slots, a cap of level 15, rank caps, and limitations on mail, chat, trade, and PvP maps.

The social media and article were taken down within minutes, suggesting it was leaked a bit early, but Reddit has the whole recap. The trailer remains up on IGN’s servers at the time of this post’s publication. Obviously, don’t click it if you don’t want to watch it. You should probably not dip into the comments if you don’t want to be spoilered, either.

Massively OP’s Larry Everett will be at PAX to discuss the reveal with ArenaNet.

SoMuchMass Once again I appreciate you exposing the limits of your thought process. 10 man instance of raids does not equate WoW clone. As for quote “huge deal”….it wasn’t ArenaNet who said it, but rather Bree Royce who said it…and no sorry to bust your wingnut conspiracy, Bree Royce is not being paid by ArenaNet to “hype” GW2.

CastagereShaikura 80%+ of my GW2 launch guild left because the lack of raids. I think they are a bit too late on that one.

The worm isn’t impossible… I’ve done it several times. ^.^ Do a full run through of tactics in advancewith each group, treat it like a raid in a more traditional MMO, and use voice chat for best results. Need to know when to cool it on your worm very quickly.

Siphaed paragonlostinspace JamesCrow Well I’m so glad you all set that moral compass straight so the rest of us have your brilliant insight to follow.

Equilibrium31 ArbsX OhSnapItsKelz Pfft. A pessimist is just an optimist with experience.  :-)

digi_owl Polyanna Oh, no kidding! With the atrocious way that ANet “communicates” (or rather, refuses to), I don’t feel even a little bit sorry for them when something leaks via the dataminers. I can’t think of a more deserving game company.

Raids in GW2 i don’t know about this one. Most of their player base are casual players. So i see fights between the two groups. Just like it is in other mmo’s with raids.

I cant believe you listed the “megaserver taxi” as a positive for open world raids. The fact that those are required only reinforces the need to instance it.

If Anet really wants to take this raiding content seriously, it has to be instanced.

I actually like this idea.
Lvl 15 seems decent enough for a taste of the game. The lockdown on TP, Mail, Gold trading will avoid any problems with bots. Gold selling already exists, so i think it getting louder is moot.
The most important point, i think, is that any game who wants to be a e-sport ( yeah, they’re still trying that lolololol ), need to have a easy entry for players. Going free2play for pvp, even with limited ranks, will allow people to have teams, and probably, the pvp scene will get a little bigger.
I don’t think they’ll make the cash shop all around that. Lvl 15 isn’t much to make it, anyway.
Now, i hope Anet notices that when you want to make SPvP a popular e-sport, having a team with 4 eles and 1 thief win a weekly tournament won’t help. Balance the damn game.

Nreff Jack Kerras
Yep. Part of the whole idea with GW2 was that anyone and everyone was welcome to join an open world fight; no one could prevent it, and the game made sure to never penalize the players that got there first for having newcomers join them.
The main downside compared with instanced content and traditional quests is that this open world content isn’t on demand; players have little to no control over when it happens. It’s not like with traditional instances and quests that the player can choose to do at any time he feels like it.
(Which is part of why I don’t push for GW2’s system so strongly anymore. Either I’m the unluckiest player ever when it comes to those events, or else they are far too rare for the game’s own good, but I would often go so long without being able to join in one of those that I would log out due to boredom and go play something where I don’t depend on semi-random things happening for having something to do.)