The sandbox known as MUD — not to be confused with actual MUDs — launched an ambitious Kickstarter this week, provoking the MMO community to do what it always does when asked for money: be skeptical. Of note, many of our readers took umbrage with the idea that female playable characters are be tucked behind a half-million-dollar stretch goal (the published stretch goal chart has since been abbreviated).

We spoke with Pure Bang’s Founder and Lead Designer Ben Walsh about the female character model and the game’s overall campaign.

Massively Overpowered: So why not have playable female characters in from the start? What’s the hold up? Are you planning to add female characters eventually, even if the stretch goal isn’t reached? What about if the Kickstarter isn’t successful? If so, when’s the ETA?

Ben Walsh: Player aesthetics are important to us, but we are a small indie team of 6 people. We decided to focus on feature development and make sure the game is fun before anything else. Each new character model increases the cost exponentially. Not only do we have to make the model, but we also need to create animations and armor to fit. Having a female model would double the amount of armor models we need. This is not something we can take on lightly. We do plan on having female characters eventually and already have several concepts that we like, but we don’t want to implement it until we know we can make it great. If we don’t reach the stretch goal an ETA is difficult to gauge, but we will do our best to keep our fans updated and get the female playable character in. 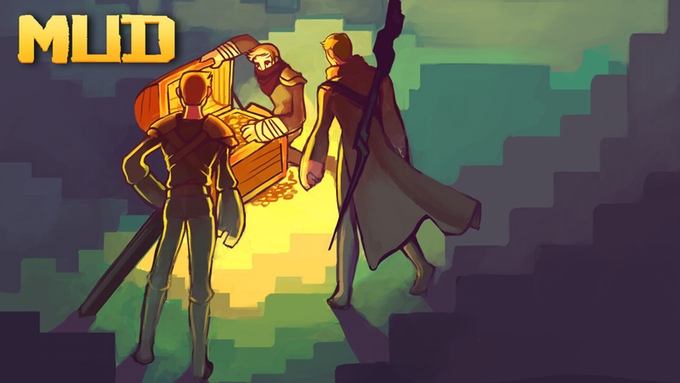 Guilds are slated at the $1.6m goal. While you could argue that mounts and pets aren’t strictly necessary, it’s hard to do so for guilds; they are the glue that holds communities together. Are we to expect no guild functionality unless the dedicated MMO server goal is likewise met?

A traditional MMO setup with persistent servers is our ultimate goal. However, the cost of creating and managing a scalable MMO is beyond our financial capabilities at this time. We felt a good compromise was to release an Early Access version of MUD that is smaller in scale and let the players run their own servers while we continue working on the bigger MMO systems. The Early Access release of MUD will allow up to 8-16 players. We want to complete the core experience and make sure it is fun before opening it up to potentially thousands of concurrent users.

We have already invested several hundred thousand dollars into MUD and we spent a lot of time scoping out our stretch goals to make sure that what we were asking for would be enough to finish the feature. We don’t want to be another overpromised and underfunded Kickstarter that fails to deliver.

Project Gorgon has generated a ton of positive buzz and just finished out its third (and only successful) Kickstarter at $74,781. Yet your first stretch goal begins at 150k and scales up to over a million. How do you justify your ambition?

MUD is currently about 20% complete. Our goal though is to create a living fantasy world where players and NPCs react to changes in the world. To do this we have created a really fun game that adds RPG elements to the mining and crafting you see in games like Minecraft. We’ve done a lot of testing and people really love it. Our plan is to continue working on this and updating it. Unfortunately, the reality is that building great games takes time and money; reaching our stretch goals would allow us to hire more people and get these great features in earlier.

We love MUD and we want to see it get finished so I hope your readers understand our passion and what we are trying to accomplish.

We do too. Thank you for your time!

Eliot_Lefebvre MikedotFoster Yeah, we only have around 100 scuttling legs. Get with it, Eliot.

Hey look, it’s another “women are too hard to model” argument.

breetoplay AnnaBee Samizdat agemyth Unmodded Oblivion was one of the most georgeous games of its time. I remember I upgraded PC just to be able to play it since it looks so much better then other RPGs

With the answers to the questions they gave, there is zero chance of them getting into my wallet anytime soon.  I’m honestly surprised they are at $10,097 on kickstarter at the moment.

Eh, I really doubt they’ll need to worry about the female model stretch goal. They need to actually hit their initial goal, and they’ve already committed one of the cardinal Kickstarter Sins — Though Shalt Updateth Regularly.

5 days in, a grand total of 0 updates even as the game hits the… 16.66666repeating percentile of its goal…? Its not always apparent, but developers/projects that at least even go so far as to say “Hey, we hit X amount, lets keep up the work and get this steamboat rolling!” have a much better chance of succeeding than someone who remains silent completely. They’ve slashed and burned their stretch goal list, obviously showing they know they aren’t going to hit anywhere near 500, and likely to avoid more of the “WHY U NO FEMALEZ?!” comments, but even then they could of posted an update to further explain themselves…

Instead this project is going to fail. I don’t really care one way or another about it, but the trend says it will be lucky if it hits 50% by the end. They have zero presence, and if they don’t change that soon they can kiss their kickstarter goodbye.

From the Kickstart page:
MUD at a Glance:
(…)
Full-Loot PVP

Not for me, sorry. I wish them luck and all, but there is no chance I will even try the game.

females are optional? ok thanks your game is even more optional, seeing the amount of existing games that don’t, apparently, think this is an ok thing to say and defend.

DeadlyAccurate Samizdat agemyth
Well, they never said it was double the workload, just double the amount of armor needed, and it would increase the costs, both of which are true.  I’m not saying I agree with their decision, but I do understand it.

They are honest and up front with their decisions, and it sounds like they’ve sat and looked at the costs of what they want to do and what they can believably do.  As for the game itself, it’s not something I am interested in (large voxel-style games just do not interest me), but it looks like they’ve done a decent amount of work and I wish them the best.