Here’s an interesting idea: using screenshots to make a calendar! Reader Elana was part of a team that did just that in The Secret World: “Earlier this year, Radio Free Gaia DJ Psywarrior proposed the idea of creating a ‘pin-up calendar’ on the RFG forums, from which I ended up covering 10 months of players out of the 12 months as their screenshotographer.

“Each player signed up for a Miss or Mister January/February/etc. slot, from which they would have to DM me to generate ideas of where they could have their images taken, and schedule what could run up to an hour at a time posing and going through all sorts of emotes and weapon abilities together.”

DJ Psywarrior added that the project took “long, long hours” and that she is already hard at work preparing for the 2016 calendar, the proceeds of which will go to charity. It was incredibly hard to pick just one of the pin-ups for today’s headliner, but I really liked the rich gold hue in this one. 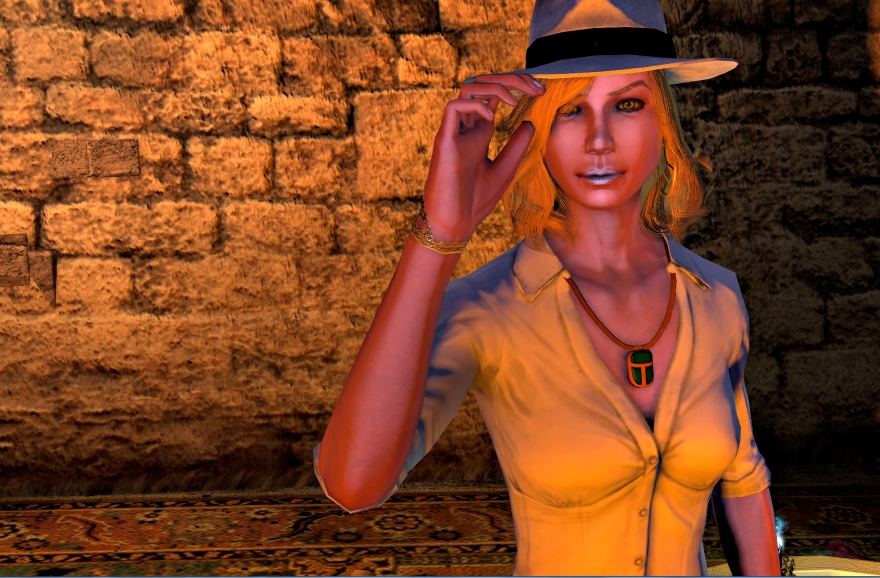 Speaking of The Secret World, this next collage from Spider Baby will take some explaining. “Simondedalus and I run an achievement club which specializes in farms for 10,000 achievement titles. I try and showcase our most spirited images on our site’s homepage and really loved how this one turned out — for sentimental reasons.

“I played City of Heroes nearly every day for 8 years and ran a super/villain group there. When I was making this collage, it looked comic book chic to me. Although it is not the actual case, I imagined our farm tank (Taiver, in the center of the image) was a diabolical Mastermind from CoX hell-bent on summoning thousands of giant baby scorpions to destroy well, nothing really. How does one destroy an empty desert? Though our fearless heroes band together to save the day!” 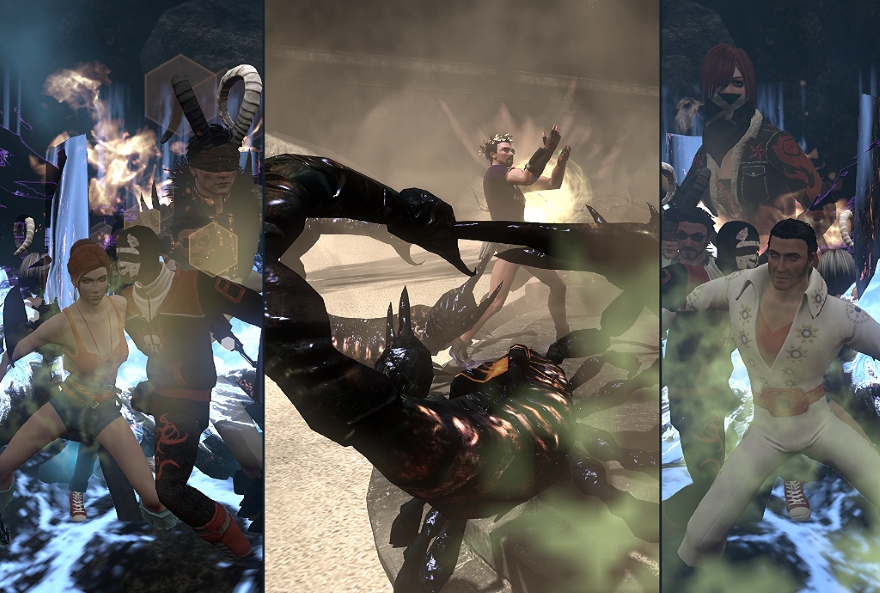 A couple of you took me up on my screenshot challenge to send in some gorgeous skyboxes from MMOs. Reader Ralph the Wonder Llama outdid himself with this amazing Firefall image.

“With a full-fledged day/night cycle, the sunrise in Firefall can be quite spectacular,” he wrote. “In this screenshot I was admiring the view as the morning sun was just peeking out from behind the huge wreckage of the CMS Arclight, the starship that tore a hole in reality and brought the melding to Earth. Who would ever have thought the site of the world’s worst man-made disaster could be so beautiful?” 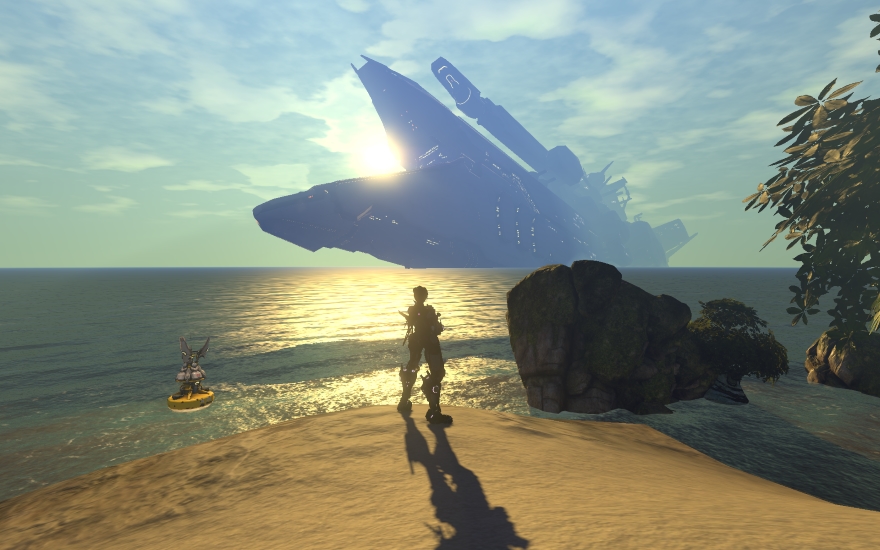 If you’ve made something with blood, sweat, and digital bricks in an MMO, why wouldn’t you show it off? Send them in, folks!

Eye of the Tiger has this Trove creation to share: “Welcome to the Sol Celestial Gardens. It’s just a little relaxation spot made in our club world (shout out to Clearly Clueless). This past week we’ve been expanding and building like crazy.” 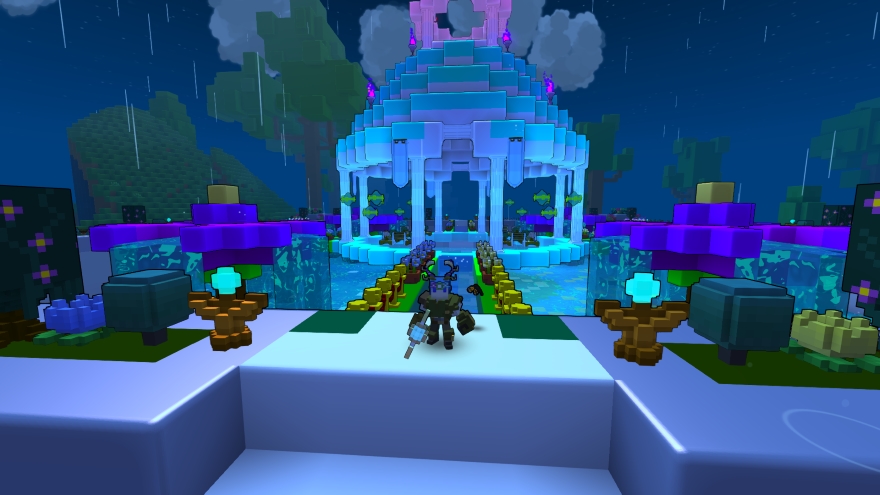 This week’s It Came from the Comments! winner is a breathtaking vista from RIFT. I always like seeing rifts from above when I play.

“I also jumped back into RIFT this week and had forgotten how easy it is to pick up and play,” Aboomwithaview posted. “With the graphics cranked up it looked a treat, so I dropped a few bucks to see me through until WildStar goes F2P.” 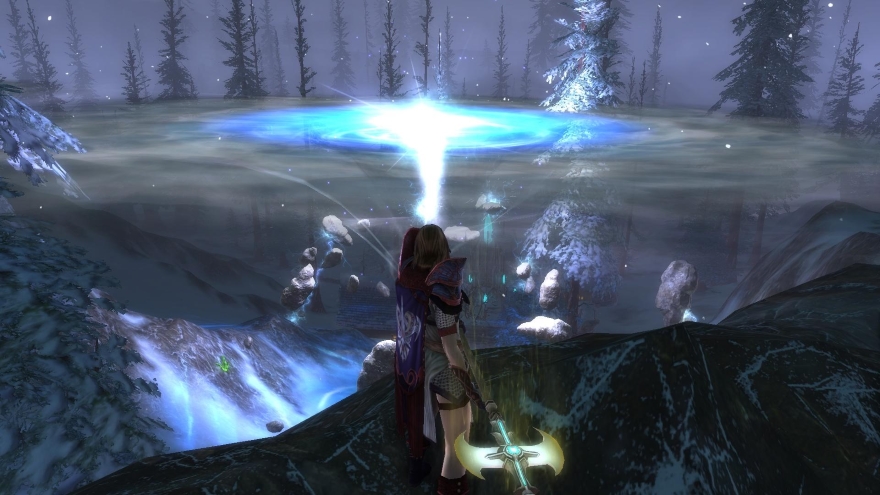 Go toward the light!

So I heard you need a screenshot challenge! Every MMO has a weird emote or two that is definitely outside of the norm. So why not experiment with the ones your game has and send me in some pics of your character being goofy?

melissaheather AilsaN10 Cujo H Nah, there’s definitely deterioration of some kind going on as it progresses, A 12-year old would be at let somewhat consistent.

Jossfan The link to the calendar is here – http://radiofreegaia.com/forum/m/6351204/viewthread/19989757-calendar-project-finished on our site radiofreegaia.com.  It was our DJ Psywarrior that did the idea along with Elana’s great screenshots.

TheChiefTurtle I think I just barfed in my mouth a little……..

Anyone have a link to the TSW calendar Justin is talking about?

zyrusticae aboomwithaview Enikuo Kaiser Sosey The entire Souls series is incredible, I cannot wait for DS3! What platform do you play on?

And some random selfies.

this is my character in Second Life… should have picked a great location, but wanted people to see how nice the avatars are.   She breathes, moves, has physics, eyes dart about, quite lifelike compared to most games.  You can upgrade literally any parts you can imagine from hair, eyes, feet, hands, animations, makeup, shape, and hundreds of skins to choose from, photo-referenced from real bodies.   If you like avatars, SL can’t be beaten.