So what’s the deal with World of Warcraft’s Demon Hunter? We just don’t know yet. But the space to speculate is pretty awesome.

I mentioned in my last column that in some ways, Legion feels like an expansion that should have been launched back in the post-Wrath of the Lich King space. Certainly the design elements seem a little odd, bringing in a lot of bits and pieces that had all but vanished from the game since that much-loved expansion was done with. There’s speculation to be done there, but the more immediate speculation is about the game’s second Hero Class and what it means for the game as a whole.

We don’t know yet how the class will play in any detail; we know a handful of abilities, we have some idea of the class resource (but not its real mechanics), and we know that in all likelihood they’re going to just be carting around a specialized weapon for the whole expansion because of the Artifact system. But we can still make some guesses based on that. 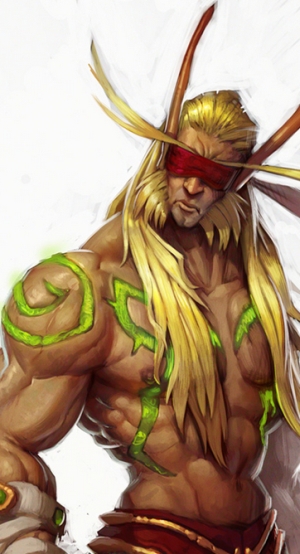 Let’s start by moving on movement. The point is being made repeatedly with Demon Hunters that this is a class of mobility. This is somewhat at odds with the actual combat mechanics for most of World of Warcraft; short of moving out of damage fields, this is not a game with regular and frequent telegraphs a la Final Fantasy XIV or The Secret World. And that mobility is stated as a repeated and important aspect of the class design, even beyond the mechanically more-or-less irrelevant double jump.

That doesn’t mean the idea is useless, however. Lots of boss fights can involve heavy movement, and having an equally mobile melee class could very well mean that the class will be able to overcome the usual issues of catching up with the boss. Most of the classes in WoW are not terribly mobile in multiple vectors; you have classes that can catch up or get away quickly, but being able to reliably spring across the battlefield at high speed is almost unheard of. Monks come the closest, and even then their mobility is more of a minor class feature than a focus of their design.

Of course, that brings up an associated question: What do Demon Hunters offer that Monks don’t from a mechanical standpoint? No two other classes share this much mechanical headspace; they wear the same armor, have the similar mechanical theme of being mobile attackers, both of them dual-wield (theoretically if not mechanically), and the only real part that’s totally unique for Demon Hunters is that they transform into a demon form.

Some of this is the problem that WoW has had since WotLK wherein the big additions make sense in that expansion and then in no subsequent ones; Death Knights feel out of place in Pandaria, Monks seem a bit odd post-Pandaria, Worgen are almost incidental in their Alliance membership post-Catalcysm, and so on. But in this specific case, you have two classes competing for the same theoretical headspace.

What can be done? Well, for one thing, you can sell that metamorphosis element. That could be as simple as a cooldown, but I wonder if we’re not going to see something even more interesting by making Demon Hunters a bit more on the modal side.

The idea is played up that Demon Hunters exist in both states, with their demonic forms put forth as a fairly central element. What if you swap between forms not with one as the “better” form, but as a different mode with a different set of attributes? As a tanking Hunter, for example, your demon form might make you much more durable while also making you much easier to hit; in elf form, you’re more evasive but you take more damage with each hit. 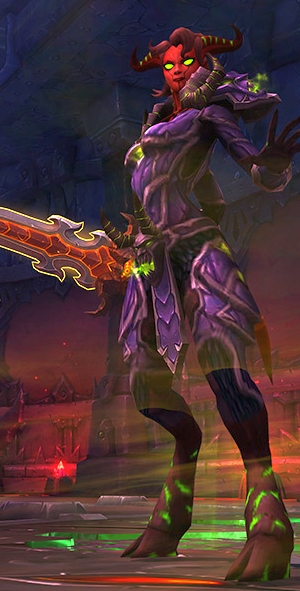 Ironically, this would bring Demon Hunters more in line with how Druids played at one point, popping out of specific forms to cast certain spells only to pop back into their various forms afterwards. At this point, being in a given form at all times is the default, so that’s changed, but the idea is still solid.

The shift to just having two specs is also part and parcel with something we’ve heard repeatedly about this expansion, that it’s refocusing the game on class identity. For years, I’ve been saying – with varying degrees of tongue-and-cheek placement – that the game really has more classes than listed, it’s just that most of those classes are along spec lines. Demon Hunters are the first real acknowledgement of that fact after Druids were hastily given a fourth spec as a mechanical kludge; they were designed to do two things and that’s exactly what they’ll do.

It certainly makes choosing between your two options for dual spec that much easier, without a doubt. Of course, that’s forgetting that dual spec was itself a tool to fix a problem that has since been wildly supplanted, so it’s a feature that almost doesn’t need to be in the game any longer.

Ultimately, I’m interested in the class, I’m excited to know more, but I also can see already that it’s tied into the expansion in the way that even Death Knights weren’t tied into their signature expansion. You can’t separate Demon Hunters from the idea of a full-on Legion invasion, and with the class limited to a very specific artifact weapon the possibility is introduced that they’re in for some very weird kludges post-expansion.

At the same time, the class isn’t trying to break the mold in the same way that Death Knights did with their three tanking specs. They’re a riff on a well-covered headspace, but from a lore standpoint, they work. And with a little extra effort from the developers, I think they can succeed at having their own space despite all of that; it’s just going to require a bit of careful evaluation and development and a fair bit of lore. This is, rather transparently, a change that’s being made with the lore and feel first and the mechanical considerations coming later, something fun and new that fits that has to be worked with mechanically.

And for all my apprehension, it’s been a long while since I’ve looked at something being added to the game that seems like it was fun first and balance second. So that makes me happy.

Feedback, like always, is welcome in the comments down below or via mail to eliot@massivelyop.com. Next time around, I want to talk about timelines, core principles, and what we need to know over the next few months before we get to this year’s convention and expected beta announcement.

So many ideas and a good reading really Eliot. But cmon, it’s WoW, you know in the end they’ll not deliver any ‘mobility’ (just the so-fancied double jump) and the class will be the same as all others, locked within the game that everyone know.
I never understood the love for Demon Hunters and it just feels they’re delivering it now cause they don’t have anything else up their sleeves. Well, let’s see.

redtoadsage TL:DR because Blizzard has a bad habit of assuming the player is stupid and designing for the lowest common denominator of skill cap or even basic problem solving in the name of ‘accessibility’. Look at Ulduars heroic modes that literally came down to “attack X” or “press this big red button”. They said “people found that confusing and difficult” and never did it again. With a large playerbase i assume that could be true for a certain number but when its dumbed down for all of us it just serves to dilute the experience into a bland rail roading treadmill in the name of accessibility that ultimately just gives us less to do and more complaints of nothing to do faster.

Who cares about the stock UI AH?  The AH UI is not important for the people who don’t care about the AH.  The ones that do have something like auctioneer, auctionator or TSM. TSM has 6,185,473 Total Downloads. It is very sophisticated software. Buy orders and cross-real orders, new features, would be cool from Blizzard.  But since other programs already do a much better job than Blizzard ever would, a better AH UI is quite low on my priority list. Blizzard’s let’s you view, buy and sell from the web or a phone app.  That UI is better than the stock UI, but then what isn’t?

voydd redtoadsage It could be the WotLK nostalgia, but I liked WG as well. (I also liked TBC AV and welfare epics, I was too late for AV weekends.)

Tattoo’s, lots of tattoo;s. I don’t know if I will roll a DH but the extra character slot will be welcome.

Remember talent trees? They were so great. Who cares about what people want to bring to raids, I want my Frostfire mage back. And my Shockadin. And Holy DPS.

redtoadsage They are supposedly revamping profs in Legion

redtoadsage I thought Wintergrasp was fun during WotLK times…

Some things I’ll never, ever understand:

(for that matter, why make all profs pointless instead of revamp or condense them if it was done to make new players feel less behind)

I have no understanding why you would remove aspects for character customization…it’s not like it was a lot to handle, and we could actually play the way WE wanted to. Now? We’re stick with dumb secondary stats, half of which your specific class/spec doesn’t want.

Why…for the love of god, have all of their PvP areas (Tol Barad, Wintergrasp, Ashran…etc) all sucked. All been worthless… It’s like they have no concept of what PvP is or should be. It utterly blows my mind they own probably THE coolest franchise of WARCRAFT and they still have not skipped all that nonsense and done something like a GW2 WvW zone or tried to emulate RvR somehow. These half asses attempts at PvP content are so pathetic it’s laughable.

Blah, blah, blah. Just put WoD on sale again already now that I have something cool to look forward to :D
(No offense Eliot. :P )

The Daily Grind: Do you actually use the ‘walk’ option in MMOs?

Wisdom of Nym: Final thoughts in the wake of the Final Fantasy XIV media tour

Astellia Online went ahead and sunsetted early this week – RIP

Choose My Adventure: Lord of the Rings Online might have been...