I know the majority of us on this site are PC players. I include myself in that group. And being a part of the PC master race, I have seriously wondered why a game like Neverwinter does so well on the Xbox. There is no Foundry, and strongholds won’t arrive on Xbox until later this year. On top of that, you’re forced to use an Xbox controller, which is the bane of my existence. But after sitting down to play the game on a couch in the Perfect World press room at PAX Prime this year, I think I could play it on Xbox and really enjoy it.

If you’ve been following the Elemental Evil coverage on this site, then there’s not a whole lot of news that I can give you from PAX Prime, but I do think that this was a good opportunity for me to do a compare-and-contrast between the controls of an Xbox One and the PC for a game that is my guilty pleasure. 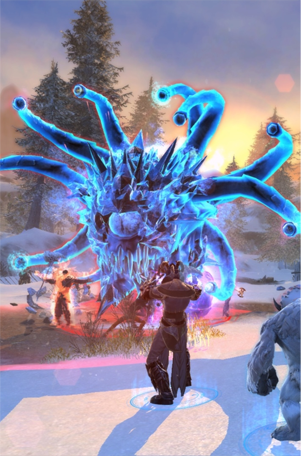 I don’t play Neverwinter as often as I’d like, but when I do, I like my controls to be a certain way. And when I was handed an Xbox controller, I must have looked visibly uncomfortable because the handler asked whether I was OK. Of course, it was the end of the day, so it could have been because I had just been walking for the last eight hours, but I’m blaming the controller.

I was shown the basics of the controls, then thrown in with a couple of other gamers to run an instance in just outside Icewind Dale. I know I had to be grumbling to myself as I was trying to figure out where the buttons were on the fly, and on top of that, I was playing a Paladin, a class just introduced to the game with the Elemental Evil expansion, which I have yet to play on the PC. I had no idea what any of my skill buttons did and naturally became extraordinarily frustrated.

Then my daily became available. You might be more familiar with the term “ultimate.” It’s called a daily in Neverwinter because it was meant to be an ability that you could use only once a day in the tabletop game. When this ability became available, I had to hit the left bumper and then hit Y button to activate the daily. At that point everything seemed to click. The fight suddenly started to make more sense.

Of course, this being a class that I had never played before, I still didn’t know what each ability was, but I became more effective in the fight. It actually became fun. I also quite enjoyed calling my mount to come assist me in battle; he’d come up for a second and blow fire on the enemy, then disappear again. Best mount ever.

Unfortunately, this now means that I have two guilty pleasures in one game: liking Neverwinter in the first place, and now, playing Neverwinter with a controller.

Before I close this up, I want to note that the key thing that really makes playing Neverwinter on an Xbox great is the the view on a large-screen television. I know I could drag over my computer and hook it up to my TV, which is why I’m a little hesitant to mention this as being a reason to want to play the game on Xbox. But if that’s not an option (as it isn’t for me), the new expansive zones in Elemental Evil really make the Xbox version stand out.

I’m not going to suggest that you go out right now to buy an Xbox One just so you can see how cool the Feywilds look, but I would suggest that if you already have an Xbox One and a PC, give playing this game on the Xbox One a shot. Who knows? It might turn into your guilty pleasure, too.

Elemental Evil goes live on Xbox One on September 8th.

Can’t you just play it on the pc with a controller?

I clicked on this article solely due to the picture of Minsc and Boo.

Yep. Sure wish more companies would include native gamepad support in their PC games.
Thankfully, support is coming to Elder Scrolls Online and Marvel Heroes. Neverwinter apparently had gamepad support during part of its beta phase. Diablo 3 devs cannot be bothered to add support – despite praise of D3’s control implementation on console.

usagizero Very few people I know use the phrase seriously. Almost always being said with a thick lisp and a phlegmy throat.

The missing features on PS4 (vastly inferior to PS3 as a media center) keep me from buying that, and leaning towards Xbox One.    But if Morpheus is truly compelling, and they have a decent library of titles, it might cause me to buy a Playstation again.    Either that, or Microsoft’s partnership with Oculus might eventually see an OR working with Xbox One, but it’s probably going to take well-tuned-VR to pull me into a console.

usagizero PC MASTER RACE. Youll NEVER stop me using it, proud to be a proper gamer with proper gear.

BKone They easily could since the Cryptic Engine natively runs on consoles. STO and Champions Online were both announced for the Xbox 360 at one point before version was canceled.  Champions Online for Xbox was essentially finished, and ready to launch but negotiations fell through with MS.

I don’t like consoles, I strongly dislike them to be precise. But if they ever put STO on any console, I will buy that console on the next day and denounce my PC master race title lol…