It’s that time of the month again — a glorious time that I look forward to and makes me cackle with glee just a little bit. Why? Because it’s when EverQuest II’s city festivals begin! Hey, what else would I be talking about? Starting the first and running through the seventh of every month, the denizens of Norrath have the chance to revel, race, and get rewards at one of the six main cities. This week-long party includes food and drink to celebrate with, a fortune teller to dispense words of wisdom (for the price of five gold!), and a chance to zip through the aerial race course. On top of that, there is really no better one-stop shop for housing decorations that players can take advantage of at any level.

Right now the Far Seas festival has stopped in Neriak, so folks have a limited time to get any of the Neriak-themed goodies they want for their homes or secure that zone’s aether racing title. Unsure on how to make most of your time so you don’t miss anything before the Far Seas packs up the fair and moves on? Here’s a guide that outlines the various city celebrations along with a few tips to maximize your efforts. (And for the more visually minded folks, here’s a video walkthrough we recently streamed.)

While each festival is associated with a city, the festival is actually placed outside the gates of said cities in order to allow all factions access to the merchants and quests involved. That means that the Qeynos festival is held in Antonica, while Neriak’s is in Darklight Wood and Freeport’s is in the Commonlands. While the first two are relatively close to the gates of the city, the Freeport festival is actually clear out at the Crossroads, not terribly far from the world. The only thing that folks will have to sneak into cities with aggro guards for is collecting the purple shinies to complete each collection quests (more on that later). The Kelethin festival is actually right at the foot of the ramp up to the city proper in Greater Faydark, so evil toons won’t have any trouble unless they wander onto the Queen’s platform. And as neutral cities, New Halas and Gorowyn are easily accessible by all.

So which festival is when? Because there are currently six, they rotate around twice every year. Here’s the schedule (along with locations), starting with January:

It should be noted that in New Halas and Gorowyn, the quest giver is not right with the merchants, so don’t panic when you can’t see one at the above waypoints; instead go to 2339, 80, 1441 for New Halas (by the campfire) and 2339, 80, 1441 for Gorowyn (by the world bell). Note: To use all waypoints in game, type /waypoint and then the coordinates.

If you ever forget which one is coming up, you can just go to the in-game calendar — found by clicking the EQII menu button on the bottom left of your screen — for a reminder.

Now the big question is why should you care which festival is coming — or about the festivals in general? What’s your motivation for attending one or all of these various fairs? It’s for the loot, baby!

You’d be hard-pressed to find anything in EverQuest II that offers so many good rewards to players of all levels and playstyles than festivals. And while things like Bristlbane, Brewday, Tinkerfest, and Frostfell happen once a year, city festivals run 12 times a year, giving players more opportunity to load up on goodies! There are nice appearance clothes — especially for female characters — as well as a plethora of housing items. We’re not talking about just a few little pieces, either, but full sets of building blocks (columns, walls, floor tiles, roofs, doors, etc.), lighting, signs, furniture, and foodstuffs. There are also paintings galore! Even better, you don’t have to be rich or high-level to obtain enough cool items to really deck out your own personal home; you just have to put some time in during the festivals. This makes the city festivals an ideal place for newer (and poorer) players.

To get a good look at all the items, you can check out the festival section of eq2decorators.com or control + left click each individual item in game to bring up the dressing room preview.

Of course, for collectors there is also collection quest tied to each city. The full collection will yield a themed mailbox that players can put in their personal houses — not guild halls — in order to send and receive mail from the home. Because collecting these shinies can involve sneaking into hostile cities, an easier way to collect them would be to take in an alt of that faction or have a friend of said faction nab you a set in exchange for your delivering one from your faction’s cities to them. 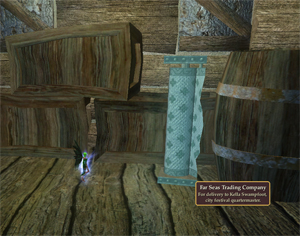 In order to acquire all these nifty things, you need to stock up on the special currency that these merchants will accept: City Tokens. It doesn’t matter how rich (or not) you are in game because gold will not help you get anything except the consumables. So how do you get these tokens? The main way during the festival is from the quest giver Kella Swampfoot; she offers three repeatable quests that have no timers, meaning players can do them as often as they wish. Each of the three caters to a different playstyle, so no one is left without a way to earn tokens. There is a gathering quest, a crafting quest, and a supply run quest.

An awesome bonus is that All-Access members get double tokens, so every time you turn in, you get double the amount. Trust me, it adds up fast!

My personal favorite is the gathering quest: Even though it pays out the fewest tokens, each node can yield up to 10 resources per attempt so it can go very fast — especially if your character is high in gathering. The best festival to just rake in the tokens is Freeport because the festival at the Crossroads is literally right amid a huge resource spot, so you can get your stuff and turn it in fast. Hint: For gathering, it is really advantageous to use a leaping mount to bound from node to node.

For Gorowyn, I’ll do the supply run quest since I am right next to the bell and can port right to Mara and back again… unless there are a bunch of others doing the same thing. Because those items on the docks are few in number and take time to respawn, competing with too many makes it take too long, in which case I just bell hop to Commonlands and harvest instead.

Regardless of which city festival is current, it’s also pretty handy to have a Druid or Wizard with you to call up portals for ease of travel. However, players who can whip out personal crafting tables (either items or from ability) may find the crafting quest to be the zippiest as they don’t even have to move!

Still haven’t got all the tokens you want? You can also earn tokens during the rest of the month by doing city tasks for your chosen home. Because listing all these out would take a full other guide, I’ll just link you an already existing one. Keep in mind, however, that to buy festival goods you’ll have wait until the desired festival is active to spend them

Players can also get some city tokens by doing business with Claudia, a Ratonga at the festival who’s willing to exchange old outdated tokens for city tokens. For each city token, players must give up five of any of the following: Token of Greater Teleportation, Concordium Note of Appreciation, Qeullithulian Token of Appreciation, Floret of Growth, Academy of Science’s Note of Service, or D.I.R.T.Y Money.

Finally, you can also earn tokens and rewards by participating in each festival’s aerial race. There’s no need to have your own flying mount (in fact, you will actually have to dismount to participate), so you can take part regardless your level. Just find the big mechanical contraption with the swirling spotlight and talk to the aether racing referee. Then move to the little start teleport pad and wait out the timer to start.

The race itself starts every 60 seconds, and your start time will depend on when you arrive. The object is to go through all the hoops in order as fast as you possibly can. The next hoop lights up once you are close to it, and it can be up, down, to the left, and/or to the right of you. Each course is also filled with power ups and power drains; blue clouds are one-time-use power-ups, while the green clouds are permanent, and the lightning clouds/bug swarms/etc. are drains you want to avoid. If you want to complete the course quickly, you might need to make a few practice runs. Another hint: To get the fastest scores, it is best to do the course alone so no one is snagging the power-ups on you. However, it can be more amusing and competitive if you do it alongside friends. 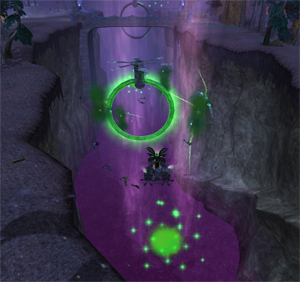 When you complete the race successfully five times, you get your own C.R.A.S.H. pad mount (yay mount!) that can also be an appearance for flying mounts. The mount comes in grey, red, green, blue and dark (blackish). Each city’s course will also grant a title for racers who complete the run in a certain amount of time:

My advice if you plan on getting all the titles? Practice the Darklight Woods run as much as you can! None of the courses turns me around as much as that one, with those hoops hiding behind trees and even behind you! To see where you stand time-wise, you can check the scoreboard and see who is in the lead overall or for most recent times.

Whenever I’m dipping my toes back into EQ2, as I am currently, I enjoy these festivals purely because I always start a new character and can combine leveling my harvesting skills with being rewarded with tokens for house furnishings. As for the rest of what the festivals offer, I’m afraid that for me it’s very much a case of “meh”!