If you’ve not heard of the game Gigantic, then I’m going to have to ask where you’ve been because Motiga‘s cross between a MOBA and third-person shooter has been everywhere. Its presence at PAX Prime was impossible to miss. The lines to play this game were nearly stacked on top of each other. Clearly, the world is hyped-up and in love with this game. So I had to see what the excitement was about, and Motiga offered me a chance to play the game with a group of other games journalists and a handful of developers. So that’s exactly what I did.

Everyone on this site knows the games that I cover, and they are all solidly MMOs. But what they might not know is that I also like third-person shooters. I’m a fan of Team Fortress 2 and SMITE, but I dislike League of Legends. My primary reason for disliking LoL has nothing to do with the objectives or community; I highly dislike the control scheme, which is why SMITE is OK for me. But even after playing Gigantic next to some very enthusiastic developers, I can’t say that I’m a fan.

The object of Gigantic isn’t too hard to grasp. Your job is to take out the other team’s guardian, a five-story creature that has summoned you to fight for it against another guardian. Ultimately, you want the guardians to clash against each other in a battle to the death. There are things you can do to help get to this point: Killing enemies gives your guardian power, and you can wound an enemy guardian when its heart is exposed, which happens after a rampage.

The art for the concept art for the game is gorgeous, but at this point the actual game itself lacks the same depth. Like many games with similar highly stylized art, Gigantic falls into the trap of not providing a good sense of visual depth. The lack of right angles or familiar shapes makes the arena hard to read sometimes. This can be overcome with good depth-of-field focus, but at this point it’s not noticeable in the game. It might also be that depth-of-field might be a bad idea because you do need to see the battleground at a far distance, and too much blur would make things more difficult to read. 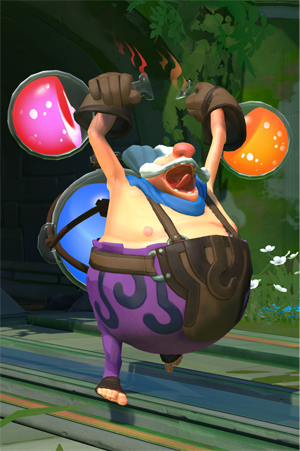 Narturally, the developers are highly enthusiastic about the game, and you can tell that there is genuine love for their creation. That’s one of the reasons it’s very hard for me to dislike this game. I even had a couple of developers over my shoulder giving me instructions on what I should and shouldn’t do during my two matches. Both would describe the character on the screen as an actual person. Saying things like, “Uncle Sven loves to toss a couple of bombs into the fray then run out” or “HK will plant himself on the edge of the battlefield and just mow people down.”

I enjoyed having the developers’ instruction. I don’t think that I would have had a good grasp of the game if they weren’t there, but then having a developer over my shoulder might have ultimately been to the game’s detriment. As I said, they were wonderful instructors, but if I had to have the developer over my shoulder like that, how intuitive is the game in the first place?

I’d like to talk about the canyon map itself. It was easy to navigate. I was happy about that. You could clearly tell where the good snipe points were, and you could travel from one point to the next easily enough. But without the minimap, there was no way for me to even tell what was happening where. It felt like a tunnel most of the time, and even though the guardians were literally five stories high, it was difficult to tell where they were and what they were doing without looking at the mini-map.

Rounding out my impressions

I really dislike speaking negatively about a game that developers clearly loved making, but the game is just not for me, despite my liking other games with similar feelings. Although the controls where extremely smooth and easy to grasp, the gameplay wasn’t as engaging as another true MOBAs like SMITE or LoL. The characters seemed to have personality, but not nearly to the level of the TF2 characters. I felt little connection to the character I was playing nor the guardian I was defending. Perhaps the game deserves another visit because so many people enjoy it, but as of right now, I wasn’t nearly as impressed as everyone else around me seemed to be.