I first covered Otherland, the Gamigo-turned-Drago MMORPG based on Tad Williams’ sci-fi book series by the same name, at E3 2012. The idea of having multiple genres in the same game was cool, as was instanced personal housing complemented by (at the time) non-instanced guild housing where players could donate “eDNA” to build NPC mobs that would guard guild lands during PvP raids.

Back then, it sounded fresh and new. WildStar was still far off on the horizon, having only just been announced, which was why I was surprised when Otherland disappeared, especially when NPCs were supposedly going to live their own lives, moving around town at certain hours based on player interaction — a feature I still don’t feel I’ve seen fleshed out well in an MMO. Drago Entertainment’s attempt to bring the game back years later with the same ideas is commendable, but as I downloaded my preview version of the game, I wondered whether the game could feel as new now as it seemed in 2012.

Naming characters comes before character customization. It’s not exactly new, and I’m not sure why we do this these days in some games these days, but it certainly helped to alleviate my feeling that the game might already be dated. I quickly learned to hit “F” to interact with objects before being told to, which again made the game feel still relevant for modern MMO players, though at the same time, it was a strong reminder that the game’s still in early access for a reason. I’m sure the tutorial experience and dialogue are going to change before public early access when other players will have access to the game, but I have to note the issues I ran into during my experience, just in case.

I know I’ve complained about MMO controls several times in the past, especially when a game doesn’t allow me to change my control settings (as this preview did), but I was quite happy with the WASD setup; “A” and “D” aren’t for turning but for strafing. I admit that while I haven’t sought any server first raid kills or led any ranked PvP in any MMOs for a few years, old habits die hard, and with more games going the action-combat route, having these keys for strafing instead of turning feels more relevant than ever.

However, I also know that, while more competitive vets like yours truly may enjoy this, more casual players might not. The graphics, sadly, haven’t held up well over the years, and the lack of voice acting makes me worry about who the target audience might be. And these were just my thoughts during the starting tutorial! 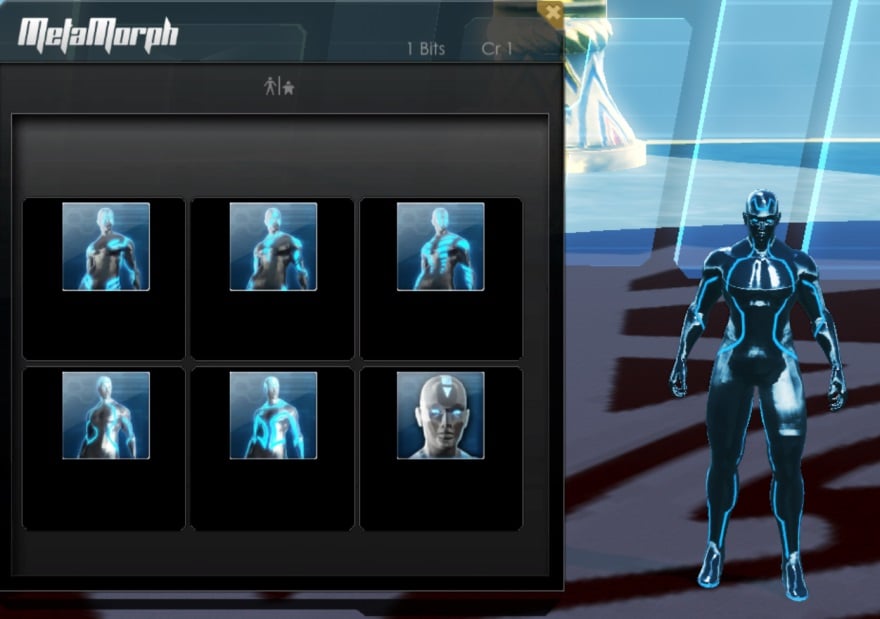 When I initially got to the first character customization screen, I thought, “I’m making a character from Tron. Cool.” Then, when I found the height and sliders, I thought, “I can be a fat guy from Tron. Cooler!” Also, as someone who shaves his head from time to time, I really liked the idle animations for feeling your (bald) head. Other animations, especially jumping, are quite fluid and natural. I rarely bring this up in reviews, so I think that’s something the Otherland team should be proud of. However, not being able to zoom in on my features or turn the character model was fairly disappointing.

As the tutorial continued, I was surprised to see that I could try out classes before committing to one. Not just one or two moves, but a whole bar full of them, though the hotkeys were laid out a bit weird. I was able to adjust, but there was a bigger problem I’ll get to in a bit.

While trying out my first class, the ranged marksman, I realized that I wasn’t really aiming. The game uses a bit of a target locking system. Once you fire or attack an enemy, you’ve kind of locked on it for a bit. That’s good and bad, but mostly bad for me because I felt like the advertising meant there’d be no lock on, just pure skill shots.

The tutorial UI at this point started to feel a bit too minimal. I couldn’t see my health bar at all. I used some buffs and debuffs but didn’t notice any visual differences, and sometimes, the attack differences weren’t apparent. I thought, “Are the ability descriptions right?” To be blunt, I saw little to no difference between a lot of my abilities other than the animations or the loss of different resources for my “power shot” type moves (energy is gained through normal attacks when you left click, then spent with right-clicking; this is explained only well after you’ve chosen your class and gone through two more tutorial zones).

What I hadn’t realized yet was that I was immortal. Frustrated with a general “sameness” I got when switching to the warrior class (some more AoE and melee ranged attacks), I stood around in combat while tabbed out of game for several minutes to try to find some information on the game (there is very little to be had). When I came back, I was still alive. I realized that not only could I not die, but I wasn’t getting any loot, nor could I open any inventory or character panels. I could see some stats on my weapons since you can cycle between two for different effects/power attacks, but I didn’t feel any major differences. I mashed buttons, flipped through various classes (energizer was fun since it healed and dealt damage with my basic attack depending on if I was targeting friend or foe), turned away from enemies but still hit them since I had locked on… it wasn’t what I expected.

The auto aiming felt stickier than I thought it would be from what I heard during my first interview back in 2012. The moves felt rather bland aside from the energizer’s duality. I feel that stripping down stats and giving new players brainless enemies was a huge mistake, and I’m hoping the next build corrects this. Going from all the boosts that seem meaningless on an immortal character to two moves on something that can die was more interesting (though I still was mostly just using basic attacks and power attacks). 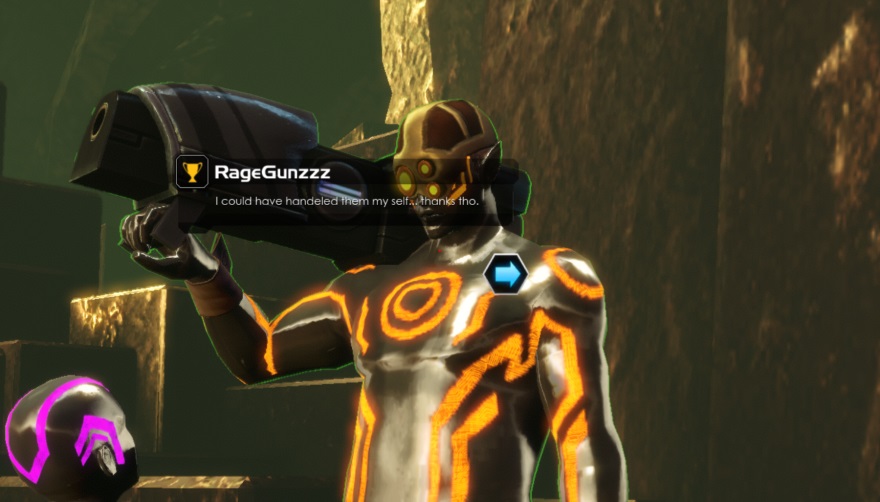 I have to say that despite some bugs, sparse decoration, and lack of explanations, I liked the atmosphere of the game almost immediately. When I first saw an NPC called “CritYouInTheFace,” I was a bit disheartened, but when he mentioned someone named “RageGunzzz” it clicked. The multiple worlds, Tron characters, ease of trying out new characters… we’re gamers playing gamers. It felt really fresh, even though I’ve read a few manga and short stories that do the same thing (but they rarely get their own MMOs).

After the first tutorial arc, I finally started getting drops — basically just money and eDNA, which is what I should be able to use to make my own NPC guardians, but at this point in the alpha, I don’t have that option. Looting was a bit buggy too, with items disappearing if I interrupted my data gathering (which is how you get eDNA). That, combined with the lifeless quests, got me to try going off road. Some terrain wasn’t solid, while other areas have physics extending well past their graphical borders. No quests out there, and the one chest I found seemed broken. It’s really an early access game.

When I finally did die — not an easy undertaking — my quest failed, but it was easy to relocate and abandon, so that was nice. However, after a while, I got the feeling that maybe veteran MMOers will be too experienced for tutorials like this, which strip you of consequence but try to give you choices after doing a dull series of tasks. That, or maybe I wasn’t invested enough in the game’s story yet. Also, I had no idea what my death penalty was, which probably isn’t a good sign.

After another rather dull story arc, I got a cutscene with no voice acting, which really stands out in a 3-D game these days. It makes the game seem dated. The music for the break-out scene was cute, but the scene itself made no sense. 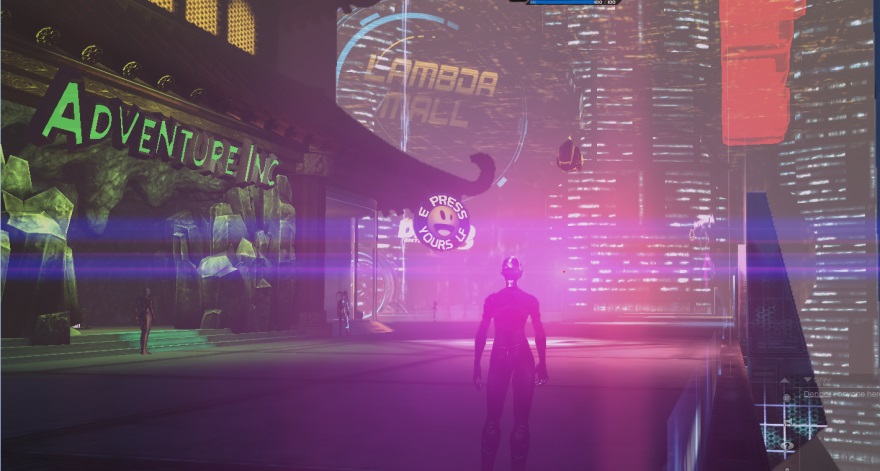 A wicked hive of synth and vibrancy

Having escaped the tutorial, I arrived at Lambda Mall, the major social hub of the game, which is awesome. It feels like the center of an online society, like SWTOR‘s Nar Shaddaa in Tron. It’s got interesting music, weird NPCs, shops with punny names, and ads everywhere (including for the game maker, Drago, which made for a good laugh). Shopping causes the client to slow down a bit, but it zooms in on your character, letting you see everything you’re buying on your character, and that makes it a different experience from most MMOs. It really feels like a mall. Still, it’s not perfect. For example, why can’t I move my avatar to see my back when shopping or customizing? Just the same, Lambda is a much more immersive city than I’m used to from most MMOs (aside from the lag), and the starter quests actually helped flesh it out.

Since you’re digital, further appearance customization makes perfect sense, as does the idea of just walking up to a panel and changing your look, which is what one quest tells you to do, and that actually felt appropriate and started to endear me to the game world. You’re not just a Tron character; you can be a stone-skinned guy, tiger girl, fat clown… lots of different options, and I was comfortable with all of them.

The next part of the starter experience is getting your own (instanced) home, which I really appreciated after another sci-fi game teased it for so long but still forced me earn even dull things like hotbar access. Decorating was pretty basic: choose floors, walls, eventually music (kind of like Animal Crossing). You can also add rooms, which seems interesting but isn’t complete. I didn’t always understand their functions (lots of lore terms I didn’t understand, not being a hardcore Williams’ fan), but there’s at least ground work for more. Sadly, during my testing, more housing items (including music) weren’t purchasable, so I couldn’t try them out.

My preview ended right before I got to reach 5 Isles, the first real quest zone in Otherland. I didn’t notice anything special from the NPCs in Lambda in terms of them having their own lives, but I’m hoping we’ll get to see that and whatever else Drago’s got waiting for us there when the game allows people to purchase Early Access… or when MJ streams her experience.