You can stop holding your breath now: The beautifully rendered action MMORPG Blade and Soul arrives on western shores very soon. NCSoft officially announced today that the closed beta for its premier wuxia MMO will begin on October 30th, giving the development team plenty of time to prepare the localization for it impending first quarter launch in 2016. And you can sign up for the beta starting today!

Blade and Soul has been a huge hit in Korea already. Its action combat and the incredible art by Kim Hyung-tae set it apart from other Asian imports. Also the 1v1 arenas that play very much like a fighting game — testing skill against skill — have put this game high on the most-anticipated list of many MMO players.

At this year’s PAX Prime, I had the chance to see the game in action and also sit down with a couple of the developers to learn what to expect when the game launches.

I am not myself a huge fan of stereotypical Asian-style comic book art, so hearing that Kim is the primary character designer for the game didn’t really impress me. I thought it was a boon that NCSoft hired on an exceptional artist for its team, but it didn’t have the same impression on me that DC Universe Online landing Jim Lee as its art director did. But that was before I saw the these characters in action.

When I sat down in front of the character creator, the demo had a set of characters premade for me so that I could jump into game faster. But I was allowed to pick which class I wanted to play. There were seven classes in total, ranging from the Summoner pet-class and the in-your-face Kung-fu Master to the spell-slinging Force Master.

I picked the class that I thought more closely resembled my average MMO playstyle: the Blade Dancer. That might have been my undoing. The game doesn’t play like a typical MMO. Not at all. First and foremost, it’s very definitely an action-combat game. I’ve played those before, so that didn’t surprise me; what surprised me was the combo system. One ability fed on the next, and landing the right combination of abilities was paramount for doing the appropriate amount of damage or defense. 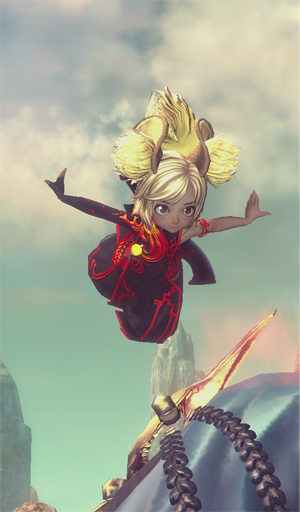 Unfortunately, I did not get to play the game nearly long enough to get an adequate impression of the game as a whole. First, my time was short, only about 20 minutes. Secondly, I spent a chunk of my time on the ground attempting to revive myself thanks to the game’s interesting death mechanic. (In order to actually die, the NPC or player that knocks you down has to apply a finisher, a bit like Star Wars Galaxies or Guild Wars 2.)

Being an artist myself, I can appreciate the art-style, but it was seeing these characters in action that really enhanced the character design. If you look at Kim’s art, you’ll notice that beyond the Asian flavor, there is a heavy sense of stylization that is best seen when the character is swinging her swords (in my case) or casting her spells. This might have been enhanced with a slight fish-eye lense on the camera as well that gave the character that Kim Hyung-tae style.

Although I did not get to see the PvP for Blade and Soul, I did get to ask some questions about it. Action-combat PvP always intrigues me. There are two types of PvP, open-world and arena; the arena PvP is 1v1, and in Korea it has become its own e-sport. First, all the gear is equalized. This means it’s a Westley-vs.-Fezzik fight: skill against skill alone. Secondly, the game will launch with cross-server queuing for PvP. Other MMORPGs should take a lesson from Blade and Soul.

If you’re an action-RPG fan, B&S is a no-brainer purchase. And the founders packs have some interesting perks including name reservation, which I was told is extra important because of the cross-server queuing. If you were to pick up the name Bob on name-reservation day, you will be the only Bob across the whole game. A full list of founder pack and rewards can be found on the Blade and Soul website. And don’t forget to sign-up for the closed beta while you’re there. If you have time at 1 p.m. EDT today, check out Twitch, where Blade and Soul devs will go live on the company Twitch stream to answer many more of your questions.