It’s everyone’s favorite day of the week — at least if you’re that annoying camel in that one Geico commercial — and you know what that means: It’s time for another episode of Choose My Adventure featuring Trove. Last week, I made an (admittedly less-than-impressive) attempt at taking on the role of architect to spruce up my cornerstone, but thanks to your votes, the pendulum has swung once again toward the more destructive end of the spectrum. While a fairly respectable 30% of you wanted me to add a few pages to my big book o’ crafting recipes, the resounding winner with over half of the total votes was good, old-fashioned leveling.

So this week, I stepped away from the crafting bench and hefted my weapons once again. Many dungeons were explored, many mobs were unceremoniously cut down, and most importantly, much loot was pilfered and plundered for the honor and glory of my delectable deity, Eis-Crom. In the end, I managed to make it to level 10 and then some, but that’s not to say that the journey was entirely sweet.

When I first set forth on my path to level 10, I have to admit that I was rather looking forward to it. Gathering resources and building stuff with ’em is all well and good, but for a progression-minded player like yours truly, I’d say Trove‘s real bread-and-butter lies in the purest form of RPG joy: seeking out dungeons, killing the things that live in them, and plundering their treasures in hopes of finding shinier loot with bigger and better stats. And for the most part, I’d say that’s what I got, at least at first. 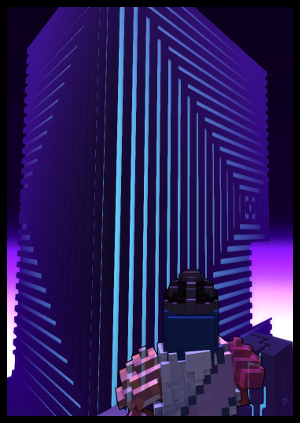 One of the real pleasures of the dungeon-delving side of Trove is that many (perhaps most?) of the game’s dungeons are player-designed, and as a result, there’s a huge variety of magnificently creative dungeons on display. Each of the game’s nine biomes has a ridiculous number of dungeon variants, and rarely did I see the same one twice. Some of the dungeons that really stand out in my mind include a massive labyrinth of subterranean corridors accessed by jumping into the top of a lava-spewing volcano and a towering cyberpunk monolith that could have jumped straight out of a Tron movie.

Unfortunately, though, the wide array of aesthetic variation is about the only thing that keeps dungeon-running even moderately fresh and interesting because the dungeon objectives themselves are disappointingly limited. Throughout all of the dungeons that I explored over the weekend — and believe me, that’s a hell of a lot — I found only two unique objectives.

More often than not, the goal was simply to find and kill a boss monster, which would be fine and dandy if it weren’t for the fact that the boss monsters all felt exactly the same. Invariably, it was just a bigger dude with more health that hit like a truck and summoned adds to help him until he died; not particularly exciting the first time around, and even less so with each successive encounter. The other objective was to “activate the cursed skulls.” Doing so initiated an event that required me to hold out against a couple of waves of basic mobs, which was generally more of a mild annoyance than any kind of actual challenge.

As a result, the real “fun” of the dungeons tended to stem not from completing the actual objectives but from simply surviving the dungeon in order to reach them. Don’t get me wrong, though; the level of creativity that has gone into some of the dungeon designs is truly staggering, and many dungeon architects have achieved Bond-villain levels of nefarious ingenuity in constructing rooms full of environmental hazards and clever deathtraps. But therein lies another problem.

Mob aggro range in Trove seems to be wildly unpredictable at best, which isn’t a huge issue in and of itself, but in dungeons, it leads to some decidedly anti-climactic dungeoneering moments. See, dungeon mobs often seem to aggro far sooner than the dungeon’s designer clearly anticipated they would. So instead of fighting the final boss in the meticulously deathtrapped chamber designed for that exact purpose, I usually ended up pulling him in the hallway just outside of it, and all of those painstakingly placed lava pits and spike traps wound up being little more than particularly sinister decoration as I traipsed past them to the dungeon’s exit portal.

On top of all that, I have to add that I felt a bit let down by how fidgety the game’s combat can be. Trove gives all characters an evasion ability so that they can attempt to avoid the more punishing attacks thrown their way, but even when I seemed to perfectly dodge a boss’s ridiculously telegraphed power-attack, more often than not the blow would still connect as if I had been standing perfectly still. Obviously I’m not exactly the gaming equivalent of Muhammad Ali, and I’m sure there were plenty of occasions where I flat-out flubbed the timing of my dodge, but I like to think that my many dodge-only bouts with Ornstein and Smough of Dark Souls fame put me at least a notch above amateur where evading attacks is concerned.

But still, Dark Souls this isn’t, so I chalked it up to my internet connection being rubbish and continued on my merry way. And honestly, despite the above paragraphs of complaints, I rather enjoyed it for the most part. I was constantly fed a continuous stream of fancy new weapon and armor upgrades that made the repetitive dungeon objectives and somewhat finicky combat well worth my while. But a short time after hitting level 10 and setting foot in my first Uber World, that changed rather quickly.

After a handful of Uber World dungeons, I was completely decked out in resplendent-quality gear, so I decided I’d try to step up to the next rung in the gear-progression ladder and try to hunt down a Shadow Arena in hopes of getting my grubby paws on some fancy “shadow-quality” gear. Those hopes were quickly dashed when I realized two things: First, Shadow Arena entrances seem to be incredibly rare, and in fact I didn’t come across a single one over the course of five or six hours of playtime. Second, even if I had found a Shadow Arena, it wouldn’t have mattered because in order to access one, I needed to have a shadow key.

As far as I can tell, the only way to acquire said key is to craft it. Doing so requires that you gather a certain number of shadow key gems and shadow key fragments, both of which are received as rewards for completing dungeons in Uber World zones. The recipe for a shadow key requires only 10 shadow key gems, which isn’t too terrible considering that I had managed to scrounge up a solid seven or eight over the course of normal play. The kicker is that it also requires 400 — yes, four-freaking-hundred — shadow key shards, and as of this writing I’ve got a paltry 72 sitting in my inventory. So alas, there were no Shadow Arenas for me this weekend, and there probably won’t be any for some time to come. It’s something to work toward, I suppose, but I still found it somewhat jarring how suddenly the game shifted from smooth-sailing fun to mind-numbing grind.

At any rate, that about sums up my weekend’s journey of loot and leveling, and though our time with Trove will soon be drawing to a close, I felt it was only right that I give you fine folks one last vote to revisit something that many commenters spoke up about in the first week of the series.

Back when it came time to choose my initial class, there were many cries of, “What about the Tomb Raiser/Boomeranger?” Since neither was available as a starting class choice, I figured that, since I’ve now managed to accrue a pretty solid balance of cubits, I’d let you folks choose one of them for me to take for a spin to close out Trove‘s run. But wait, there’s also a third option: Next week, on September 15th, Trove will introduce its newest playable class, the Lunar Lancer. If you lot would prefer to see it in action instead of the Tomb Raiser or Boomeranger, I’ll postpone the next installment by a week so that I have time to give it a go and report back with my findings.

So without further preamble, head to the poll below to vote for the necromantic Tomb Raiser, the rather self-explanatory Boomeranger, or the brand-spanking-new Lunar Lancer. And as always, be sure to get your votes in before the poll closes on Friday, September 11th, at 11:59 p.m. EDT, and I’ll see you again next week. Until then, friends!

CMA: Tomb Raiser, Boomeranger, or Lunar Lancer? The power is yours!

You can also upgrade your gear in a shadow forge, which you can craft. That’s how I got my shadow gear. I’ve only done one shadow arena. And, the arena entrances seem to be more prevalent in the higher level uber worlds.

I did my time in Trove, so I could ge Vox (budgie mount for Rift). I was bored to tears by the time I hit 20. The building of things is fun, but the rest is so utterly mindless without any sort of real questing.

Mind Flayer Not sure when and where you’re signing in – I still see the blitzes both when I go through a portal or when I drop into the Hub world.  I also almost always get visitors whenever I put my cornerstone up (but I have a U5 and U6 portal on the front, so they often just come by to jump into them).

I logged back into this a day or two ago, and only encountered 3 people, total, the entire time I played.
I remember the mad blitzes in zones when you’d go through a portal, this time, nothing.
Has this game pretty much died off?  Or at the very least suffered severe population loss?   O.o

Once you are over level of the dungeons you can start blitzes through them to the end and rake in the fragments.