I’m going to be very surprised if we see World of Warcraft: Legion before June 2016. The odds are good that a beta announcement is coming in November, and roughly seven months of beta seems fairly normal. I certainly wouldn’t push the beta any lower than four months, which would give us a launch in March at the absolute earliest. This means that even in our most unrealistic scenario, we’re looking at a content gap of nine months.

More likely, a year. At least.

Yes, I’m aware that we’ve been told there’s more work already done on Legion, but we’ve heard that during every single World of Warcraft expansion announcement, and it has yet to mean much. So after an expansion that didn’t exactly fill anyone’s heart with joy, we’re facing down an almost identical gap in terms of content, only this time it’s coming after an expansion that lasted for only a patch and a half.

So here’s what Blizzard needs to do between now and then.

Let’s start with the obvious: The thing that Blizzard most needs to do — have the expansion out faster — simply is not going to happen. It can’t. If the expansion were going to be out before January, that would have been the point of Gamescom, and it would also be crazy fast for a studio that has proven consistently unable to hit those sorts of goals. So that isn’t going to happen.

What we need, then, is something different: We need to be drowning in information.

This is not a substitute for actually having the expansion in our hands, but it’s still something desirable because it at least gives us something to chew on. To be fair, we need to be swimming in information now, so the ideal window has kind of passed, but then we really should have been entering beta in August for a more rapid release, so “should have” isn’t a useful modifier at this point.

What we’ve gotten has been a dribble of information, mostly from Dragoncon, and peppered with a lot of “not ready to talk about” elements. That is a really bad thing at this point because the last major element that the designers weren’t ready to talk about was the plan for flight in Draenor, and look how that turned out.

Blizzard loves saving its reveals and bunching them up, but that’s a terrible approach when players are watching intently to make sure that the next expansion doesn’t repeat the sins of the last one. The refrain has been “we’ve heard your complaints,” but without more information, there’s no indication the studio understands what those complaints actually were or whether or not they were heard.

Dungeons, we’re told, will be relevant again. How? Are we just walking back to badges all over again? That’s what happened with Timewalking, and to the great surprise of basically no one, that’s been a hit. It turns out that people like doing regular ol’ dungeons and gearing up in them. But rather than saying, “yes, we’re doing that,” Blizzard has offered only a resounding silence for people who felt locked out of content for most of Warlords of Draenor.

There’s also a classic reluctance to say what’s going on because it might change again. We know multistrike is going away and other secondaries are changing somewhat, but… how? In what fashion? What can we look forward to when it comes to these stats? Yes, it might change again down the line, but the funny thing is that absolutely no one will rush out and re-gem or re-enchant or reforge gear to account for these changes, due in no small part to the fact that reforging no longer exists and the others have been almost entirely obliterated.

Sure, everything is subject to change. Sure, some people will be upset because they heard something that they liked and then it changed into something they didn’t like. But hearing nothing, in this case, is far more dangerous than hearing something that might change again. And if we’re so early in development that these elements are changing too rapidly for anyone to make a coherent statement… well, that’s a different trouble altogether.

We’re told that some specs may be changing names. We’re told that specs are getting redesigns to bring them more closely in line with the central fantasy of the spec. But if you’re looking for hard data, you don’t have much if any. So what would be great is to see some of that, to even get a peek at the discussion. 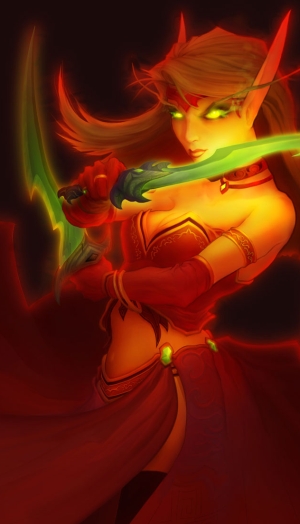 Seriously, Blizzard: Once a week, post about the state of these spec redesigns and where they’re aimed. Post about professions. Post about class halls. After a great deal of feedback, the developers basically stated outright that the Rogue class hall was 100% what had been originally announced and Ravenholdt wasn’t even considered, but it’s all right because Rogues will still like it — you’ll see.  But don’t just tell players that; show us. Let us see what those sewers look like, give players a reason to say, “Oh, yeah, that looks really cool after all.”

Yes, all of this stuff is subject to change, but the people who are looking for information know that it’s all subject to change. What is more important, in this case, is that it shows that something’s happening. It gives people reasons to be excited. It’s the sort of thing that makes you frown a bit and say, “You know, maybe I’ll start leveling a Hunter now, just to get ahead when Survival becomes a melee spec,” or something similar.

It also allows for genuine discussion and back-and-forth, which means that the players who are engaged with the game can stay engaged with the game. This is something that WoW has struggled with and is still struggling with right now, these content droughts that lead to complete disconnection from the game itself. Nothing is happening, so people leave, so social bonds fragment, so more people leave, and so on. It hurts the game, it hurts the community, and it’s entirely avoidable.

I’m hopeful, perhaps unfairly so, that we’ll see a couple of other updates before Legion. Not major content, but quality-of-life improvements here and there, like more productive ways to farm old content even just for transmog. (There’s that new transmog system coming, supposedly, and won’t that be glorious.) As it stands right now, we’re staring down a long stretch of time without much of note happening, and while Legion is quite clearly a play to get people hyped up for the game once more, it’s not going to have much success at that if it’s losing audience members before it even launches.

Feedback can be left in the comments below, as always, or sent along to eliot@massivelyop.com, also as always. I am predictable. Next time around, I want to talk about my own personal hopes for the expansion based on what we’ve been told thus far and the direction the game has gone as a whole.