Two weeks ago, ZeniMax launched the Imperial City DLC for Elder Scrolls Online, and yet I have little desire to check the new content out. It’s not that it’s completely off my radar; I understand that this addition to the game has been highly anticipated by a certain segment of the game’s population, and in fact, if you had asked me about the Imperial City when the game launched, I would have said that I really looked forward to seeing it.

The Imperial City has a lot to offer. The Tel Var Stones is a wonderful open-world PvP mechanic, for example, at least for those who love open-world PvP. But it’s just not enough for me. I’m also not that interested in seeing the Imperial City itself. There are so many beautiful landscapes in ESO already that the drab, all-grey-and-zero-color zone of the Imperial City seems depressing and lifeless by comparison. You might be thinking, “But that’s what it’s supposed to be. It’s a bleak, war-torn zone. It’s not supposed to be pretty.” I understand and respect that, but it doesn’t make it more desirable for me to see. (Also I’m afraid that Oblivion did the Imperial City better. And with mods it can look nearly as up-to-date as ESO.)

So at this point, you might wondering why I still play ESO if I believe things like “Oblivion did Imperial City better.” I’ve not kept a secret my dislike for the game’s PR and its endgame systems. But I still play because the game is still a lot of fun — maybe even more fun — without endgame. Here’s why.

I understand that the Justice system is only half complete. And like everyone else who loves the first part, I want more. The current system is clearly not finished. The AI for the city guards and other NPCs is quite avoidable, but it’s still a lot of fun.

I enjoy the Justice system even in its current state because it feels like I’m getting away with something. There is a thrill when you steal from the purse of a mob that’s higher level than you or an NPC that is surrounded by many other NPCs.

I hope that this system only gets better as it receives updates. Regardless of any future plans for the system, it’s fun to do right now at low levels — no endgame required.

I don’t think that I have to reiterate how deep the Elder Scrolls lore is. But it’s not just the lore itself that make ESO good. It’s the way the lore is presented. All Elder Scrolls games do this: You’re thrust into this world, and without any heavy exposition, you’re told to make your way around and discover the lore on your own. Even the opening scenes, of which I’m still not a fan, present pieces of lore to you without your even noticing.

I should make a distinction between lore and story. The opening scenes and early every part of the main story are super heavy-handed when presenting the story and the things you need to know about the Prophet and his companions. But the lore — the religious beliefs, culture, people, and history of the land — is just thrust at you with very little explanation. For me, that is part of the appeal of the game. 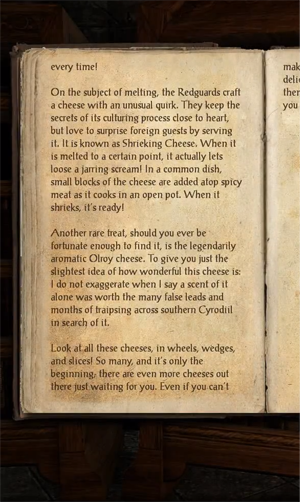 In the same vein as lore, there are many, many stories within the game itself that few people find because they don’t take the time to read the stories in the books scattered throughout Tamriel. I don’t fault people for just skipping right over them. They aren’t adding to the main story, and the vast majority of the side quests have nothing to do with them either. But as a lore junkie, I eat this up.

There was one in particular that stood out to me. It talks about the cultural differences between men and mer. It’s a bit of a dry read, but I think it’s telling of how deeply the creators of Elder Scrolls think about the cultures they are creating. Let me give you a quick excerpt:

“Simply put, the schism in the Human/Aldmeri worldview is the mortal’s relationship to the divine. Humans take the humble path that they were created by the immortal forces, while the Aldmer claim descent from them. It doesn’t seem like much, but it is a distinction that colors the rest of their diverging mythologies.”

This might seem like I’m saying the same thing over and over, but I’d like to make a distinction here. The main quest of ESO — the one that propels you from zone to zone — is kind of rubbish. It’s inconsistent in its voice acting, and although it plays off as being an urgent quest, there doesn’t seem to be any real sense of urgency about it.

But the side quests are entirely different.

It’s almost as if the writers of the side quests believed that these little excursions would not be remembered, so they did something crazy or actively tried to make the side quests more memorable. Who can forget the medallion that talks to you when you are in combat or the talking skull that wants you to find the rest of its body? Classics. Those were both side quests that never popped up again. And I love them.

As I said before, one of the primary reasons I don’t want to spend a lot of time in the Imperial City is because it’s so drab, which is in stark contrast to just about every other part of the game. I understand that this is intentional. There is supposed to be a contrast between the more pristine parts of Tamriel and the corrupted areas where Coldharbour is bleeding into Nirn.

The rest of Tamriel, even Cyrodiil just outside the Imperial City, makes for some of the most beautiful landscapes I’ve seen in any MMORPG. I often find myself just wandering, looking at the different things hidden around the game. I can’t say that there are many secrets because the maps and the many different plugins tell you exactly where everything is, but wandering is fun for wandering’s sake. There was one point at about level 15 or so when I found myself just exploring the Ebonheart Pact, and suddenly I found myself in Windhelm, a Skyrim city in a level 38 zone. Not many games make me want to do that anymore, yet ESO does.

Lastly, I want to talk about vampires and werewolves and the guilds and other story elements of the game that actually add to your character. Vampirism and lycanthropy add a skill line to your character, as do the Undaunted, Fighters Guild, and Mages Guild. Each of these questlines contains its own interesting bit of lore and story, and in the case of vampirism and lycanthropy, one player can pass it on to another player. It’s a rare MMO that has this mechanic. Although you need two different characters if you want to experience being both a vampire and a werewolf (unless you get cured, of course), these types of character quirks are the most fun for me.

Has endgame got you down? What are some of the things you do in ESO to help quench the rage? I’ve listed mine, but I’m sure that I’ve missed some great ones. Let me know what your favorite non-endgame activities are in the comments.

Traverse the troubled land of Tamriel in the Elder Scrolls Online. Larry Everett will be your guide here in Tamriel Infinium as you explore together the land created by ZeniMax and Bethesda. If you have any burning questions, send them his way via email or via Twitter.
Advertisement

It’s rather clear. Elder Scrolls Online from lv1-50 is a fun game. It’s the end-game systems that are complete garbage, and Zenimax has no idea what they are doing and how to improve things. So they add in another system that adds in even more grind, even though that goes against everything people didn’t want in the end-game.
It’s sad that a good MMO can be ruined by not even the end-game content, but just the end-game progression systems. I think 10 years from now, we’ll remember ESO and tell our friends about the Veteran Ranks and the Champion System and sadly that’s all the game will be remembered from.

ashfyn Ugh, Moria was the worst definitely my least favorite period in LotRO.

What’s weird is that aside from its endgame this game is so fun, maybe not always “good” but decidedly enjoyable most of the time.  I’d probably still be playing ESO if not for the continued growth of VR levels (a garbage system imo).  More than anything else I think ESO is really the game that cemented for me that I’m just done with MMOs that focus on vertical progression and endless grinding.

“wandering is fun for wandering’s sake”

And this is why I play ESO. Just like Everquest or The Lord of The Rings Online.

I need to get bitten!

crackfox I’m still using all vanilla as well. Even the U.I.

Robert80 ashfyn  I think that is all true, but my experience with my kin was still what I originally stated, people hated playing in the dark and didn’t like spending a lot of time there because they found it depressing.  I’m sure the other issues were mention also figured into it.

alexjwillis ashfyn I couldn’t agree more.  It was (and is) one of my favorite areas in the game simply because it was so challenging.  But I knew people who hated playing there and I shepherded more than one person through the depths and into the sunlight of Lothlorien.

Bannex19 Yup.  I’m pretty sure that is my opinion.  Steeped for at least 3 minutes.  I’ve played Skyrim for over 200 hours.  Grim Dawn for over 100.  But neither Skyrim no Grim Dawn is an MMO.